The cute and happy picture that the kids and the stray make tends to tower over the essential sordidness of the situation. 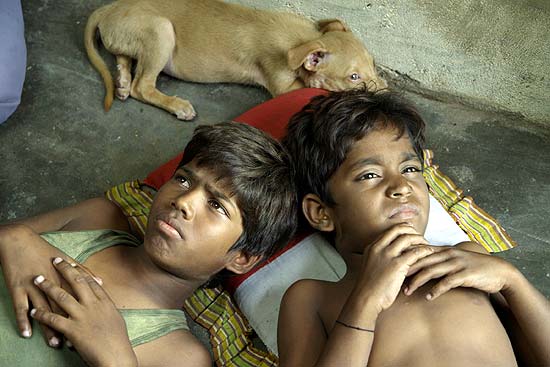 They are the unkempt, unbathed urchins. They have a toy watch picked off the streets and a stray dog for a pet. Across the colony gate is their friend from a well-to-do family, who sports a real watch and has been gifted a pug. There is that gate between them, they talk across it but never quite throw it open to mingle.

Kaaka Muttai is about obvious, unjust class div­­i­des—between the privileged and the depr­ived—in Chennai. But its characters could well inhabit ugly urban slums anywhere; the story could unfold in any impo­verished home. Debutant director Manikandan lays the details out unflinchingly—the shabby home with a kerchief-sized toilet rubbing shoulders with the kit­c­­hen, the open drains, the mesh of overhead wires, the haphazardly hung clothes, the daily rhy­thms of life—from fetching water to putting clothes out to dry.

This is the world of the resourceful brothers Chinna and Periya Kaaka Muttai (Vignesh and Ramesh) who live in the ghetto with their mother, grandmother and pet. They struggle not just to make ends meet but to have the locked-up father out on bail. The brothers, instead of studying, pick coal to add to the family income. They are called Junior and Senior Kaaka Muttai because they steal crow’s eggs and drink them up. They can’t aff­­­­­­ord hen’s eggs and, as their grandmot­her says, the crow might be black, but is a bird any­how. A throwaway line which differentiates the hen from the crow, the black from the fair, the haves from the have-nots.

Yet, the grimy life does not pull you down as most narratives of poverty are wont to. There are laughs, joys and wonderment for life’s little desires—a cellphone promised by the imprisoned dad, a TV procured on the ration card and a bite of the pizza from the new shop around the corner, inaugurated by a movie idol (Simbhu playing himself). Some moments are sheer del­ight. Like the grandma trying to make a pizza out of a dosa.

The characters around the duo get painted with broad brushstrokes, be it the kind-hearted friend Fruit Juice, the rapacious local politician, the expl­oitative businessman or the local goondas. There is not a false note in the performance of this family (Vignesh, Ramesh, Ishwarya). However, there is the flip side. The cute and happy picture that the kids and the stray make also tends to tower over the essential sordidness of the situation. For the audience, especially the multiplex kinds, it’s the tug-at-the-heartstrings, a feelgood element which makes the film that much more palatable. So we may get implicated in the plight of the Kaaka Muttais, but never neck-deep. Therefore, the build-up to the climax and the end feel a tad convenient. They might get us on our feet and feel good on having washed off the collect­ive guilt, but what after this catharsis? I was left asking questions not so much about the film as of ourselves.