Ruling out surgical strikes for the moment, the defence establishment considers the various war scenarios that could erupt along the LoC 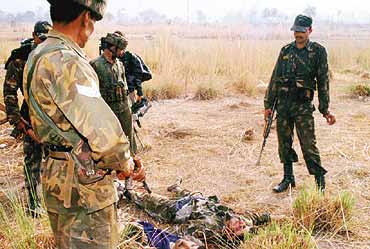 outlookindia.com
-0001-11-30T00:00:00+0553
The Indian army may have no immediate plans to cross the Line of Control (LoC), but Pakistan's sizeable build-up along the border in the Jammu and Kashmir and Punjab sectors in the last week has forced army headquarters to bolster its defences.

Army chief S. Padmanabhan is already on record saying there was no cause for panic, but considering the history of hostility which exists between both countries and the renewed military tensions, any misadventure could spark trouble.

Surgical strikes are ruled out for the moment. But military intelligence has stepped in and begun to draw out various war scenarios which could unfold along the LoC. "The Ops Room is where the top army brass spends most of its time, processing inputs which filter from strategic corps headquarters," says an army official.

The defence analysts and senior army officials involved point out that a flare-up in this particular sector of the military build-up would be suited to the Pakistani gameplan. To an international audience, the Pakistan establishment would be able to put out convincingly that it is disputed territory where they have a right to self-defence. What military experts also argue is that a short skirmish may not be possible and what could ensue is a war, lasting probably for a month.

"If this happens, it would be an asymmetrical war as the Pakistan army would be assisted by jehadi organisations like the Lashkar-e-Toiba (LeT) and others who could then attack our BOPS (Border Outposts)," says an analyst from the New Delhi-based Institute of Defence Studies and Analyses (IDSA). The possibility of other fronts being opened in this arena, especially by the jehadi groups, is a problem the Indian army has to contend with as it would be in the latter's interest to widen the scope of the conflict.

Security planners hence warn of an activation of the Pakistan-Taliban-Al Qaeda combine sleeper cells (dormant in India), which could open up small pockets of trouble should the Kashmir Valley become the opening flank.

While the force structure and the Counter Insurgency (CI) grid here is sizeable and capable of containing any incursion, the Indian army's foremost task would be to protect its supply lines and ensure that hinterland security is intact. "As we saw in the Kargil war, the disproportionate effort to protect each peak and every platoon is huge," says an official in army intelligence.

Operationally, with the element of surprise already lost, no professional army would indulge in such acts at this particular moment following the military build-up. But what could be India's options if further acts of terrorism, like the one on December 13, were to happen again? What if the terrorist action was bigger in magnitude? If the Indian defence establishment reserves the right to strike terrorist camps in Pakistan-occupied Kashmir (PoK) at a time of its own choosing, how effective will it be?

As Operation Enduring Freedom unfolded in the neighbourhood, military analysts argued that a majority of the 172 training camps in PoK were either disbanded or relocated following the US-led strikes. These temporary building structures and transit camps were spread all over PoK, providing most of the jehadi groups like the LeT, Jaish-e-Mohammad, Harkat-ul-Mujahideen and the Jamait-ul-Mujahideen the support base to operate.

So even if the Indian air force was to launch a series of surgical strikes and conduct heliborne operations, it would have to traverse 80 to 100 km inside Pakistan territory, after identifying the new camps. "The army would then have to sanitise the area from where it would operate," says a military intelligence official. Some of these new camps, according to officials in South Block, have shifted base and adjoin some important military installations. "If the air force pounds Skardu, for example, which is a regular cantonment area and a conventional target, then one has to be ready for reprisal action," says an official in army headquarters. The military scenario will then have to allow for an escalation and a full-fledged war which may not be fought in conventional terms.

Therefore, militarily, it would be in India's interest to widen the scope of a conflict and engage the Pakistan army in sectors south of Punjab, that is, in Rajasthan and Gujarat. "The collateral damage would be more and it is also the classical war where the area of operation is in the plains," maintain defence sources. Both the '65 and '71 wars saw a major chunk of the action in Rajasthan where the Indian army inflicted maximum damage. Opening up even the Gujarat sector, say operational experts, could prove a worthwhile proposition as certain areas like Sir Creek are still disputed.

The tactical space which the Indian air force enjoys may be hampered in the event of it being pushed into a full-scale war. "We know that the US has positioned some of their planes in some Pakistani airbases and the warships on the Indian Ocean have other foreign powers," says a South Block official. The strategic area for operations may therefore be limited to that extent.

By moving some of its strike forces, including armoured and mechanised units, closer to the border with Pakistan, the army wants to counter the Pakistan army's strike formations in the Chenab-Jhelum corridor and opposite Akhnoor. "This exercise is to prevent Pakistan's Border Action Teams (BATS) from launching attacks on our isolated BOPS," says an army official.

The movement strike formations on both sides is undoubtedly a manifestation of heightened tensions. The mobilisation of the Rawalpindi-based 10 Corps and the Bahawalpur-based 30 Corps, who have not moved back to their barracks after their annual military exercise 'Operation Khabardar', has set off a series of measures of redeploying and rearranging units on the Indian side.

It is for this reason that some of the army units under the Northern Command have moved forward while the Mathura and Bhopal-based strike corps are in operational readiness. "All this is precautionary, for the contingency of any Pakistani misadventurism," remarks a senior official. But for all the build-up, indicators forewarning a conflict are missing.

What the Indian defence establishment does know is that the new dispensation in Afghanistan is a cause for worry to Pakistan. Aware that it has lost its "strategic depth" with the ouster of the Taliban in ghanistan, Pakistan has shored up its defences.

And now, with an "unfriendly" government in place in Kabul, the Pakistan army establishment knows that its western front has become a problem area, for which reason it has deployed close to 50,000 men along that border. Having invested heavily in terms of material and money in supporting the Northern Alliance, India's military intelligence knows that it can exploit the situation and foment trouble.

The December 13 attack on Parliament has also led the security establishment to believe that General Pervez Musharraf may not be in total control of his army.With the screws on him being tightened by the US, he is going through the motions of distancing himself from militant outfits like the LeT and JeM and taking action against them.

But having effected changes in the top leadership and brought in new corps commanders, the Pashtoon element in the army and the Inter-Services Intelligence is restive, according to Indian military officials. It is this factor which worries the Indian army. Any possible retaliation by India could bring an undesirable union of sections of the Pakistan army and the jehadis. A nervous Pakistan establishment, then, resorting to the nuclear option is something the Indian army can foresee but not control.