The Left made a law that grossly undermined Bengal’s state election commission. As Trinamool unleashes pre-poll violence, an old tool comes in handy. 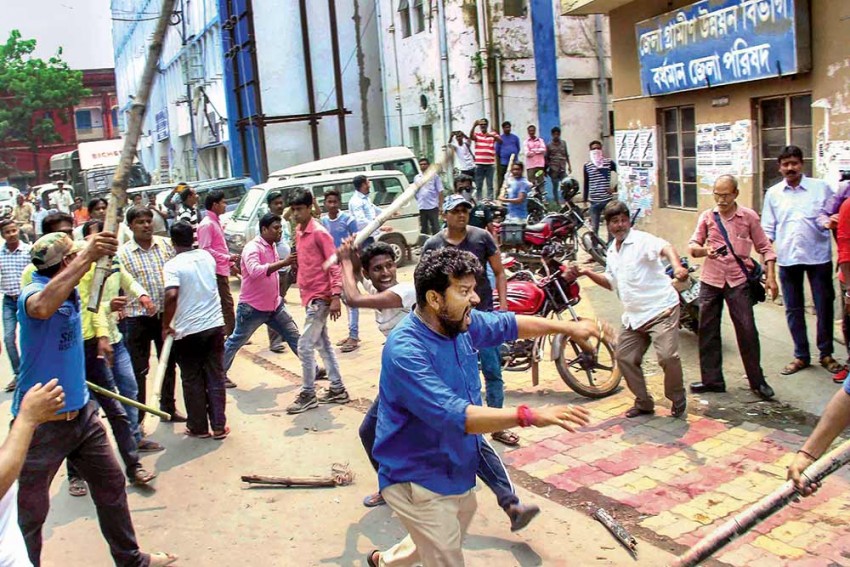 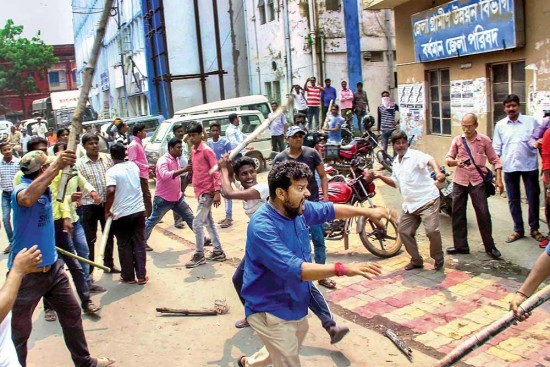 During his long stint as Member of Parliament, CPI(M) lea­der Basudeb Acharya was known as a fiery speaker who relentlessly pursued the cause of the people of his constituency—the backward district of Bankura in West Bengal—demanding, and often extracting, benefits for the tribal people of that reg­­ion from the Centre. Away from the cut-and-thrust of national politics, Acharya is soft-spoken and polite, his words touched by a disarming candour. During an interview to Outlook bef­ore the 2011 assembly polls, when his party was in power, he replied to a question about ‘rigging’—the control of polling booths by musclemen, usually from the incumbent party, of which his own 34-year-long government had often been accused. He stated that he would rather lose than stay in power by dishonest means. He lost to the Trinamool Congress candidate that year.

Seven years later, the 75-year-old veteran is languishing in a hospital bed. He was attacked by thugs associated allegedly with the Trinamool. They were trying to prevent him from entering the district magistrate’s office to help his comrades file nomination papers for the upcoming panchayat elections. It came in the middle of a shrill, rising tide of protests by the BJP and the Left against TMC violence over the polls. The road to ‘capturing boo­ths’ starts with the nomination process itself.

It has been an open secret that in Bengal, elections have been far from ‘free and fair’. Political analyst Biswanath Cha­­kraborty observers, “In West Bengal, once a political party gains power, there are systems in place—legal and not-so-legal—which keeps them ensconced.”

Not only did ‘scie­n­tific rigging’—an elaborate process, spa­nning several stages, which ensured real voters did not exercise their franchise—emerge during Left Front’s rule, but the government, which dominated the state legislature, also brought in legislation that helped ‘legalise’ its brutal area domination.

According to experts, the West Bengal State Election Commission Act of 1994 red­­uced the state elections (local body polls, including the three-tier panchayat polls) monitoring body to a toothless ‘instruction follower’ of the government. Chakraborty explains, “Nowhere else in India is the state election commission  (SEC) reduced to a mere ‘puppet’ in the hands of the state government.” Even if such laws exist in other states, say experts, nowhere is it as abused as in West Bengal. 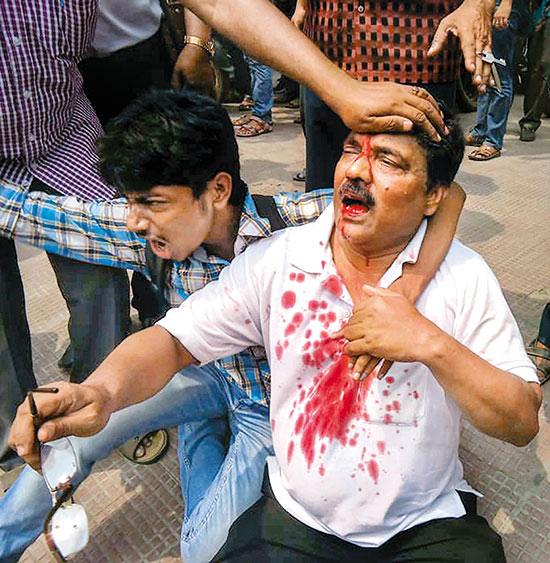 Photograph by PTI
Rigging has evolved from the Left’s days to assaults on candidates before nomination. Now, TMC men get elected unopposed.

The 1994 Act bestows the state with the power to decide on/accept or reject polling dates of local body elections. Furthermore, the very reason for the existence of and the appointment of the SEC is stated, according to the law, to be a discretion of the state government. Section 3.1  states, “With effect from such date as the state government may by notification, appoint, there shall be a commision, to be called the West Bengal State Election Commission.” Not surprisingly, officials of such a body would owe their allegiance to the state government.

The controversial legislation, says Cha­­kraborty, was enacted when the Left was in its 17th year in office. “Uninterrupted power made it feel invincible,” he says. “It felt it didn’t really need to ‘fight’ for power any longer. Practically, every institution belonged to them—whether it was the bur­eaucracy or the police. It was not difficult for them to ‘manage’ the polling process. Muscle power on the ground came from criminals—read ‘cadres’—who were given protection from any punitive action. The inevitable system of quid pro quo this spawned hugely undermined the maintenance of law and order in Bengal, but ens­ured that the status quo remained.” Chakraborty  adds, “It vests so much power in the state government that local elections, instead of being controlled by a neutral authority, become a prerogative of state mac­­­­hinery. This is obviously dangerous for the democratic process”.

Section 3 of the Act further states, “Subject to the direction and control of the State Election Commissioner, the district panchayat election officer shall appoint such number of officers of the state government to be the assitant pan­chayat electoral registration officer and assistant panchayat returning offi­cer.” In other words, key personnel of the state election commission, who are supposed to be objective monitors, are expected to owe their allegiance to the state government, or one of the leading contestants.

Section 8 states, “The State Government shall, in consultation with the Comm­ission...fix the date or dates on which, the hours during which, the poll will be taken.”

The law, framed and used by the Left during their rule, is now being used by the Trinamool to their advantage. Currently, opposition parties have demanded that Central forces be sent to man the booths during the Panchayat polls. The BJP has even filed a petition in the Supreme Court to that effect. Predictably, the state government has rejected the idea, as they are well within their right to do so vis-a-vis local body elections. Assembly and Lok Sabha polls, where the  Election Commission of India has the final say on matters of security, are a different matter.

The State Election Commission, pow­erless to go against the state governm­ent,  has been dithering. According to some opposition leaders, however, senior SEC officials have privately expressed his desire to endorse the support for Central forces to contain and pre-empt poll-rel­ated violence, though his stance has not been unequivocal.

In the meantime, parts of West Bengal—especially Bankura, Birbhum, Purulia, Din­ajpur, Midnapur, Murshidabad and South 24 Parganas districts—have rep­­orted largescale violence related to the filing of nominations. Bengal’s tradi­tional  poll violence is out in the open, with assailants brazenly brandishing FIR­earms, knives and bombs, and unabashedly roughing up opponents for no other ‘crime’ than that they had gone to file their nominations. In case after case, opposition politicians were dragged out of offices of district administrators and mercilessly slapped, kicked, punched, even stabbed. The police watched as mute spectators.

The bloodshed is just an indication that ‘scientific rigging’ in West Bengal has mutated since its days during the Left. ‘Rigging’ has evolved from being ‘booth capturing’ or ‘booth-jamming’, when rul­ing party goons intimidated polling off­­icers and prevented voters from reg­istering their own votes. It has passed through the stage when cadres went from door to door in villages, warning voters that they would be severely punished if they dared to go out to vote. Those who dared still were beaten up, even killed. It has even transcended the level when rival candidates were forced to withdraw their candidatures or face humiliation, even murder. Now, in add­ition to all that, ‘action’ is taken  in the nascent stage its­elf, before nominations could be filed, so that hundreds of seats go uncontested. However, it has to be mentioned that in Bengal’s panchayat elections, the category of ‘unopposed candidates’ have been a rising trend. In 2008, 5.57 per cent of can­didates won uncontested; in 2013, the number rose to 10.66 per cent. Under the Trinamool’s relentless pressure, the numbers might reach a new high this year. The TMC’s exertions bore immediate fruit too. As per reports, their candidates were slated to be ‘elected unopposed’ from 41 out of 42 seats in the Birbhum Zilla Parishad, and 14 of 19 panchayat samitis in the district. The same was the case across swathes of Murshidabad district.

In the meantime, to stand up to the menace, the state’s opposit­ion, namely BJP, the Left and the Congress, have decided to unite, not as poll partners, but to form groups for the collection and submission of nomination forms. Even this has faced obstacles, with reports that the state police has stopped delegations of opposition politicians on some pretext or other and delayed the filing of nominations till it was too late. Though the police have denied such charges, all three parties have cried foul, pointing out that many of their candidates couldn’t submit nomination forms. They have filed petitions in cou­rts for intervention and asked for an extension of the deadline. At first, their request was granted. On April 9, the state EC extended the final date for filing nominations by one day, to April 10. Then, on April 10 itself, they reversed their decision and stuck to the original April 9 deadline after a petition from the TMC. For the opposition, it was yet another sign of the SEC’s complete lack of autonomy.

“It is completely undemocratic that TMC is talking about an ‘opposition-free’ election,” says a Left leader, referring to a comment by a Trinamool leader. “They have no res­­­­­­­pect for the neutrality of the state EC.” Countering the charges, TMC points out that the “complaints about the state commission’s role should be reviewed from the perspective of the law that was formulated during the CPI(M) rule.” TMC leader Kalyan Banerjee says, “The BJP has already filed many nominations, which shows the charges are completely baseless.”

Analysts observe how the CPI(M)’s own child, the State Election Commission Act, 1994, has returned to bite it. Among its victims are true believers in “free and fair” polls, like CPI(M)’s Basudeb Acharya.

Squint Eye On The Postcard Boys