Just One Shark In The Deep Blue Ocean 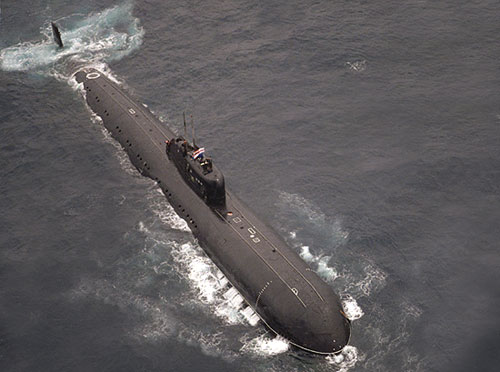 The making of a nuclear reactor to power a submarine started under Raja Ramanna in the late ’70s. But the project to build the nuclear submarine in parallel with dry-running the reactor at Kalpakkam began as the Advanced Technology Vehicle programme in the mid-’80s. Until then, it was not at all clear whether India’s first nuclear submarine would be a missile-firing one and, least of all, whether nuclear-tipped missiles were on the horizon. The order from Rajiv Gandhi to weaponise the 1974 nuclear device still lay ahead. But every strategist knew that a nuclear submarine of any kind was the final arbiter of power. Ramanna inducted Vice Admiral M.K. Roy, an aviator admiral and an old college buddy of his, to start the now famous Advanced Technology (ATV) programme to build a nuclear submarine. Again, rumour has it that the then navy chief, the much-admired Admiral Ronnie Pereira, felt that nuclear submarines were premature—that we should learn to walk before running. So, instead of the navy, the project took off under the DRDO and got off to a magnificent financial start as all their projects do. With an immense amount of money—not always accounted for under a visible public head—and with the ‘secret classification’, the project had complete autonomy. Later on, this secretiveness may have been the cause of the huge time overrun—as Admiral Vishnu Bhagwat accused in 1998, only to lose his post in the scandalous manner of his sacking.

The technical heart of this undoubtedly massive achievement was laid with the German HDW project. The overseas part of the project included three big ideas. One team representing Mazagon Dock would learn how to actually construct the body of the submarine—once it had been designed—and to commercially order the 21,000 parts that went into it. Another would oversee the building in Germany, to learn overseeing as well as to form the backbone of the construction team in the years to come. The third group would learn how to design submarines from ikl Lubeck, the German group that quickly recovered the war-time submarine building technology of the Germans. The submarine project, meanwhile, ran into heavy weather with the Deutschmark escalating from four rupees to fifteen. Naval headquarters lost its strategic vision and simply allowed the Mazagon Dock facilities to die. Grade A welders emigrated to Dubai, engineers retired, and eventually all that was left were designers and the knowledge passed on to industry, particularly dynamic companies like Larsen & Toubro, which actually built the hull of INS Arihant. Some of the young naval commanders of the overseeing team eventually became flag officers in charge of putting together the hull sections built by L&T in the Visakhapatnam Yard (incidentally a yard that was also designed by the same officers).

The naval hierarchy was overjoyed that a nuclear submarine was being built—less happy that it was a missile-firing one. Like navies the world over, it knew only its maritime strategy well, but ignored its nuclear strategy. Let it be said also that like all navies, it desperately needed N-subs, while the nation needed a missile-firing one. There is no acrimony here actually; because eventually nuclear subs earn their keep every day of the year. Ballistic missile submarines save nations on that one fateful day, when the enemy’s political leaders look at our SLBMS and stay their hand on the button. Living in a nuclearised neighbourhood, India, unlike all other nuclear submarine-armed countries, built a missile-firing submarine first, and will build a killer submarine later. Unusual, but not erroneous.

What is the strategic significance of this submarine? India’s nuclear doctrine is a no-first-use (NFU) doctrine. This is not so much a strategic choice, but a cultural one. It actually bridges the gap between India’s nuclear tests at Pokhran in 1998, and the Indian government’s long-held declaratory position against nuclear weapons, nuclear tests, the arms race and a nuclear winter. India, the government feels, has been compelled to go nuclear. But it seeks an ethical and moralistic path through the deterrence jungle. One way is to confine itself to an unshakable second strike offered only by ballistic missile submarines. So why didn’t it try getting there earlier? Because like all major strategic decisions in South Asia, certainly in India, the politician understands nothing, the bureaucracy puts its clumsy foot in frequently, and the military—still out of the nuclear decision-making process—is sulking. For the few genuine nuclear strategists in India, there is enough literature and mathematics to show that it will not be the cheapest from the point of view of funding—but it will be the cheapest surviving second strike arsenal, after a first strike.

So when can India hope to have this credible deterrence? The Arihant will probably go to sea operationally in early 2012. Submarines of the Arihant class can be commissioned only at intervals of 30 months, although two years is what is being claimed. So the currently sanctioned force of three will be operational by 2017. Long before that, the K-X—the successor to the 700-km K-15 missile, with a range of 3,000 km—will be ready. This force, with either type of missile, will be adequate for an anti-Pakistan second strike. Against China, the submarine will have to be moved closer to the targets and that will involve tactical and diplomatic challenges. These challenges are recognised by the navy and referred to as ‘battle space management’ problems. The Soviet navy had similar battle space management problems arising due to different reasons, but built their entire navy to win just that one battle. The Chinese have followed this catastrophic example by putting their new SLBMS into a cave. Will the Indians blindly follow? That depends on who will steer India clear of that mess, or the other quagmires still ahead of us—like ‘separating ownership from control’ of nuclear weapons in a submarine already on patrol.

These problems bring us to the calamitous news that India does not have a ‘nuclear staff’. It has a strategic force commander (SFC) with his own strong staff, but the PM, the NSA, and the chairman COSC have no nuclear staff. This is because New Delhi is one of the few capitals of the world where turf battles don’t just end in bloodshed but in the annihilation of an entire group—the military, the only people with operational staff knowledge, annihilated by the victors, the N-physicists, bureaucrats, intelligence-wallahs and DRDO scientists.

The Arihant has a diameter of about 10 metres. Submarine diameters are the key dimension. The US, which has the best rocket technology, is able to put its 8,000-mile ICBM within a 12.8 metre hull. The Russians were unable to confine an ICBM within a 12-metre hull and so their missile tubes protruded two metres outside the pressure hull. The future of India’s nuclear submarine project is entirely in the hands of the rocket scientists. Even if they get 5,000-km (3,000-mile) missiles inside a 10-metre hull, it would be an ‘adequate’ success. In terms of diving depth, submarines built in India are not inferior to the average submarines being built abroad. So although the Arihant has captured the imagination of India as a missile-firing submarine, professionals everywhere in the world will want to know what India’s industrial achievements are in this project. Little noticed may be the fact that the Arihant will have an entirely Indian-designed sonar. Will the Chinese Jin class also have a Chinese sonar, or a reconstituted French one? Since India began building the ATV, submarine reactor design has leapfrogged. The British Astute class and the upgraded Los Angeles will all carry lifetime reactors, unlike the Arihant’s 10-year lifecycle power pack.

The media has enquired whether the Arihant will qualify India for the Security Council. A nuclear navy and an slbm second strike force will undoubtedly take us there, but we aren’t there yet. For a start, we now need to declassify the nuclear submarine project and either build a bigger yard to reduce the interval between boats or build on the west coast too. An slbm force can’t be less than six. Killer submarines cannot number less than eight for a country of India’s size. To build 14 subs from 2010 onwards at the current rate of accretion would take till 2038, by which time Arihant would be due for pension. This isn’t the path to the Council.

The government needs to write a white paper on India’s Nuclear Submarine Force, deploying for it a panel of strategists, industrialists and nuclear engineers, preferably with bipartisan political support. A number of issues need to be addressed, including the indigenisation of high-quality steel, advanced reactors, financial support, management structure, diplomatic cover for overseas deployment, the navy’s hrd and safety issues in Indian and foreign ports.

Only the professionals remember that the outstanding achievement of the US navy’s submarine fleet came from path- breaking management of the N-reactor, submarine construction and the missile programme. The heads of these programmes went on to become international figures, having pioneered many techniques used today in industrial management. Our expat community is being hired worldwide for their competence. So we surely don’t lack talent. Why can’t we hire the best Indians to manage a national project?

(The author is a pioneer of the submarine service and has served on a British naval submarine, commanded two Soviet-bought submarines and headed the kiloclass acquisition and the HDW design technology transfer in Germany.)

The Castle, The Moving Forest