Home  »  Magazine  »  National  » mumbai, maharashtra »  Just Not In The Swing Of Things

Just Not In The Swing Of Things 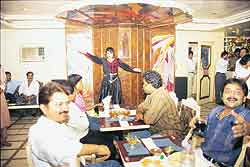 Bollywood has made dance bars a popular synonym for wine, women and song. Now, the state would have us believe that they are "a corrupting influence on Maharashtrian youth", and they must shut shop. But as government decisions go, it is ill-informed, legally skewed and administratively a non-starter. Deputy CM and home minister R.R. Patil, emotional after a debate in the state assembly on the subject, announced the ban on bars but excluded the ones in Mumbai. He had walked into a self-made trap, and dragged the government along too.

Of the 1,250 dance bars across the state, more than half are in Mumbai. To apply Patil’s logic, dance bars in Mumbai do not "corrupt the youth" but those in other areas of the state do. Strange, isn’t it? Not so, considering that bars in the city have ample political and/or police ownership and patronage. From bar girls to snack vendors to taxi-rickshawallahs, dance bars represent a mini-economy that support many households. Bar girls, faces dutifully covered, sat in a dharna to speak for "75,000 of our sisters whose families are dependent on them". Still, no one is condoning the dance bar culture: it also serves as pick-up joints or are conduits for the flesh trade.

But there’s more. Within hours, Patil was facing the wrath of both colleagues and bureaucracy. His cabinet colleagues are livid that the ban proposal was not even placed before a cabinet meeting. As procedure wasn’t followed, officials are finding it difficult to issue the government resolution too. So, until then, the bars won’t close. The ban also has financial and legal implications. Here’s what bar owners say they pay: Rs 2.75 lakh annually for a liquor licence, Rs 15,000 for a dance licence, entertainment tax of several thousands besides regular haftas to cops and fixers. Manjeet S. Sethi, president of the Bar Owners Association, added a new twist alleging a Patil colleague in the NCP demanded Rs 12 crore from him a day before the ban was announced. Patil has vehemently denied this.