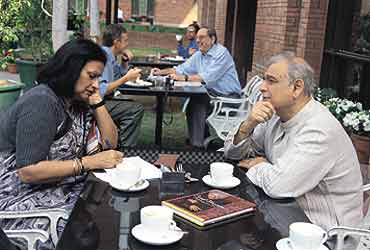 outlookindia.com
-0001-11-30T00:00:00+0553
Breakfast at the American Diner? Sure. I accept Ismail Merchant’s invitation with alacrity. Visions of waffles drenched in maple syrup, bagels with cream cheese and strips of salmon, hmmm and warm blueberry muffins swim before my eyes as I make my way to the India Habitat Centre. Surely the Houdini of the kitchen who charms his way into the hearts of his actors and financiers through their stomachs (and makes a permanent home there) would be a hearty breakfast companion. There is nothing quite as satisfying as a meal with a gourmet who talks food, between bites of it. Ismail normally does: the passion with which he describes the fish curries or biryani his sisters in Mumbai make is no less than the way he talks about a Merchant-Ivory film.

But breakfast that day is a bit of a side dish. The enticing aroma of sausages fills the air but our main course is the movies, and his books. And as we peck at our muffins and sip our cappuccinos, Ismail can’t sit still. He moves like a little tornado—between our table outside to the phone inside the diner. New York, London, Paris: he keeps getting calls. Ismail doesn’t need an office: he is a movable office. There’s lots cooking all over the world and he has to make sure the fires beneath it all keep burning. He is already on to the second volume of his autobiography. The launch of the first My Passage from India, which brings him to India, will be followed by My American Dream. The cineaste has ingenious method: whenever inspiration strikes he dictates it into a tape and a friend tidies up a bit after him.

And then there are the movies. Soon the "oriental adventurer"—as he says he was once described—and James Ivory will be "leapfrogging to many continents". To Venice for Two sisters in a Palazzo in Venice based on an original screenplay by Ruth Prawer Jhabvala and with the two grande dames of cinema, Vanessa Redgrave and Maggie Smith, who’ve never acted together. To Shanghai for White Countess in China, for which Ishigu Kashiguru is writing the screenplay: Vanessa Redgrave and Ralph Fiennes will act in this film set before the last world war. Redgrave seems a permanent member of the Merchant-Ivory, and along with Shashi Kapoor, a "lucky mascot". To India, perhaps—for a film starring Dilip Kumar. "Dreams come true and here’s my dream: to make a film with Yusuf Bhai."

He has another dream: to make a film with the Indian actors who were in their films. "We will have new heroes and heroines and the older ones will play the technicians. Shashi Kapoor will play a producer—he’ll play me to the hilt." Perhaps he is only dreaming. But then the phone rings and the tornado is back.