They aren't monied. Only mania pulls them to World Cup venues. 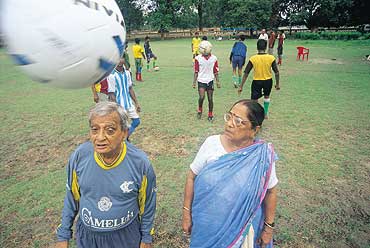 Pinching pennies has become a way of life for septuagenarian Pannalal Chatterjee and his wife Chaitali. As also with Pankaj Kumar Ghosh. Only, the difference between them and other tight-fisted people is that they blow up all their savings every four years—to go and watch World Cup football!

For Chatterjee, Ghosh and their ilk, the trip every four years is like a pilgrimage, as they join the masses to watch soccer stars in live action.

Ghosh is a football coach with the Sports Authority of India with a gross salary of just Rs 7,000 a month. A 54-year-old bachelor, he has been to the last two World Cups in 1998 and 2002. He’s going this time too—with loans. "I’ve borrowed about Rs 1.5 lakh from personal sources and Rs 70,000 from a bank. Reaching back, I’ll be saving as much as I can to repay all these loans. That’s till the 2010 World Cup," Ghosh told Outlook. Then, he’ll take another loan to go to the UK for the next FIFA World Cup. "I will have no savings to see me through my old age, but I can’t stop myself from pursuing this passion," said Ghosh, who’s played first division football for Calcutta soccer clubs in his younger days. This year’s trip will cost him Rs 2.5 lakh, including tickets for matches from the pre-quarterfinal stage. The final, he hopes, will feature his favourite—Brazil.

Chatterjee, who retired as a clerk with the Dock Labour Board, doesn’t take loans, but saves scrupulously for the "pilgrimage". Having gone to the last six World Cups with his wife, he knows how to get the best deals. "We sacrifice a lot to save money for the World Cup. It doesn’t matter that all our savings reach the zero-balance level," said Chatterjee, a member of the All India Football Federation’s technical committee and a key organiser of the annual Governor’s Gold Cup in Sikkim. "I get air fare to go to Sikkim for the Gold Cup, but I go by ordinary sleeper class and put the money I save into the ‘World Cup account’," he says. Chatterjee, 73, has played first division football. His wife Chaitali has been a "football fanatic" since she was in primary school. "We don’t need any luxuries in life. Just that we need to embark on this journey every four years," Chaitali told Outlook at her cramped two-room apartment.

Another such ‘fanatic’ is Goutam Sen, an assistant with the Corporation Bank’s branch at Howrah. "In 1986, I bought a colour TV to watch the World Cup matches that year. Ever since, I’ve wanted to watch the matches from the stands. But money has been a problem. Ultimately, a couple of months ago, I could arrange the money (about Rs 3 lakh). Once I return, I’ll start saving again to go to the 2010 World Cup," he said.

There are at least two dozen such Calcutta ‘football fanatics’—all from the middle-income groups. Once at the World Cup matches, they live on a shoestring budget. Chatterjee said he and his wife take dry food like flattened or puffed rice, narkeler naru (grated coconut cooked in jaggery and made into small balls), bhujia, dry fruits, biscuits. "The hotels we stay in serve complimentary breakfast and we stuff ourselves in the morning. In the afternoons and for dinner, we eat the dry food or, maybe, a burger or something that’s cheap," he added. Chaitali recalled that in 2002, some of their fellow travellers from the city even took dozens of boiled eggs along with them. "One raw egg costs Rs 80 in Japan, you know," she said.

Benu Dasgupta, chief executive of Leisure Sports Management, a sports management firm that has been arranging World Cup packages for people like Ghosh and the Chatterjees (and affluent clients as well) since 1982, says: "Hats off to these real soccer lovers. They carry Indian flags that they wave at the match venues. Some wear clothes embroidered with the tricolour—our ambassadors at the World Cup matches."