Just An Unjust Excuse For Abuse

Was the 'revolt of Qala PoWs' cause enough for US strikes? 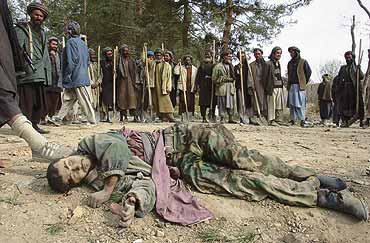 outlookindia.com
-0001-11-30T00:00:00+0553
Finally, human rights group Amnesty International has demanded a probe to determine whether or not the US and the Northern Alliance (NA) employed disproportionate force to quell the alleged rebellion of Taliban prisoners incarcerated in the Qala-e-Jangi fort in Mazar-e-Sharif last week. Hundreds of Taliban soldiers were killed over three days, mostly because of US air strikes on the fort, consequently violating the norm of not targeting hospitals and prisons in war.

The Qala-e-Jangi fort wasn't the only makeshift prison the US bombed. Eyewitness accounts trickling into Pakistan now say US planes also deliberately devastated a school in which 67 Pakistani Taliban who had surrendered in Kunduz were imprisoned. Incidentally, these volunteers hadn't even revolted.

No one knows what really happened in the Qala-e-Jangi fort and even western journalists are reluctant to accept the story Abdul Rashid Dostum and the US have been peddling about the prison revolt. The one reason is the sheer brutality the victorious NA displayed at Mazar-e-Sharif, massacring 900 Taliban troops in cold blood after they took over the strategic town a fortnight back.

The question everyone is now asking is whether the Taliban PoWs did actually revolt in Qala or was it portrayed as such to justify the US bombardment? Observers aware of the situation there say Taliban prisoners in the fort wouldn't have surrendered in Kunduz had they been willing to fight till death. And that too when they had been deprived of their weapons and lodged in the heavily-guarded fort. Could they have undertaken the veritable suicidal mission of revolting in Qala?

Some reports claim that trouble erupted when NA jailers started separating foreigners—Arabs, Chechens and Pakistanis—from the Afghan Taliban, suggesting it was a prelude to eliminating them. Another report claims some of the foreign fighters were shot dead there and then, provoking others to retaliate even at the risk of losing their lives. In the ensuing melee, the determined prisoners managed to snatch guns from the guards and had the NA running for cover. Ultimately the NA—as it had constantly done through the last month—called for American air strikes.

Theories about Washington's complicity have gained credence because the Qala massacre occurred days after defence secretary Donald Rumsfeld publicly said foreign fighters in Afghanistan should be either killed or captured instead of being accorded safe passage. Difficult as it would have been to connect the PoWs to Al Qaeda, their elimination would have seemed a better option. The massacre also had political advantages: the killing of Chechen, Kashmiri, Pakistani and Uzbek fighters would please India, Russia and Uzbekistan.

It's a first of sorts that jet fighters have been requisitioned to bomb prisoners. And it's all the more deplorable when the US itself has never tired of lecturing other countries on upholding human rights.

Homing In On The White Mountain