Just A Prawn In The Game 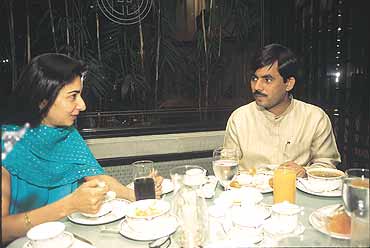 outlookindia.com
-0001-11-30T00:00:00+0553
Shahnawaz Hussain’s fondness for Chinese food is legion. It’s served up at all his lunches and dinners, formal or informal. So why he should have picked Le Meridien’s The Golden Phoenix, hardly top of the pops with serious Chinese foodies, is a mystery. Anyhow, he’s clearly a frequent patron. He strolls in, clad in an understated but unmistakably couture kurta, proving he isn’t textiles minister for nothing. One of Ritu Beri’s? No, although she did send him a kurta-pyjama from Paris when he took over. And she’s gifted him several sets in the past.

Picky about his wardrobe, he loves to strut his stuff in Parliament’s Central Hall, where the joke is that he changes portfolios as often as his kurtas. He knows all the designers on a first-name basis or rather, they know him. Now, he’s contemplating fashion events to promote Indian textiles, featuring woh safed bal wala shaks (Rohit Bal?) and woh lambey bal wala shaks (J.J. Valaya?).

His cell rings, just as a large dish of golden-fried prawns arrives. "No," he tells the caller, "I’m not on a date. We leave that to you Mumbaiwallahs". So is textiles all about cat(walkers)s and (clothes)horses? No, he says. It’s serious business, generating Rs 65,000 crore in exports and employing 35 million people. The bachcha mantri has clearly been studying, given the ease with which he reels off facts and figures. His greatest challenge, he says spearing the prawn, is figuring out how to survive in a non-quota regime.

A large slug of fruit juice goes down (alcohol is a strict no-no), followed by another prawn. And here comes the main course. It’s...chop suey. With all the variety on the menu, why chop suey? Simple, he likes it. Maybe it’s the house speciality? It better not be—the first bite is enough to make anyone want to snap his chopsticks into tiny little pieces which might actually have tasted better than the dish itself. He buries the crispies under a deluge of sweet and sour and digs in with enthusiasm. I concentrate on the salt-and-pepper veggies and Chinese tea and think longingly of the yet-to-be-served dessert (fresh fruit).

He’s philosophical about being moved out of civil aviation. After all, getting into the Cabinet is more than he could ever have hoped for. Until seven years ago, he was faffing around the Capital working on a diploma in electronics and mooning over a pretty schoolteacher at a west Delhi bus-stop. Then Uma Bharati took him under the BJP Yuva Morcha wing, married him off to his schoolteacher and the rest is history. So, mercifully, is the chop suey.

Trash Of The Fortnight : American Chai