A centuries-old annual migration must be turned back. On Bengal's Nepal border, man and elephant clash. A conservation effort is on. 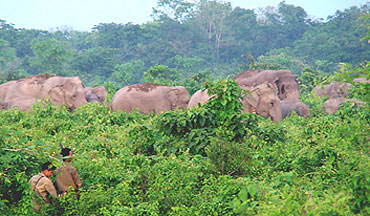 outlookindia.com
-0001-11-30T00:00:00+0553
Handling illegal migration across international borders is always an onerous task. But when the offenders in question are a herd of ninety-odd elephants, the task assumes jumbo proportions. In what was a first operation of its kind—and perhaps the biggest such exercise in the world—the West Bengal forest department successfully thwarted determined attempts by a set of pachyderms to cross the Indo-Nepal border for their annual feast of paddy and corn, driving the herd back into the Mahananda wildlife sanctuary about 60 kilometres from the border. The operation—involving more than 100 foresters, four kunkis (trained jumbos) and a 16-member "hulla party" (who beat drums and generally make noise)— lasted for a fortnight from June 23.

The entire north Bengal region and the eastern part of Nepal has been one contiguous elephant habitat for centuries. "The elephants have always been crossing the Mechi river into Nepal to raid paddy and corn fields. Of late, due to increase in the human population and the conversion of forests into farmland in Nepal, man-animal conflicts have increased. The herds have been destroying crops, houses and attacking humans there, leading to brutal retaliation from people on the Nepal side. Last year, they killed three elephants...this year, they have already killed two," Sumita Ghatak, Darjeeling's district forest officer (wildlife division), told Outlook. 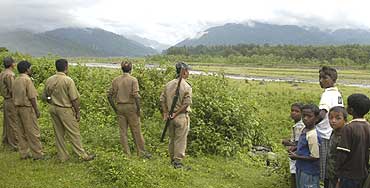 Long march: Forest guards and locals on a watch at the Balasom river, part of the annual "jumbo corridor" for herds coming down from the Mahananda forest range

In May every year, several elephant herds from Mahananda, Buxa, Gorumara and Jaldhapara forest reserves and wildlife sanctuaries in north Bengal merge into one enormous herd, and make their way through forests, tea gardens, army cantonments and human habitations to the Kalabari forest on the Indian side of the border, from where they stage midnight forays into farmlands in Nepal. "They eat the paddy and corn and return to Kalabari before dawn. Over the past couple of years, Nepal's security forces have been shooting at the elephants. Many jumbos have also got electrocuted on the live wire fences there," says Ghatak who, like her boss, principal chief conservator of forests S.S. Bist, was part of the operation.

The first incident on the Nepal side this year was on June 12-13, when police there shot at and injured an intruding elephant. "We launched a search operation on our side, found the injured animal and treated him. On June 18, we got information that a cub had got electrocuted and started an informal dialogue with the people and police from across the border to ensure they don't hurt the elephants. But on June 22 morning, we were informed that a female elephant was shot dead at Bamundangi in Nepal's Jhapa district. We launched the operation the next day to force the elephants away from the border and herd them back to the Mahananda," said Ghatak.

The pachyderms, however, refused to leave Kalabari for three days. "Crackers were burst, sirens were blown and we made forays into the forest with our kunkis. The hulla party made a huge racket, but all to no avail initially. These elephants have been going to Kalabari at this time of the year for centuries, staying there for about 45 days before returning to their habitats in north Bengal. The routine is deeply imbedded in their minds and it's very difficult to change that," says Bist. Wild elephants feed at night, sleep from dawn till afternoon and then start moving in search of food once again after dusk. "Our strategy was to disturb their sleep. We'd enter the Kalabari forest early morning, create a commotion till about 9 am and return once again at about 3 pm to repeat the exercise till nearly midnight. This particular herd had about 25-30 cubs and juveniles. Elephants are extremely protective of their young ones and any major disturbance that appears a threat makes them move to safer areas," says Bist. On June 25 evening, the elephants finally started moving from Kalabari and into the Dalka forest in Bagdogra range, about 20 kilometres from the border.

The next phase of the operation—to make them cross the Balasom river into the Bahunpukhuri forests—lasted another three days. The entire herd finally crossed the river on June 29 night. But once in Bahunpukhuri, the jumbos became adamant and wouldn't move back anymore. "We tried every trick to push them into the Mahananda forest, but were unsuccessful for nearly a week. Only on July 6 afternoon did they start moving into the Mahananda," Kanchan Banerjee, who supervised the operations for over two weeks, told Outlook.

The problem is far from over though. "We're still patrolling the edges of the Mahananda to ensure the elephants don't make their way towards Nepal again," says Banerjee. And even though the jumbos were sent back this time, forest department officers aren't resting easy. The need of the hour, they say, is a massive awareness campaign in Nepal to prevent the killing of elephants. Power fencing—not the live ones that kill but the pulsating sort that gives mild shocks—needs to be erected along the border. Also, human encroachments on animal habitat has to be halted immediately—obviously, if the jumbos had enough food in the forests, they wouldn't venture out. Unless all this happens, exercises like this will be an annual feature in the calendar of Bengal's foresters.