A TV sting, a tribal girl and a police IG, a sordid sexploitation tale unravels

outlookindia.com
-0001-11-30T00:00:00+0553
The story's as sleazy as they come. A high-ranking police officer caught with his pants down on camera. The reluctant recipient of his attentions: a tribal girl young enough to be his daughter. A sequence from the villain's den in a B-grade Hindi movie? Not quite. It's a video recording of a steamy day in the life of Ranchi Inspector-General of Police P.S. Natarajan. Natarajan's excesses are not just another sex scandal. It's symptomatic of a larger problem confronting tribal girls in Jharkhand. A tale of sexual exploitation, as systematic as it is sordid.

Natarajan was trapped in a sting operation undertaken with the consent of 22-year old Badaik (first name withheld). She told the press in Ranchi that she secretly got the act filmed and gave the cassette to a TV producer "in order to expose Natarajan". Badaik, whose case has now been taken up by the National Commission for Women (NCW), had approached the police in a bid to reclaim her son, now four years old, from her ex-husband and his family.

Her sad tale of exploitation began some years ago when she first approached the police in Palamu after her husband, the father of her infant son, was arrested for having Naxalite links. Her in-laws had thrown her out of the house and kept the child. Like any other woman in her position, she turned to the police for assistance. For her troubles, she claims she was raped by a junior constable.

This was to be the beginning of a long process: successive men in khaki pushed her into a position of sexual servitude. One in this line of sequels was then Palamu DIG, Parvez Hayat, whom she approached with her complaint. She has told both the NCW and journalists in Ranchi that Hayat compelled her to become a sort of sex slave. He even took her on a trip to Delhi. But he did not help her recover her son. (A 1984 batch IPS officer, Hayat, who has served as OSD to BJP leader and ex-Union minister Shahnawaz Hussain, is currently on deputation to the Centre in the economic affairs wing of the home ministry. He went underground after the scandal broke. He had earlier rubbished the charges, saying Badaik was "mentally unstable".)

The woman still didn't give up hope. After waiting hours and days in the corridors of government offices, she managed to complain about Hayat to the CM, Arjun Munda. That's when Natarajan, a 1975 batch IPS officer, came into the picture. With powerful connections in the police and bureaucracy (his cousin is UP chief secretary), Natarajan has long been a controversial officer but one who's always managed to avoid being investigated. Then, late last year, he was asked by the Jharkhand authorities to conduct a departmental probe into the tribal woman's charges against Hayat. Natarajan promptly gave Hayat a clean chit, saying "there is no substantial evidence to prove the woman's charge".

But clearly, the charges against Hayat had given Natarajan some ideas of his own. According to the woman's version, Natarajan began forcing her to have sex with him about seven months ago. The young woman has claimed that Natarajan began landing up at her house, pursuing her relentlessly, using a combination of threats and persuasion to compel her to submit to his demands.

Exhausted by years of sexual abuse, the woman then took a rather bold and unusual step to expose her tormentors. She approached the Ranchi representative of a TV production house and offered them the sensational "scoop" on a platter. So wretched was the woman's position that she didn't even mind degrading herself further on national TV in order to punish the men who had made her life a living hell. And since Natarajan was a high-ranking police official, besides being a well-known figure in both Bihar and Jharkhand, the TV channels were interested. The trap was set. Natarajan just had to shed his clothes.

Following the broadcast of the Natarajan tapes by two TV channels, the IG has been suspended and an inquiry ordered.He is also likely to be arrested as he faces criminal charges under section 376 and 109 of the Indian Penal Code besides charges under the SC/ST Atrocities Act. Meanwhile, the Jharkhand government has also requested the Centre to suspend Hayat. The NCW has asked the state government to prosecute both officers, complete the probe within two months and hold hearings in a fast-track court. For good measure, the commission has also asked the state to rescue the woman's son, pay her adequate compensation and make all arrangements for her long-term rehabilitation.

But what of the larger question, the systemic exploitation of tribal girls in the region? Harivansh, the editor of Prabhat Khabar, Jharkhand's biggest daily, says this case per se caused a stir partly because of the sensational nature of the expose and partly because it touches on the sensitive issue of exploitation of tribal girls. "No one is doubting the woman's story. All political parties are unanimous in demanding justice for her," he says. 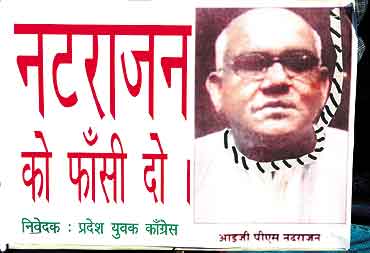 Indeed, the exploitation of tribal girls has always been a public issue in the region. Mostly innocent and easily lured, young girls leave the poverty-prone region in droves seeking employment in other states. While some do land legitimate jobs as domestic servants, their naivete about the ways of the world make them vulnerable to all sorts of exploitation. Some end up working without pay, some are forced into the flesh trade, others exploited in homes where they work. The Jharkhand belt abounds in tales of lost innocence and exploitation.

Perhaps why the Natarajan saga could snowball into much more than a sex, evidence and videotape case. With more sordid details on the case coming out every day, it has now serious social and political overtones. The police has already arrested a teacher in the local Cambridge School, Madhupriya Ganguly, for "abetting and aiding" Natarajan's sexual escapades. Ganguly lived in the same apartment where Natarajan was filmed having sex. In fact, officials say the rent of the flat in the posh Kalinga apartments in Ranchi was paid by Natarajan.

Ranchi SP Anil Palta says Madhupriya has confessed to being witness to the "pressures" exerted on the tribal woman for sexual favours. A graduate of Calcutta's Jadavpur University, police believe Ganguly's role in the whole sordid affair is "highly suspicious". There are also reports that the police have recovered other recordings of Natarajan and Ganguly engaging in various sex acts. Badaik too has told the police and the NCW that Ganguly kept pressing her to submit to Natarajan.

At the end of the day, it does indeed seem the victim in this case may get some sort of justice. For the moment, at least, her fate is of great concern to all political parties and women's organisations. The farce of it all is that this young tribal woman had to strip to get noticed. Still, at least she can now dream of retribution.

The King And Us