Judging From This Case... 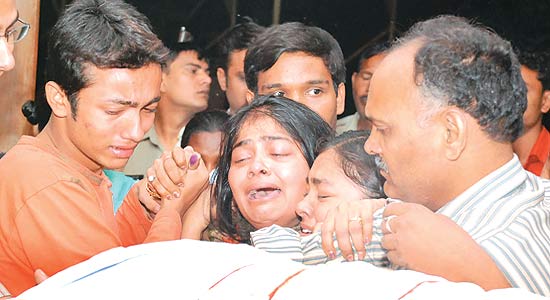 The day before he died in judicial custody, Ashutosh Asthana, the key accused in the Ghaziabad district court  provident fund (PF) scam case, had met his family in Dasna jail. “He seemed cheerful though he’d been questioned for five hours by the CBI,” says his brother Shreesh. “There was nothing wrong with him. He wasn’t under medication. We always feared he’d be bumped off. It’s all a mystery.”

Indeed, the October 17 death of the 43-year-old Asthana, who was in charge of the court treasury, twists the case in a way that might seal in details of who all benefited from the Rs 23 crore fraud, in which Asthana himself is alleged to have made Rs 7 crore. His family alleges he might have been poisoned; the Supreme Court has ordered a judicial probe into the death.

After the fraud was first uncovered, Asthana had, in an April 2008 statement before a magistrate, named 33 judges, including many high court judges and a sitting judge of the Supreme Court. He alleged that these judges had pressurised him to make fraudulent withdrawals from the PF monies of Class iii and Class iv court employees and that the judges had all benefited from his actions.

His brother’s fears may have been well-founded after all: not only is it public knowledge that Asthana feared for his life, he’d also stated on affidavit in the special court, Ghaziabad, on August 29, 2008, that some judges were turning the screws on him—through his co-accused and through jail officials—seeking withdrawal of his statement naming them. Curiously, he had filed two affidavits that day, one at 12.30 pm and the other at 3 pm.

In the first (court file No. 38 kha), he gives a clean chit to a former additional district judge of Ghaziabad, who is now a judge in the Allahabad High Court. It says: “I have earlier named (justice) S.C. Aggarwal in the statement recorded before the magistrate under Section 164 (of CrPC). I was under pressure and not in the right frame of mind and there was constant pressure from Rama Jain (the vigilance officer), investigating the matter, to include S.C. Aggarwal’s name. I mentioned Aggarwal’s name because I was harassed. Shri Aggarwal is in no way linked to the scam.”

Asthana feared for his life and told the court he needed protection. It seems he didn’t get it despite court orders.

But his 3 pm affidavit (court file No. 40 kha) says the opposite: “In my statement...I have named several judges of the lower and higher judiciary. As a result, I am being pressurised and harassed at various levels to withdraw some of the names I have mentioned in the statement. I have also been asked to give in writing that they have been wrongly named in my statement. Some of the judicial officials are forcing me to do this. So I pray that no affidavit in this regard should be considered by the court.” He then said he stood by his original April 2008 statement.

“My client was facing threats ever since he recorded his statement,” says S.C. Saxena, Asthana’s lawyer. “In fact, we had been approaching the court to seek protection. Since this case involves many judges, he feared the worst. Even 15 days before his death, I had informed the court about the threat perceived by my client.” Saxena had told the court on July 7, 2008, that “constant pressure tactics” were being used against Asthana to force him to retract.

Saxena also alleged in court that the jail authorities had forced a confession out of him, in which he had to own up to the whole scam and absolve all the co-accused. In that confession, which he later retracted, Asthana also stated he was “ready to sell off his property and repay the money swindled money” and requested the court to attach his property. According to Saxena, the confession was recorded on July 5, 2008, but submitted on July 18 with the date altered.

There’s no doubt now that Asthana’s fears were not without basis. In fact,  junior court officials named in the case even assaulted him in the court premises on February 6 this year as he was waiting in transit remand. He later petitioned the court seeking protection, which was apparently not provided despite  orders from the special judge of the Ghaziabad court.

Asthana’s death in jail is therefore a tragic and sordid development in a case shadowed by allegations of deep and widespread corruption in the judicial system, a topic in raging currency. For,  Asthana’s detailed statement was the core of the evidence: he named seven judges who cleared the withdrawals, stated that the money had changed hands only through him and even provided bills of purchases made on behalf of judges and court officials. The bills Asthana provided indicate that one judge had obtained over 30 mobile phones in a short period of time.

The scam came to light on February 15, 2008, when Rama Jain, the vigilance officer, acted on court staff’s complaints about provident fund withdrawals they had never made. She alerted the Allahabad High Court, which asked her to file an FIR. But police investigation was slowed down by the fact that judges would have to be questioned. Then Nahar Singh Yadav, a former president of the Bar Association of Ghaziabad, filed a PIL in the high court seeking a CBI inquiry into the scam. The high court laid down guidelines for the police investigation but still there was little headway. So Yadav approached the Supreme Court, which ordered a CBI inquiry. The investigators filed four status reports and told the court they were awaiting forensic verification of documents and signatures. In the middle of this, Asthana died.

Dr A.K. Singh, who headed the team that conducted the post-mortem on Asthana’s body at M.M.G. Hospital, Ghaziabad, says he has valid reasons to suspect the man may have been poisoned to death. “When we received the body it was blue, which points to likely poisoning,” he says. “But more forensic tests alone can conclusively prove the exact cause of death.” The CBI has been directed by the Supreme Court to take Asthana’s viscera for corroborative tests at aiims.

Asthana’s family members, living through an ordeal ever since the scam broke, had particularly been in fear in the last few months. Now, their fears have come true. And this could well lead the investigations into a wall.