Remember, believable injustice is a lot better than unbelievable justice. 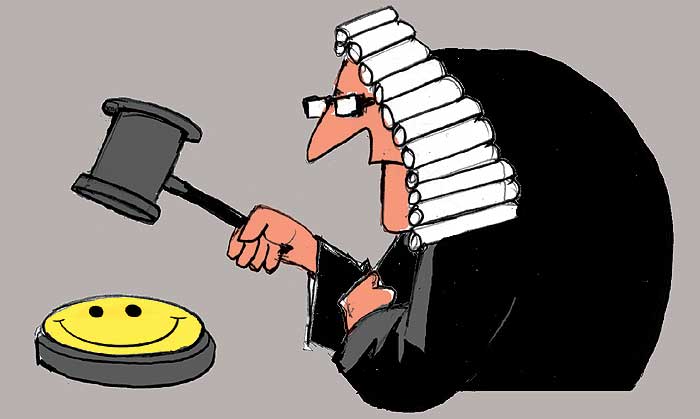 Allow me to introduce myself. I am James Ponnappan Ali Eyre, native of Jagathy, Thiruvananthapuram, Kerala (aka God’s Own Country (oops!) Liquor). Anyway, being the seniormost judge of the three-man bench of the ‘high’ court of Bacchanaliapuram I have been given the privilege of putting on record some of the cases we intend to adjudicate by putting  belief/faith above the law. In fact, we have been in touch with lawyers and an opinion poll agency (the much-trusted Murugan and Saini) who have promised to file a slew of petitions after ascertaining the belief of people on various issues. M&S have even arrived at a sample size which will help them determine what people believe (984 male/female respondents in the age bracket 5-70 across 98 cities and towns, 110 villages and 500 bus stands/milk kiosks).

That apart, the lawyers have been rather petition-happy and have come to us to vet the cases they propose to file. Some of them, I have to admit, are rather bizarre but then as George Orwell put it, “To see what is in front of one’s nose requires a constant struggle.” Also, belief is belief and it’s above the law (certainly not below it).

Anyway, all such banalities aside, let me share three of the proposed petitions which I and my fellow judges are looking at:

Rum is headier than rasam which in turn is better than eating chalk: This has come from Chanakya Puri, a wily Punjabi lawyer who lives on an island off Kochi. His plea is backed by a survey which reveals that 80 per cent  gave their preference for rum while 12 per cent felt rasam laced with vodka made for a fiery ‘bleddy Mary’. And  six per cent of the respondents shook their heads to convey the DK/CS sentiment. The remaining  two per cent felt chalk was good if eaten with cheese.

Nutan of Malappuram discovered gravity: Suggested by a lawyer from Kozhikode, the plea is that Nargis Nutan discovered gravity in 1550, more than 100 years before Sir Isaac. Apparently, she was sitting under a jackfruit tree in what is now Down Hill when a 36 kg fruit fell on her. She immediately understood what gravity and a swollen head was all about and recorded her findings in a notebook. “It took more than an apple for Nutan to discover the magnetic pull of the earth,” notes the petition. Interestingly, a survey among schoolkids of Malappuram revealed that a majority (96 per cent) firmly believed that Nutan discovered gravity although 62 per cent preferred apples to jackfruit. Nonetheless, I must acknowledge this is a case of much gravitas.

What comes down must go up: This one comes from an aviation correspondent of a local newspaper. An M&S survey has revealed that an overwhelming majority (96 per cent) were of the view that if a plane lands, it will take off at some point in time. Some four per cent respondents refused to answer since they didn’t fly and so didn’t care.

With cases like these, the bench has busy days ahead. But then, remember, believable injustice is a lot better than unbelievable justice.