The Muslim leadership fights delayed justice, but will a court's verdict mend the tattered fabric? 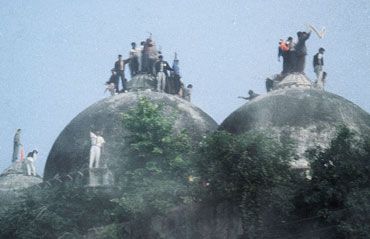 outlookindia.com
-0001-11-30T00:00:00+0553
It's an age-old legal conundrum, the one over 'Ramjanmabhoomi', which the Muslim leadership doesn't want to prolong any longer. The Ayodhya title suit, set into motion by the Sunni Central Boards of Waqfs, UP, and others in 1961—at the end of a sporadic legal history of over 80 years—has progressed at a painful snail's pace in the Allahabad High Court ever since (see box). This has forced the Muslim leadership to cut short its long list of witnesses to be produced before the special bench of the court that is hearing the case. With only 17 witnesses having been examined since 1961, the Muslims have realised the futility of such an exercise and they have now decided to produce only eight more witnesses so that "the judgement cannot be delayed any further".

They are, however, not sure whether even that will help expedite the case. They accuse the vhp for the inordinate delay in the court proceedings. According to Mohammad Hashim Ansari, the original petitioner, the Sunni Waqf Board had originally filed a list of 120 witnesses, but pruned it because it's not possible to produce all the witnesses.

"They were the ones who had offered namaz in the Babri Masjid till 1949. The opposite party deliberately takes several days to cross-examine each witness so that the case lingers on. Their idea is to delay the case long enough for the old and the aged witnesses to pass away so that there is nobody left to testify that namaz was ever offered at the masjid," Ansari told Outlook. He adds that it would have been in the fitness of things if the other party (the vhp) was asked to produce their witnesses first. "Instead, we were asked to come up with our witnesses first. Our witnesses are ridiculed in the court by the opposite party."

Abdul Mannan, the lawyer who is representing the Waqf board, blames the vhp lawyers. "We take not more than a day to examine a witness, whereas they take more than a day to cross-examine the same witness. I feel all this is part of deliberate delaying tactics." The Muslim leadership is not very enthused either about UP chief minister Rajnath Singh's statement on expediting the case. Says Mannan: "On the ground, the picture is rather different. It's very simple to issue such statements."

Besides some contempt-of-court cases pending with the Supreme Court, the Babri Masjid-Ram Janmabhoomi dispute is being examined at three levels:

The main case pertaining to the land dispute began way back in 1950, just after the surreptitious installation of idols in the Babri Masjid premises on the night of December 22, 1949. It is this case that underlies the decades-old acrimony—initially localised, and assuming a national scale since the mid-'80s—between the Hindus and the Muslims. The apprehensions of both the parties, vis-a-vis the ultimate outcome of the case, are not misplaced as there has been virtually no progress on it. All the three judges of the special bench hearing the case are based in Allahabad. They have to come all the way to Lucknow whenever a date for hearing is announced. This creates logistical problems. That apart, even a hasty high court judgement is not going to be of much help.The aggrieved parties will then move the Supreme Court whose judgement will be final. But going by Prime Minister Atal Behari Vajpayee's heads-I-win-tails-you-lose approach, the Muslims will still have to wait even if the judgement is in their favour.

Here, Vajpayee's statement given last year in New York becomes all the more significant. When asked pointedly about the construction of a Ram temple at Ayodhya, Vajpayee assured a vhp-sponsored nri gathering in New York that once the bjp comes to power with an absolute majority, all dreams will become real. In his second public statement in the beginning of this year, when he apparently snubbed the vhp by announcing that nobody will be allowed to take the law in their hand, he subtly remained non-committal on the issue of implementing the final Supreme Court judgement, saying that a conducive atmosphere was necessary to do that. That explains precisely why the Muslim leadership takes Vajpayee's 'secular musings' with a pinch of salt.

With the vhp toughening its stand on the issue of temple construction and very little progress being made by the high court, there seems to be no light at the end of the tunnel. After former Bajrang Dal chief and bjp MP Vinay Katiyar's talks with Muslims leaders in Lucknow—picked up from the street, as former MP Syed Shahabuddin puts it—turned out to be a damp squib, the vhp has suddenly become aggressive again. All said and done, its claim that it is ready to confront the Centre may just be public posturing aimed at placating their cadre—the vhp leaders declared in Allahabad that Prime Minister Vajpayee's assertion that nobody will be allowed to take the law in their hands is not binding on the vhp.

The vhp has, time and again, gone on record saying that nobody—not even the courts—can stop the construction of the Ram temple. When the Babri Masjid was demolished, the parivar blamed it on the courts saying that the judiciary failed to deliver an order before the kar seva began. "How can you talk to people who say 'we will do what we want to'. Initially they said that we'll start construction outside the disputed area. Their argument was that a lot of time would have elapsed to begin construction on the garbhagriha (sanctum sanctorum), by the time the courts delivered the judgement. But that was just a tactic. Therefore, when Advani offered to do that, we totally rejected it," says Shahabuddin.

But the main stumbling block for the vhp is the 'Acquisition of Certain Area at Ayodhya Act' passed by Parliament during P.V. Narasimha Rao's prime ministerial tenure in 1993, which authorises the Centre to control the 67.703 acres of land in the Ram Janmabhoomi-Babri Masjid complex. The white paper on Ayodhya brought out by the Union government then declared: "The acquisition area excluding the area on which the disputed structure stood would be made available to two trusts which would be set up for construction of a Ram temple and a mosque respectively."

More importantly, a clause in the Act maintains that the disputed land will be handed over to the trust or a group of people formed after the promulgation of the Act. This effectively means Parliament will have to change the Act to implement the final judgement. And that could well prove to be a long-drawn process.