The swish set is drooling for the more hip and happening white metal. For them, gold now is too loud and vulgar. 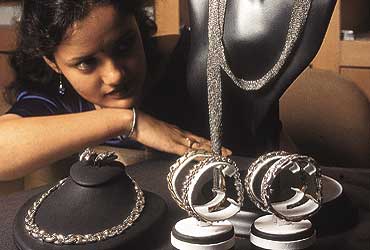 outlookindia.com
-0001-11-30T00:00:00+0553
When 35-year-old architect Sushil Pandit wanted to gift his wife a piece of jewellery on her 30th birthday, he couldn't take his eyes off a stunning diamond-studded platinum pendant. The price too didn't dig deep into his pocket—only Rs 15,000. A small price to express his love! And, for a change, his choice was not limited to gold alone this time.

Suddenly, all that glitters is definitely not gold. Maybe white gold in some cases, which is actually 18-carat gold polished to a very pale yellow. But now, for an increasing number of Indians, platinum, also the most precious white metal in the world, is a prized possession. It may still be confined to the cream of the urban upper class, but this white fever is catching fast. Take a look at the figures—jewellers expect platinum sales, at Rs 6 crore now, to swell by 30-40 per cent in a year's time.

Curious why Indians, who've always preferred to wear, display, flaunt, inherit or safe-keep solid, gaudy gold jewellery that matched traditional ethnic wear, have now taken to the dull platinum like ice candies in summer? Economic prosperity, to some extent. With incomes going up across the scales and gold prices remaining stagnant, or getting cheaper, a section of the discerning customers are loath to wear gold anymore. "Even my bai wears gold," they lament.

But, more importantly, it's the affordability and easy availability of diamonds in the last few years which is making Indians drool like never before. And diamonds are best set in platinum—remember, even the renowned Kohinoor is set in platinum for posterity. All over the world, these precious stones are mostly set in platinum because it reflects their true colour, and, because they are harder than gold, it holds them secure.

The desire for diamonds is deep and that explains the swelling market. De Beers, the famed South African mining monopoly, has understandably fanned this new-found liking and India today is their fourth largest market. Says Deepak Mehra of Ashwani Kumar's Mehrasons, one of the oldest jewellers in the capital: "Diamonds accounted for just 10 per cent of our entire sales eight to ten years ago. Today, thanks to the marketing efforts of De Beers, the ratio is 60 per cent."

Encouraged by this success, the Platinum Guild International (pgi) is now planning to do a De Beers in the platinum market. Founded in 1975 by a leading South African platinum producer to market this peerless metal, pgi officially launched it in India last year in September. And in the mere 10 months or so since the Indian retail market got initiated into platinum, the white metal seems to have spun its pristine magic. Says Vaishali Banerjee, pgi's country manager: "Starting from a zero base, platinum today has a turnover of Rs 6 crore." Trade circles dub this a "very good" achievement.

pgi certainly has ambitious plans for India. Says Banerjee: "We are not here for short gains. Our aim is to capture one to two per cent of the gold market in the next five years." That's 9-17 tonnes, considering that gold consumption touched 855 tonnes last year. India remains the world's highest user of the yellow metal. And the jewellery market, which stands at Rs 45 crore, is made up almost entirely of gold. But the change that De Beers has brought in will certainly help pgi achieve its dream faster. While the more traditional diamond jewellery is still set in yellow gold, eighty per cent of European style jewellery is already set in white gold.

How long then before platinum replaces white gold? pgi has authorised about 10 stores each in Delhi, Mumbai and Bangalore to sell platinum designs. It also provides all the retailers under their wing marketing and technical support. But why so few stores? (It just has two authorised manufacturers in Mumbai.) Because it's not an easy metal to work with—it melts at very high temperatures and a goldsmith can't naturally shift to platinum. The guild has decided to limit the scope of production initially to safeguard quality, but there are plans to expand as and when demand rises. Says Mehra: "Today platinum accounts for four per cent of our total sales. At present, we have Rs 20 lakh worth of stocks with us. Earlier we would do the odd piece on order. But in the next couple of months, we'll see sales increasing by 30 to 40 per cent." The designs available in the market today are lightweight and largely single pieces, with the price ranging between Rs 10,000 and Rs 20,000. But jewellers like Mehrasons are already toying with the idea of stocking heavier and more expensive pieces like full earrings and necklace costing around Rs 1.5 lakh. pgi plans to cover all the major Indian metros before the buying season—Diwali—begins in October.

The guild's foray into the Indian market came after two years of carefully studying trends and consumer preferences in the jewellery market. It absorbed the results of a research study conducted by Momentum, a Bangalore-based agency, on upper class women in the age group of 25 and 50. Says Dharen Chadha of the agency, who merged his MR company with ad agency Dhar & Hoon: "Our study indicated that many people were getting tired of gold. It even meant loud and vulgar for many." The research also identified clear-cut preferences—gold for pujas and weddings and diamond for corporate parties. But for many discerning women, it was a metal for self-expression. The market obviously existed, but there was a crying need to educate the public a la De Beers. And thus the ad: "Are you woman enough?". Armed with this punchline, the agency tried to provoke women into making a statement with platinum.

The ads also tried to break barriers to cast the platinum spell. Says Chadha, now the MD of Chadha, Dhar & Hoon: "Advertising largely focuses on motivation and not on barriers. You need to plug into the motivation so hard that the barriers disappear. When you buy diamonds because they are a 'symbol of love', you are hardly thinking of their resale value." For the Indian consumer however, issues of quality and price are always crucial. Just as De Beers broke the myth that diamonds were too expensive to buy and had little resale value, pgi is planning a major PR and marketing drive to bring about consumer awareness.

While the pgi quality stamp gives authenticity to all pieces, the price barrier was sought to be broken with the introduction of lower-value products. But the fact remains that it still is the costliest metal and several times dearer than gold. It's also very rare—less than 200 tonnes of platinum is mined every year, compared to over 2,000 tonnes of gold. If today the price of 22k gold per 10 gm is a little over Rs 4,000, for 95 per cent platinum the price is about Rs 900 per gm. White gold is priced at around Rs 3,330 per 10 gm. If a 7 gm platinum ring with 14 cents diamond costs Rs 18,000, the same diamond in equal weight of gold cost around Rs 13,000. Most jewellers charge Rs 100 per gm for gold jewellery as labour charges. But for platinum, it is usually a percentage of the total price of the piece. For example, on a Rs 18,000 piece, the labour charges will be around Rs 3,000, ie 20 per cent.

Right now, such small price differences are whetting the appetite for platinum. Mehra claims they now have more walk-in inquiries for the platinum range as opposed to those for gold. The swish set is moving towards the hip and happening white. Platinum, in the meantime, is also getting the odd traditional lookover. Says a jewellery designer: "It's not entirely the well-travelled and well-heeled Mercedes-owning public. The profile of platinum buyers is surprising. I even have 60-plus women asking for it."

True that the Rs 40,000-crore global jewellery market saw a 19 per cent growth in platinum consumption in 1999. Japan, China, and recently the US, are the largest markets—together they account for over 90 per cent of the total demand. India's share in this is less than one per cent. It may be too early to think of a change in that share, because the premium nature of this metal will always ensure it has a niche market and an exclusive tag. But as long as India's vast domestic market remains susceptible, platinum looks set to win bigger territories.