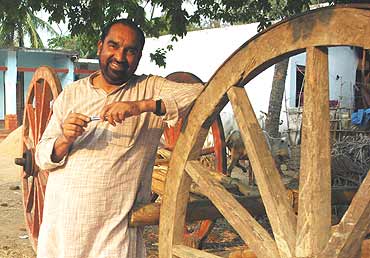 Three decades ago, when Joe Madiath was just an angry 21-year-old college Marxist spearheading a team of volunteers from Madras in cyclone relief work in Orissa, he noticed the absence of sanitation systems and the resulting mire of disease. When the relief work panned out, he stayed on to do something about it. Water contamination because of open defecation is still responsible for 80 per cent of rural disease in India. But as Madiath sees it, a toilet is not simply a safeguard against infection—it is a platform for dignity and social inclusion. Gram Vikas, founded by Madiath in 1978, now works with nearly 2,00,000 people in 559 villages in 17 Orissa districts—building biogas plants, water tanks, pipelines, toilets and complete sanitation systems. "If cities cannot contain any more people rushing there, we must create a threshold quality of life in the villages—or the cities will become unlivable too," says Madiath. But Gram Vikas needs one pledge—before a project is initiated in a village, every single household must agree to participate and contribute their labour and resources to a shared corpus, thus making them the agents of their own salvation.