Instead of offering history neat, it takes ample liberties and it's the resultant cocktail that's heady. But it sinks badly when it tries to live up to the epic elements. 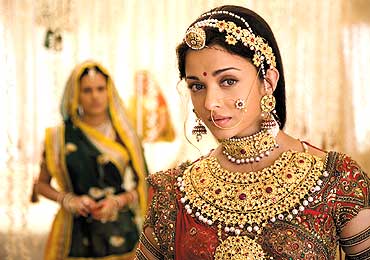 It takes a hell of a long while to hook into Jodhaa Akbar. The prolonged narration by Big B about how Jalaluddin (Hrithik) established his reign in the country—the wars, the strategies, alliances and peace treaties—all remain fairly remote. Then comes a scene where Jalal talks about respecting prisoners of war and not treating them like slaves and keeping religious differences aside to build a unified nation and things begin to fall in place.

You could dismiss it for distorting history but it’s only when the past is placed in a modern frame that Jodhaa Akbar really works. Instead of offering history neat, it takes ample liberties and it’s the resultant cocktail that’s heady. Like Akbar being referred to as gair mulki or the Outsider, which could well be today’s politicians taking on Sonia Gandhi’s Italian roots. The romance between Akbar and Jodhaa (Ash) is a decent, dignified celebration of pop secularism. A Muslim emperor marries a Hindu Rajput, agrees to her wish of not converting and of building a mandir in her chamber and you suddenly begin warming up to him and his respect for religion.

Gowariker builds the film on progressive, even if simplistic, politics that may not be palateable to all, but shows his own civility as a filmmaker.

Needless to say, Ash and Hrithik work rather well as a pair, there’s a togetherness even when they are at a distance from each other. And that strange chemistry when they are just walking together in a frame or when they are sword-fighting their differences. Gowariker also does his bit for the female gaze in that one rippling muscles shot of Hrithik being stealthily viewed by Ash. Quite delicious!

In fact, one wishes Gowariker had taken more liberties, played around with the form as well, reinvented the historical format more radically. The spectacle detracts. It’s when the film tries to live up to the epic elements that it sinks badly, be it the stilted dialogue, the inert lingo, Chitralekha-kind of big-ticket dances, or silly "taming of the elephant" scenes which would well have worked better in a Kriish. If Shakespeare can be experimented with in the West, why should historicals be sacrosanct?