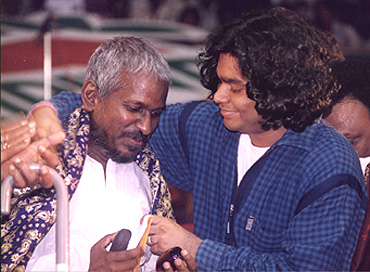 Comparisons are odious. But in south India—and in Chennai at least—you can’t duck the over 15-year-long debate on the comparative ‘genius’ of A.R. Rahman and his musical senior by twenty-three years, Ilaiyaraaja. Rahman’s double Oscar haul might have been a seamless moment of Indian triumph at Kodak Theatre, but in his native Chennai, it reopened the old debate. If Rahman is ‘Mozart’ to his followers, Ilaiyaraaja is ‘Bach’ to his.

The connection between the two goes back a long way. In the early 1970s, as Ilaiyaraaja was trying to find a toehold in Kollywood, working with hit music directors like M.S. Viswanathan, Salil Choudhury, G.K. Venkatesh and such, he was simultaneously trying to compose his own music. The instruments he hired for this were from another south Indian composer, R.K. Shekhar, who happened to be Rahman’s father.

Shekhar passed away shortly thereafter, but the family continued to hire out instruments. By the early 1980s, Ilaiyaraaja had become the stuff of legend, having already rewritten the...