Tourists discover the charms of hardship in far-flung villages 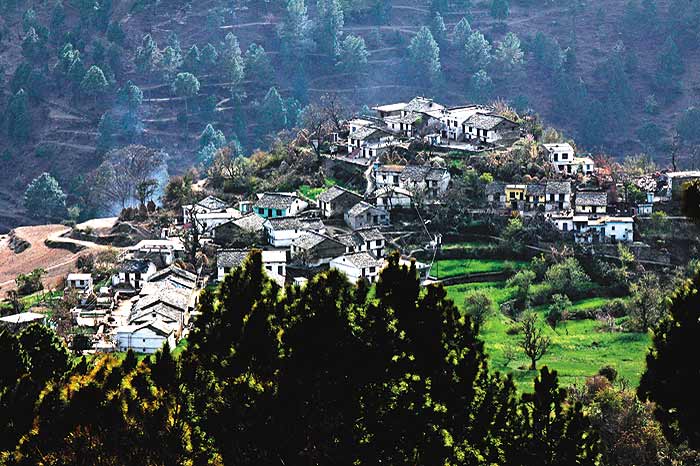 Jainoli, about 10 km from Ranikhet on the road to Kathgodam, is the mutton hub of the region, the finest place to pick up juicy lamb and goat meat. Bishan Singh Tanwal meets us here at the corner of the town temple and straightaway whisks us off on an hour-long trek down the steep, scenic slopes to his valley village, Kothiyan.

It’s a walk filled with breathtaking views and quaint anecdotes. He tells us about the old leopard hiding out in the mountains, about the tricky, slippery pine grass (or pirool) and about how his village came to be called Kothiyan. “An Englishman left behind his coat after bathing in the village river,” says Tanwal. This led to ‘Kotiyan’, which then morphed into Kothiyan.

The local lore, as always happens, is charmingly apocryphal and—well—very local. Beyond that, there’s nothing that would render Tanwal’s tiny farming village of 54 families as a big red dot on a map. And maybe it’s not exactly trending on Google. But for the past couple of years, guests have left the beaten path to come visiting, writers, academicians, students, techies—all in search of calm and quiet. They get plenty of both here. Mobile signals are sporadic and the nearest Internet access point is a long walk away in Ranikhet.

Away from it all A tourist uses his bins in Dhur

Tanwal, once a hotel receptionist in Ranikhet, is a farmer, proud of his 32 naalas—the local measure of land—on which grow wheat, spinach, masoor, mustard. He’s opened the doors of two of his rooms, which can house two to three tourists each. Five other families offer the same. Under the umbrella of the Ranikhet Eco-Tourism Cooperative Society, 15 rooms are up for grabs in Kothiyan for those who want a slice of rural hill life. For less than the radiocab fare from the airport to the city centre in most metros.

Karmi and Dhur are two other villages in Kumaon that are pretty much off the grid. Forget Wi-fi and mobile networks, electricity is available only from 4 pm to 8 am. What’s more, you only get there after a treacherous four-hour drive from Bageshwar, on which the jeep—car? you must be joking—can’t go beyond the first gear. In Karmi, a village of 6,000-odd, Gokul Singh Dev, a government contractor and social worker, has four rooms ready to welcome guests, as do farmer and shopkeeper Jagat Singh and Prakash Singh. In Dhur, which has about 25 families, Mahipal has three rooms for tourists.

But Kumaon is no outlier, rural tourism seems to be growing, slowly but surely, across India—from Nagaland to Ladakh, Madhya Pradesh and Karnataka (see box). Shiyong village in Nagaland gives you a glimpse of the day-to-day life of the Konyak tribe. Rumbak village is the most popular rural stay destination in Ladakh. In Orchha, Madhya Pradesh, tourists can stay in potters’ homes in villages around the ancient fort at extremely low prices.

They may be spread far and wide, but all rural stays are essentially about embracing the unspoilt, unheard-of and remote rather than succumbing to the stale pleasures of ‘developed’ tourist hotspots. “It’s all about experiencing simple pahadi life,” says Mahipal, of homestay in Kumaon. If you are looking for comfort and luxury, Kothiyan and Dhur are not your scene. No souped up, faux villages here, no synthetic replicas. It’s as real, rugged and tough as it can get. Spartan living. Roughing it. “We are not high-tech. Koi chaka-chaundh nahin hai (there’s no glamour here),” says Tanwal.

The food offered in Kumaon is local stuff—rotis made of local millet, pulses like bhatt & gahat. Bottled water is the only luxury.

So what’s the attraction? What isn’t, is the answer. Beyond defining it in the negative—as the ‘absence’ of urban hustle (which of course can be a good thing)—it’s possible to see it in positive, affirming ways. It offers a temporary submersion in another world, another way of life. Leaving the city and going pastoral for a while sounds like a cliche, but the actual experience of it is different. It comes with hardship and exhaustion—but also some real peace at the end of the trail. Materially, all the goodies of the alternative sort are there. “The environment is clean and pollution-free, the food is organic,” Gokul Singh says. And then there are the people, their stories, their songs, their rough and humdrum rhythms of life.

Do as the villagers do—it’s slow, prolonged, therapeutic. In Kothiyan, take an introspective walk to the river and the forest beyond, study the flora and fauna, go fishing using the village’s non-carbon fibre-enhanced kit, fetch pails of clear water from the stream, work on the fields, learn about organic farming, or lie back and listen to the harvest songs, the chanchri and hudkiya, floating in from the fields. In Karmi and Dhur, you can visit the Kali temple at Chauda Sthal, or entrance yourself, staring endlessly at the white Greater Himalayas. (Or use it as the base for a trek to Pindari glacier). 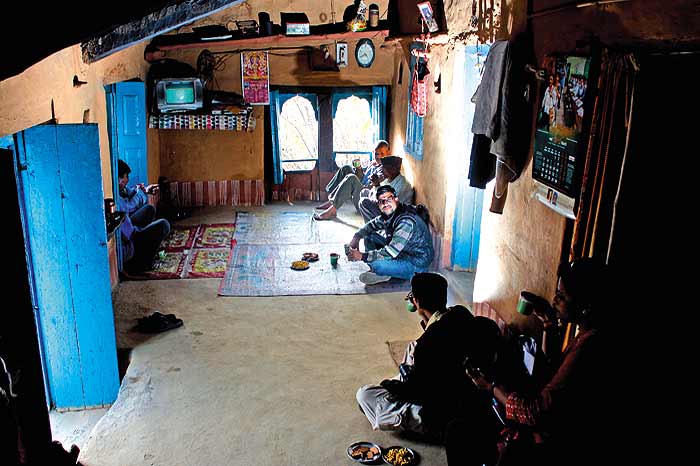 Rooms are offered in small traditional houses, most of them characterised by white, mud-plastered walls and small blue or brown wooden doors and windows. The ground floor (the goth) houses the cattle, humans occupy the first. All windows open onto the fields; for piped music you get the intermittent grunts and bellows of buffalos. There is no TV, fridge, bar or coffee-maker in the room, no AC (you don’t need it anyway), nor any laundry facility. Forget towels and toiletries, there is no en suite facility either. You share the toilets with the family. In Kothiyan, the only concessions made to urban finickiness are the mosquito nets on the windows and bottles of Kingfisher mineral water. “But our stream water is more pure,” Tanwal avers. The food is local—pulses like bhatt and gahat, kapa made of spinach, rotis made with local millet, madua, and jhangora pudding. You eat on the floor in the common room; this also houses a small, grimy Bush TV for community viewing. It’s here that we celebrate Sachin Tendulkar’s 100th 100.

Its distinctiveness apart, rural tourism comes with that added tag of altruism. The idea is not just to bring villages to the urban elite but, in turn, getting a reverse flow of benefits too. “It’s an additional source of income for us,” says Tanwal. It helps augment the rural economy. “I loved the feeling of having contributed,” says K. Sahasranaman, an engineer who stayed at a potters’ village in Orchha recently. It’s had other effects. Villagers are looking to improve their linguistic/communication skills. In catering to the sanitation needs of tourists, health and hygiene awareness is getting a boost. There are slogans all over the villages. ‘Shauchalaya ka karo prayog, Mite gandagi, bhaage rog’.

Small wonder, so many developmental organisations are pitching in. The Ranikhet and Bageshwar cooperatives are both supported by the Scottish government through its South Asia Development Programme in association with Yes Bank. (‘Village Ways’ is a similar initiative in Kumaon.) The model is self-management: villagers have their say. The institutional support is not for infrastructure-building; the grant helps build capacity and market. The villagers are helped to set up portals and websites. Their stall will be put up in The Great Indian Travel Bazaar, a travel fair, in Jaipur in mid-April. They will also feature in the Edge of India stall in the World Travel Market in London.

Tanwal, meanwhile, is dreaming big. He plans to hire a cab to take tourists to all the hotspots within an easy drive: the Golu Devta temple of Khaggyar, the Bhalu Dam, the apple orchards of Chaubatia, the Haidakhan temple, Binsar, Dunagiri, Kakucheena and Mandalkot. But that is still some months away. For now, top of his mind are clean sheets and spotless bathrooms.

Show Me The Fin