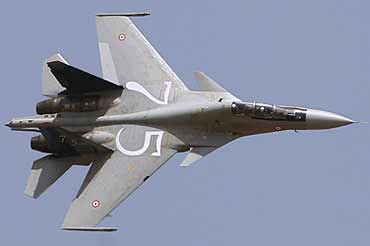 The defence ministry is gifting away Rs 900 crore in the Sukhoi deal to the Russians.

There's a generous 'gift' coming the Russian government's way from the Union ministry of defence (MoD)—worth a whopping Rs 900 crore. At least, that is the subtext being woven into the Rs 3,000-crore deal that India is all set to ink with the Russians for the procurement of 20 Sukhoi MKI combat aircraft in the first lot. As bureaucrats hurry through the paperwork to finalise the deal, an important clause in the much-touted Defence Procurement Procedure 2006 (DPP) is being conveniently given the go-by.

It relates to the condition that all defence procurements above Rs 300 crore must factor in at least 30 per cent of the contract amount as "offsets". That is, 30 per cent of any contract awarded to a foreign vendor must come back as business opportunities for Indian companies and suppliers in related fields. If this clause kicks in, Rs 900 crore of the Sukhoi deal should come to India. But the MoD, sources say, has chosen to be magnanimous towards the Russians—it has resorted to several "ingenious" ways to get around the offsets clause. It is another matter that the money will have to be shelled out of the defence budget.

Here's how the MoD justifies the Rs 900-crore loss it has inflicted on itself: While HAL maintains the Sukhoi deal is an "extension" of the old contract signed in 1997, the fact is the proposed new acquisition clearly violates the DPP norms put in place last year. Those who oppose the manner in which the deal is being manipulated say that it "makes a mockery" of the DPP and will encourage other deals being structured currently or in future to bypass norms announced by the government with much fanfare. Incidentally, the Sukhoi deal will be the first major one to be signed after the announcement of the new acquisition norms last August. And, the negotiations are actually for 40 Sukhois—the current deal constitutes only one half.

MoD sources told Outlook the issue of the offsets clause being ignored was much debated at the Defence Acquisition Council, the highest body within the ministry that clears big-ticket purchases. It was argued that the first contract for the SU-30 was signed in '97. The IAF then inducted a squadron at Rs 140 crore per plane. The latest negotiation was based on a market price of Rs 270 crore per aircraft. Since India has indigenised various components, the deal will cost us Rs 200 crore per jet. Thus, 20 aircraft would cost Rs 4,000 crore. The deal with the Russians is for only Rs 3,000 crore—the remainder is actually for ancillaries that will be negotiated separately with Israel and other sellers. 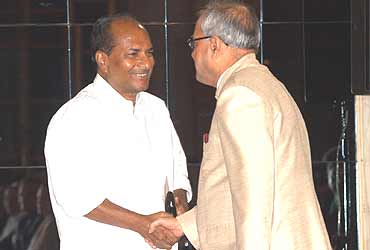 All this number-crunching is relevant: it's clear that while the MoD and HAL talk of honouring the old contract, the costs have gone up. Which is why there is one view in the MoD that "foregoing the 30 per cent makes little sense when the Russians are not making any concessions".

Why did the MoD opt to take the 30 per cent hit? Clearly, the Russians are capitalising on the fact that India needs the aircraft urgently. The IAF's desperation is thanks to the cumbersome acquisition processes that MoD bureaucrats have been following in the last decade. Despite repeated SOS calls from IAF that its fleet strength was depleting, the MoD procrastinated. The IAF was first kept on hold with the promise of the indigenous Light Combat Aircraft. But that's another five years away.

As a result the IAF's fleet strength has dipped alarmingly. This was put on record by MoS, defence, Pallam Raju, who recently admitted the IAF was down to 32 squadrons and would slip further to just 30 by this month-end. Air chief marshal S.P. Tyagi too is worried at his fleet strength shrinking to 28 squadrons by year-end—a fear he'd communicated to ex-defence minister Pranab Mukherjee.

While the IAF is understandably desperate to get back to the ideal of 45 operational squadrons, defence ministry sources say the Russians are equally under pressure to bag fresh orders for its Sukhois. "This fact could have been exploited to our advantage and we could have saved the Rs 900 crore," a defence ministry source familiar with the negotiations told Outlook. According to him, while India is the biggest buyer of the Sukhois, the Chinese air force is the other major buyer while Malaysia is still considering acquiring SU-30s from the Russians. The lack of a healthy order book, he says, could have been exploited by the Indians. "What is interesting is that the defence ministry completely ignored the DPP which could have been used to bolster the argument for the 30 per cent offsets clause," says the official.

Initially, the IAF, a principal player in the negotiations, chose to offer no comments to two detailed questionnaires sent by Outlook. Ditto the MoD. Finally, the IAF's official spokesperson, Wing Commander Mahesh Upasni, had only a few terse phrases to offer: "The details of the acquisition are still under deliberation." He said while air HQ has some "information", it has not "obtained" the "overall picture".

Defence minister A.K. Antony has a reputation of playing by the rule-book. But in the Sukhoi deal he seems to have lowered the guard at the cost of compromising on a procurement policy that is only eight months old. Some in the MoD would want him to strike a hard bargain. But is it already too late?

You See, You Saw