The ancient stones of Jerusalem have seen flux for 3,500 years, in tandem with shifting ties amongst Islam, Judaism and Christianity. Trump’s loud call is just another turn. 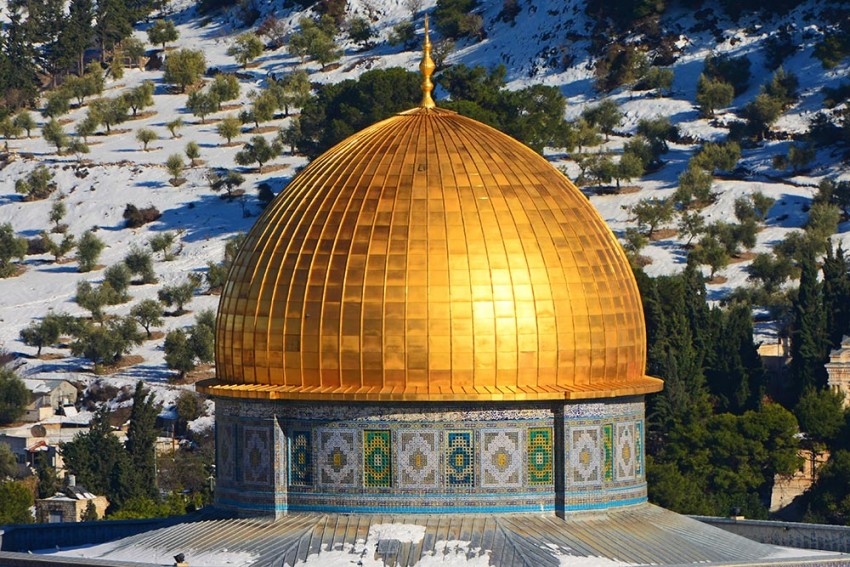 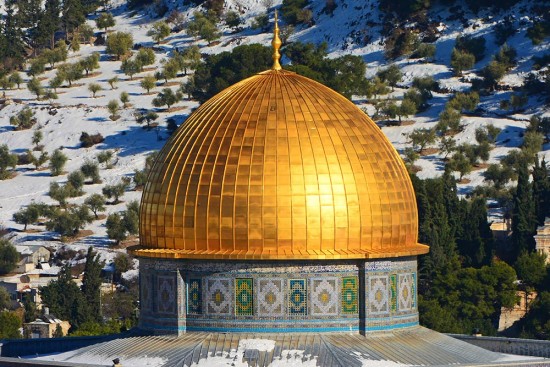 On December 6, President Donald Trump recognised Jerusalem as the capital of the Jewish state of Israel, reversing seventy years of US foreign policy. This was also a robust intervention in several centuries of West Asian history in which the three Abrahamic faiths have cohabited in this sacred geography and contested its ownership due to its central association with their faith, identity and heritage.

After having been with Egyptians, Jews, Babylonians, Persi­ans, Romans and Christians through 2,500 years, Jerusalem remained with Muslims over the last millennium, till 1917, when British forces took the city from the Ottomans. In 1948, armed forces of the new state of Israel ended its ‘international’ status by defeating the Arab armies and declaring west Jerusalem their capital. After the Arab debacle of 1967, Israel wrested East Jerusalem from Jordan, and united the city under its control.

But international rules have changed, and military occup­ation no longer guarantees legal acceptance: while 160 countries have diplomatic ties with Israel, not one of them recognises Jerusalem as its capital, even though its government functions from there, and the Israeli Knesset in 1980 des­cribed the city as the country’s “complete and united” capital.

Evangelical support for Israel is based on a messianic belief in the Antichrist and the ‘Second Coming’.

Trump, with his announcement, has placed himself among American leaders and religious movements that, from the later part of the 20th century, have displayed a remarkable sympathy for the Jewish people and solid support for their state. This itself has been a unique development in Christian-Jewish ties—marked by deep animosity for nearly two millennia.

Almost all early Christians were Jews, as was their prophet, Jesus, who proclaimed: “The spirit of the Lord is upon me”, but did not initiate a faith separate from that of his ancestors. This separate global faith took over three centuries to obtain final shape: the doctrinal separation was accompanied by portraying Jews as the enemies of Christians. In ca. AD 50, St Paul referred to the Jews as those who “killed the Lord Jesus and their own prophets, and have persecuted us”.

The emperor Constantine converted to Christianity in AD 312, marking the political triumph of the new faith over pagan Rome. But, he made more vituperative pronouncements against the Jews than the earlier pagan rulers. He also developed Jerusalem as a Christian religious centre, from which the ‘wicked Jews’ were excluded for ‘the bloody murder of the Lord’. Christian messianic belief from early times almost invariably portrayed the Jew as the Antichrist, one of whom would pretend to be a messiah, but would seek to promote Jewish interests at the expense of the Christian church.

The first major massacre of European Jews took place during the First Crusade when, in May and June 1096, several thousand Jews were killed by crusaders on their way to the holy land, thus setting up a tradition of Jewish pogroms that would endure over the next thousand years. In the medieval period, in Christian demonology, Jews were portrayed as devil worshippers, which gave them “limitless power for evil”.

Christian demonisation of Muslims went back to the early years of the faith, with consistent abuse of the Prophet and criticism of Muslims on doctrinal and political grounds. Pope Urban II initiated the crusades in 1095 to liberate Jerusalem from the Muslims with the words: “Oh what a disgrace if a race so despicable, degenerate, and enslaved by demons should thus overcome a people endowed with faith in Almighty God and resplendent in the name of Christ!” Over the next four centuries, as Tomaz Mastnak has noted, while Europe was shaped as the “homeland, fatherland and native soil” of Christians, the continent’s int­ellectuals and political and religious leaders demanded: “exterminate the Turks in Eur­ope”, so that a ‘permanent crusade’ was kept in place. Jews and Muslims were together viewed as “inhuman monsters”.

After the French Revolution, though the role of the divine in mes­sianic belief was replaced by a secular ideal, the Jew continued to be demonised. In a Germany traumatised after the First World War, popular xenophobia drew on a 2,000-year history to see the Jew with “an inherent will to evil”. As early as 1919, Hitler wrote: “Mere pogroms are inadequate to cope with such a dangerous foe...its [the German government of righteous nat­ionalist leaders] ultimate aim must be the removal of the Jews altogether.” The “final solution” of the Nazis emerged from this fervent conviction. However, through the Second World War, anti-Semitic feelings were ramp­ant among Allied powers as well: shiploads of Jewish refugees from Nazi Germany were turned away from American shores to meet a grisly end in concentration camps.

The aftermath of the Second World War effected some significant changes in centuries-old western attitudes: due to the shock and guilt generated by the holocaust, the ‘exodus’ to the holy land of Jewish migrants, and the declaration of the state of Israel in 1948, the Jew going to Palestine was dep­icted in popular literature and cinema as a hero and an intrepid adventurer. In contrast, the Arab continued to be seen in negative terms as sadistic, treacherous, slave trader, camel driver, money changer and scoundrel.

The positive perception of the Jew culminated in the dev­elopment of the concept of ‘Judeo-Christian civilisation’ which ended the centuries’ old animosity and now came to be accepted as the core western identity. President-elect Dwight Eisenhower was the first US leader to publicly refer to this concept, calling it the “deeply religious faith (on which) our sense of government is founded”.

The US, given the deep-seated religiosity of its people, is the most fervent advocate of this new concept, with evangelical Christians in the vanguard. Evangelical Christians in the US, numbering about 80 million, are the strongest supporters of conservative politics in their country and most of them are allies of Israel, particularly its hardline religious groups. Their hardliners have muted the influence of the more moderate among them who favour reconciliation between the Israelis and the Palestinians and the sharing of Jerusalem between them.

The evangelical support for Isr­ael is based on their messia­nic belief that, once the Jewish state is set up in the ‘Promised Land’, and the Temple, destroyed by the Romans in AD 70 is rebuilt, the Antichrist will emerge to destroy the Temple, commencing the seven-­year period of Tribulation. This will usher in the ‘Second Coming’ of Jesus Christ, who will fight the Antichrist. In this conflict, all Jews will either become Christians or perish violently, after which Christ will rule for a thousand years. 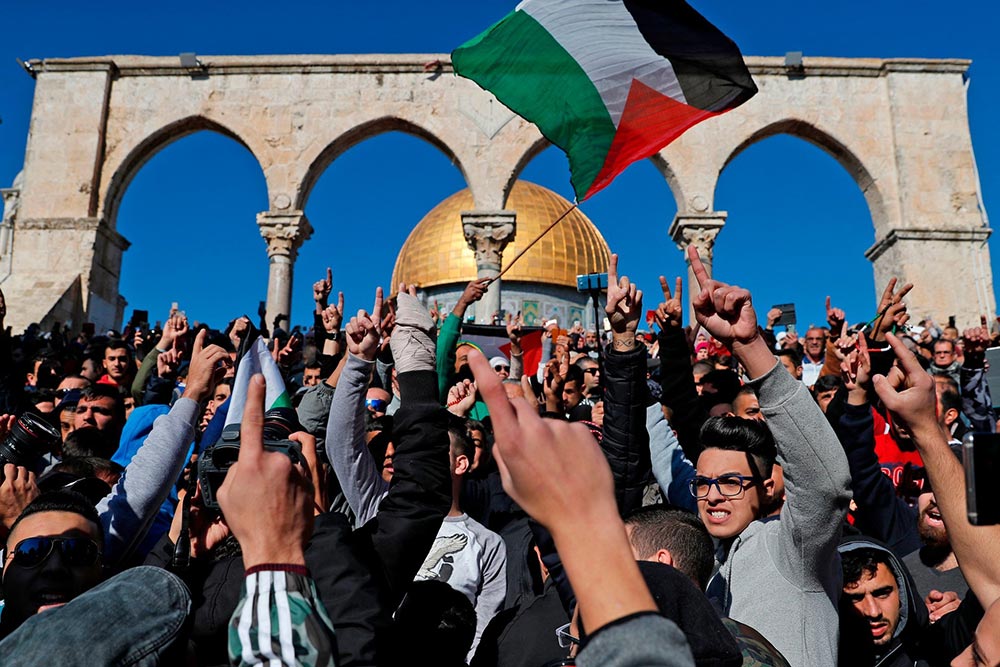 Christian Right protagonists often depict Muslims as the Antichrist. The writer Hal Lindsey has said: “[Islam] seeks not only to destroy the state of Israel but also the overthrow of Judeo-Christian culture—the very foundation of our western civilisation.”

The Christian and Jewish right-wing movements are now closely affiliated, the latter being represented in the US by the pro-Israel lobbies and the neocon movement. This has ensured full backing for the Israeli right-wing Likud Party’s maximalist agenda, including expansion of settlements in occupied territories, opposition to the two-state solution and Israel’s sovereignty over Jerusalem.

This affiliation is clearly opportunistic, with both sides foc­using on immediate political advantage rather than on the inherent contradiction at the heart of their beliefs: Christian redemption in End-times clearly lies in the destruction of the Jewish people! Jewish groups would retain influence in the White House and the US political establishment rather than dispute this arcane belief.

Trump enjoyed the backing of the evangelicals during the presidential campaign: eighty per cent of White evangelicals voted for him in the November election. They have been inf­luenced by the backing extended to him by prominent clergymen from the Right and the expectation that his conservative nominees to the supreme court will ensure conservative decisions over the next several years.

Trump remains sensitive to the agenda of the religious Right: he has proclaimed that his administration is “stopping cold the attacks on Judeo-Christian values”. It is this position that has led him to accept Jerusalem as Israel’s capital. Paula White, an evangelical pastor who is close to Trump, has said: “Once again, President Trump has shown the world what I have always known—he is a leader who is willing to do what is right.... Evangelicals are ecstatic.”

Polls suggest the new policy does not have popular backing. A Brookings Institution survey found that only 31 per cent of Americans support moving the US embassy to Jerusalem. A large majority of American Jews, who are generally liberal, also oppose it. But, support for the initi­at­ive has come from some pro­min­ent conservative Jews, notably She­ldon Adelson, one of the most important donors to the Trump campaign, and the evangelicals who actively lobbied the White House.

Commentators note how Trump has built a ‘cult-like’ leadership among followers, parti­cularly evangelicals. During the campaign, a sup­­­­porter had compared him fav­o­u­rably to Abraham, Moses and David. A pastor asserted Trump receives div­ine revelations, while Paula White said Trump was promoting God’s plan for America.

Trump’s initiative on Jerusalem, with its mix of religious fervour and political calculation, is a blip in the 3,500-year narrative of the city: over two millennia, Jews in exile had viewed the city as the source of their salvation and reconciliation with God. Similarly, for dispossessed Palestinians, it has become central to their identity. Karen Armstrong says prophetically: “One thing that the history of Jerusalem teaches us is that nothing is irreversible.”