Great quick reference handbook, with interesting nuggets, but nothing that is new 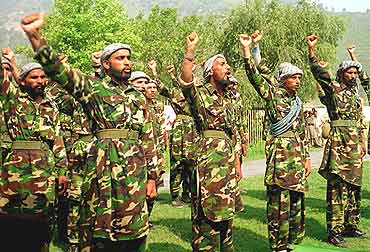 Besides the United States' war on terror, the post-9/11 world has witnessed another phenomenon: a new interest in books on Islamic terrorism. The hottest-selling are those that offer a glimpse into the smoking caverns of a jehadi Hades, the flickering fires barely outlining a handful of recognisable villains who turn out to be the board of directors of Terror Inc, exporting attacks from Indonesia to Indiana. While Osama bin Laden, the shaitan himself, has been the subject of much of this genre, Al Qaeda has also been extensively profiled in several books like Rohan Gunaratna's Inside Al Qaeda and Peter Bergen's Holy War, Inc.: Inside The Secret World of Osama bin Laden.

Amir Mir, however, offers a peep through a different keyhole to an audience fixated on another hell. For Indians, as Mir himself notes, Osama resonates far less strongly than say Dawood Ibrahim, and the Jaish-e-Mohammad or Lashkar-e-Toiba evoke more immediate concerns than Al Qaeda. It makes good marketing sense, therefore, to update and publish in English the handbook on jehadis that Amir had published...