Wonder if we would have missed much had this inconsequential flick not been released here at all. 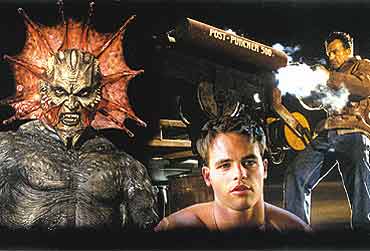 With a hideous title like Jeepers Creepers (Part 2), a film can hardly inspire you to go dashing to an expensive multiplex. On second thoughts, the film does live up to its name, it's a suitably clunky monster movie. The plot is predictable, the characters are not fleshed out. Thereby there's no call for great histrionics nor any need for star faces. In fact, it's hard to spot even one recognisable name in the crowded cast. No wonder, the star of the show by default is the Creeper, a scarecrow of a monster who rises from the cornfields every 23rd spring for 23 days to feast on the humans.

The action starts in a remote farm where a scarecrow mutates into a monster and flies away with a child in its clutches. Next day is the 23rd day, the last day of the Creeper's feeding season. Now we zoom in on a university bus full of basketball studs and cheerleading babes returning after a great championship game. As the bus gets a flat and is stalled in the middle of the lonely highway, the monster makes a beeline for its occupants, one by one. First the team coaches, then the driver and then the students themselves. The entire action is nothing but one encounter after another with the bus offering no protection against the sharp talons of the Creeper. He sniffs out those he craves, leaving the kids wondering whether they should stay together or abandon those marked for death.

However, the confrontations are not depicted cannily enough to sustain the viewer interest or to build any overwhelming sense of fear. Worse, they just stretch on and on. Horror gets mitigated because it's made so obvious, there's nothing even remotely unspoken about it. Maybe I am a predictably cynical critic because as the cliche goes, I hardly felt my heart pounding, nor felt my pulse racing. And that's the basic problem with Jeepers Creepers 2: it's a horror film that doesn't scare you enough, it doesn't leave you with any spooky nightmares. Also, unlike the recent slasher films, there's not enough gore to grimace about either. Jeepers Creepers 2 is just plain silly. And comes to India a year too late. Wonder if we would have missed much had this inconsequential flick not been released here at all.