Jam On The Freeway 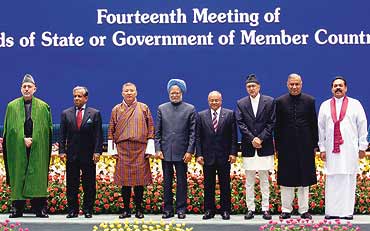 Decisions taken at the 14th summit

"I dream of a day when, while retaining our respective national identities, one can have breakfast in Amritsar, lunch in Lahore and dinner in Kabul. That is how my forefathers lived. That is how I want our grandchildren to live." Wishful thinking? Well, that's how Prime Minister Manmohan Singh portrayed his vision of life in South Asia at the FICCI annual general meeting on January 8. Three months later, at the conclusion of the 14th SAARC summit in Delhi this week, when leaders of eight countries gathered to take stock of the regional grouping, it is perhaps appropriate to ask the question: is there hope of South Asia integrating in the manner the Indian PM had grandiosely envisioned?

His January vision was articulated in absolute terms, glossing over the lack of integration, the political barriers, the socio-economic obstacles; it was spelling out an idyll for the average South Asian. Yet, in his closing remarks at the Delhi summit, Manmohan sounded upbeat: "The quality of discussions gives me the confidence that we can soon bring the fruits of SAARC to our people."

He listed the achievements: the summit had agreed to operationalise the SAARC Development Fund (SDF), establish a South Asian university, create a SAARC food bank, set up the SAARC arbitration council. And shortly thereafter, Union foreign minister Pranab Mukherjee gushed before the press, "In terms of atmosphere, this was the smoothest, least contentious summit ever." Consider his remark as a substantial achievement, given the quality of discussions in most SAARC meetings. Surprised?

A diplomat from a neighbouring country thought the smooth conduct of the summit was perhaps solely due to the presence, for the first time, of observers from outside the region—China, Japan, South Korea, the European Union, the United States—who were allowed to attend the inaugural and the closing sessions: "We have to be good boys in front of the big boys," the diplomat declared.

Even the presence of outsiders, clearly a bracing signal of SAARC proceedings becoming more focused in the future, did not prevent the closed-door sessions from becoming mired in customary squabbles. One of the delegates from a smaller SAARC country said, "It was quite baffling to see the intransigence of the Bangladeshis and Pakistanis when the discussions moved to SDF." The delegates from these two countries kept insisting that outside, non-regional donors to the SDF should have a say in the decision-making and enjoy voting rights to determine the utilisation of the funds. This proposal was designed to counter India's influence by effectively giving weightage to bodies or countries who are not SAARC members. Finally, however, with India holding firm over two days of protracted negotiations and mustering support from other member states, the decision was taken to abide by the SAARC charter, which provides that all decisions ought to be taken through consensus among members.

Similarly, the Indian efforts to nudge the organisation into developing a mutual legal assistance treaty (in reference to terrorist acts) were met with stiff resistance from Pakistanis who were insistent on first discussing the issue within a bilateral framework. Fearing the possibility of clauses asking for extradition of terrorists, even the Bangladeshis baulked at the idea, say sources. Now Sri Lanka is scheduled to host a meeting for exploring the issue further, in what can be described as a truly SAARC style of keeping aside contentious issues.

New Delhi's aim of conducting a smooth summit can also be evinced from the way the SAARC declaration winks at Pakistan's unwillingness to operationalise SAFTA (South Asian Free Trade Area) with regard to India, emphasising—albeit gently—that SAFTA "should be implemented in letter and spirit". Said a source: "India is not about to come down heavily on Pakistan for non-compliance." In Islamabad's view, New Delhi must first, among other things, reduce a number of non-tariff barriers, ease customs procedures and introduce trade facilitation measures before Pakistan can begin moving in the direction of according full SAFTA benefits to India; benefits already extended to other SAARC members. This will be slow in coming, as will other aspects under discussion.

For instance, following the 12th SAARC summit in Islamabad three years ago (yes, one delightful aspect of SAARC is that summits need not happen every year) it was decided to undertake a SAARC Regional Multi-Modal Transport Study to improve connectivity and establish an integrated transport infrastructure. (Some of the road corridors have been provided alongside.) Now, the study has been extended to Afghanistan, which formally joined the SAARC this week. But it is moot whether Pakistan would provide India land access to Afghanistan, or Bangladesh would facilitate connectivity to the landlocked Northeast region. For academic purposes, though, the study has identified 10 regional road corridors, five regional rail corridors, two regional inland waterways corridors, 10 maritime gateways and 16 aviation gateways. Some have even been prioritised. Which ones remain a mystery.

The grand theme of the Delhi summit was connectivity and promotion of linkages in all its manifestations—physical, economic, telecommunication, energy and people-to-people contact. But what the summit eventually provided in concrete terms was a visa exemption scheme for 50 journalists from each SAARC country. After 20 years of SAARC, many would still argue this is a great start. But, sources say, it is more of the same. Six months ago, a meeting of SAARC immigration officials recommended that the scheme should initially cover up to 100 journalists. Clearly, SAARC leaders who sing paeans to connectivity on television play quite another tune in meetings.

Therefore, dear reader, there is no glimmer of hope for the vast majority of us—at least for the moment—to partake of the culinary journey that Manmohan had so tantalisingly described. For the moment, you can eat the 'fruits' of SAARC only where you can.