Jallianwalla: The Empire As Abattoir

Racist, man misguided or fool? The architect of that April massacre didn't know himself. 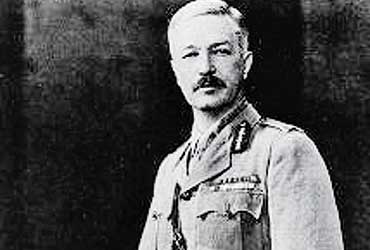 The Butcher Of Amritsar: General Reginald Dyer
By Nigel Collett
RUPA Pages: 575; Price: £25
Believe it or not, the real saga of the Dyer family began about 200 ft below the bungalow in which I spend my summer months. They trace their connection with India to the 1820s, with the East India Company. Reginald’s father Edward came to India sometime around 1850 and stayed with his elder brother John who was a practising barrister in Mussoorie. He wanted to find out what he could do to make a living, John advised him to set up a brewery as there was a great demand for beer among the British, and English beer coming via the Cape of Good Hope was expensive. Edward returned to England for two years to learn the art of making beer and brought the latest machinery when he returned. He bought over a dilapidated brewery in Kasauli, renovated it and started making beer. It was an instant success. He expanded his operations and set up a larger brewery in Solan, about 20 miles uphill on the Kasauli-Simla Road, then took over the management of the Meakins brewery in Murree (where Reginald was born in October 1864), and opened yet another one in Lucknow. The family lived in Kasauli for a few years before moving to Simla, which had become the summer capital of the Central and the Punjab governments as well as the headquarters of the British Indian army. In Simla, where all the action was, Edward Dyer bought a large house and an estate, and a house from which the Punjab plains were visible. Dyers’ was the richest English family in town. By then, Dyer-Meakin beer had flooded the Indian market.

Reginald was the sixth of Edward and Mary Dyer’s nine children. From their ayahs and servants they learnt to speak Hindustani. The boys went to Bishop Cotton School. Reginald was there for six years before he and his brother were sent off to a non-district school in Ireland. They did not see their parents for 12 years. Reginald was an average student, good at mathematics and doing things with his hands. He was also a good boxer. At 19, he got admission to Sandhurst and then joined the British Indian army. He saw action in Burma before he was posted to Jhansi. There, much against the wishes of his parents, he married Annie Oomanny, the daughter of the commanding officer. She bore him a daughter and two sons. It was a close-knit happy family. 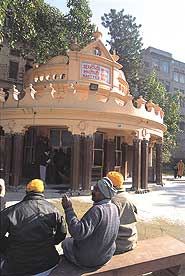 Reginald saw more action in World War I, extending from Hong Kong in the Far East to the nwfp and East Persia. He won acclaim as a fearless officer who led his men from the front. What made Reginald Dyer the butcher he turned out to be? We can only guess. There was the rigid caste structure of British Indian society. Despite their wealth, the Dyers were looked down upon as parvenus by Britishers in the army and the civil services: they were boxwallahs and not pucca. Reginald inherited that chip on his shoulder. As a schoolboy, he stuttered badly and was mimicked mercilessly for it by his schoolmates. He also shared the prejudices of Whites against coloured races. In Burma, for every White soldier killed by a sniper, they destroyed his entire village, killing everyone, including women and children. Coloured races were to him, as Kipling put it, "lesser breeds without the law". They deserved to be treated as naughty children and pinched on their bare bottoms if they behaved badly. It was with this kind of mindset that Colonel Reginald Dyer found himself posted in Jalandhar as Brigadier-General, with Amritsar in his military jurisdiction, when political agitation rose to a fever-pitch in the first few days of April 1919.

On April 10, Dr Saifuddin Kitchleu and Dr Satyapal were arrested and deported to Dharamsala. The city went up in flames. Railway yards, banks and post offices were looted and burnt, English managers of banks lynched, an English nurse badly roughed up. Civil authorities and the police were unable to restore law and order. Without so much as a by your leave, Reginald Dyer came over from Jalandhar and put the city under military rule.All processions and meetings were banned. When he heard that a large crowd upwards of 20,000 people had assembled at Jallianwala Bagh—a seven-acre plot enclosed on all sides by high walls with only one narrow entrance—he marched his troops to the site. Then, without warning the assemblage to disperse, he ordered his men to open fire. The firing continued for 15 minutes, killing between 350 and 500 men, women and children. By then it was evening and a curfew had been imposed on the city. He left the dead with the dying and the grievously wounded where they were lying and drove back to his office-cum-bungalow in Rambagh. In those 15 minutes he had wiped out all the goodwill the British had earned in modernising India, ushering in telegraph lines, telephones, railway tracks, roads, law and order and introduction of democratic institutions.

Did Reginald Dyer have any sense of guilt for what he had done? Quite clearly not. He had men flogged in public, crawl on their bellies in the lane where the English nurse had been assaulted. He was convinced he had saved the Punjab and India for the British Empire. In this, he also had the backing of the Lieutenant-Governor of the Punjab, Sir Michael O’Dwyer (later assassinated in London by Udham Singh).

He successfully exploited the Sikhs by bestowing favours on them and keeping them aloof from the the Hindus and Muslims. He visited the Golden Temple and was given a saropa by the Sarbrah, Aroor Singh, in the presence of Sundar Singh Majitha. He was offered conversion to Sikhism without having to grow his hair and beard or quit smoking. He politely declined the offer. Both men had knighthood conferred on them.

Realisation of the enormity of the crime he had committed came only when the forming of the Indian National Conference Committee of Enquiry was followed by the British setting up an enquiry commission of their own under Lord Hunter. It had three Indian members and Reginald Dyer was put through a gruelling cross-examination which lasted the whole day, leaving him exhausted and in low spirits. Worse was to follow in the debates in both houses of the British Parliament. Among his severest critics was Winston Churchill, then a Liberal Party cabinet minister in Lloyd George’s government. He described Dyer’s action as "an extraordinary event, a monstrous event, an event which stands in sinister isolation". A shocked Dyer and his tearful wife left the House in a state of deep depression.

Reginald Dyer had supporters both in India and in England. The English Morning Post opened a fund for him. So did British-owned papers in India: The Statesman, The Pioneer and The Civil and Military Gazette, Rangoon Times and The Madras Mail. Contributions poured in, till the total was close to £30,000. In addition, he was even presented a Sword of Honour for saving India for the British Empire. Remorse, if any, came to him after he suffered a stroke. He survived it to live another five years, pushed around in a wheelchair, keeping awake all day and night, reading. Before his end came on Saturday, July 23, 1925, he told his daughter-in-law, "I don’t want to get better. So many people who knew the conditions of Amritsar say I did right...but so many say I did wrong. I only want to die and know from my Maker whether I did right or wrong."

Nigel Collett has been very thorough in his research on Dyer’s life and completely objective in his judgement on the man. He has, however, been unduly long-winded about the man’s earlier life which takes up half of his voluminous biography and makes for some tedious reading. It is only the second half of the book which deals with what he did in Amritsar and for which he will go down in history books as an arch-villain.