Well, it’s not for nothing that many call us the U-turn Prone Alliance (UPA) 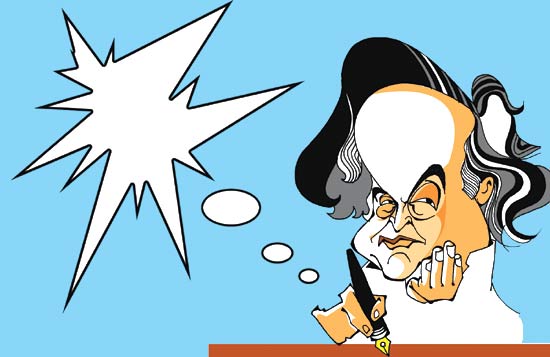 First, let me get this off my chest. I know the nation wants to know the real reason why I wrote that famous (or should I say infamous) letter to the PM detailing the need for India to dilute its position on climate change and emission controls. Well, as is the wont with me, the most unusual things happen while I take my late evening walks in Delhi’s Lodhi Gardens. This time I was accosted by a stunningly beautiful American woman (the last was when Pranab Mukherjee waylaid me ahead of the budget). “Mr Rumeesh, I am from Goldman Sucks and I just had to meet you. It’s very important. This could be your ‘Di-vali’ gift to India,” she almost whispered, reminding me of those made-for-TV films in which dainty women consult Holmes about a blackmail or murder.

Well, what was this ‘Di-vali’ gift? We went behind the cover of the bushes and I tied my hair into a ponytail to disguise myself. Then Ms Goldman launched off: “Mr Rumeesh, at Goldman we have started a network of companies manufacturing vests from hand-spun, hand-woven khadi. By this, we hope to make millions by saving energy and earning carbon credits. India too can rake in the dollars by tying up with us and opening similar khadi units.” She then went on to elaborate on how even ordinary Hindustanis can earn carbon credits by making simple sacrifices. Apparently, under the proposed Goldman Sucks scheme, if one quits smoking one can claim credit for it. If a farmer sells all his cattle, then he gets a certificate from Goldman which can be traded on the Chicago Climate Exchange. And if a BPL family eats one meal a day and refrains from watching TV and using the swimming pool and other club facilities, then it gets credits too. “Per capita income will go up. Why President Obama estimates that $646 billion worth of carbon credits will be auctioned in the next seven years. India should not miss out on this.” According to her, what’s the best part of the scheme is that the rich can buy credits and continue to pollute the atmosphere running seven ACs, six cars and giant, noisy diesel generators. So the upper middle class will have precious little to complain about....

Anyway, having said her piece, Ms Goldman slipped me an envelope. “This is a seven-page paper you will send to the prime minister,” she said, looking deep and mesmerising into my eyes. Well, I said goodbye, rushed home, read the note, made some corrections (Manmohan Singh was spelt Munmorgan Sing) and dashed off the paper to the PM. The rest, as they often say nowadays, is history.

But then, you may ask, why did I later deny everything in the note? Well, it’s not for nothing that many call us the U-turn Prone Alliance (UPA). And, yes, if Kapil Sibal and the PM can eat their words, why can’t Jairam Rumeesh (oops Ramesh!)