His bout of coyness may (not) last. But the law is one antidote to Togadia Updates 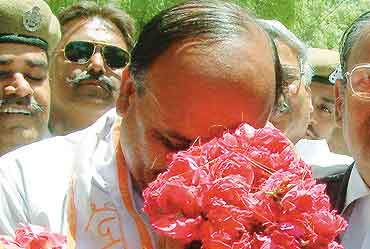 outlookindia.com
-0001-11-30T00:00:00+0553
Has the Congress finally found a magic wand to contain the rampaging forces of Hindutva? If certain strongarm (and legitimate) measures taken in the two Congress-ruled states—Rajasthan and Madhya Pradesh—are any indication, the answer is yes. Top Congress leaders say that a "fight fire with fire" approach to nip this "extremism" in the bud lies at the core of this strategy. What's more, they say, it's producing tangible results.

The success of this tough line was proved—albeit provisionally—when VHP firebrand Praveen Togadia came out on bail from Ajmer central jail in Rajasthan on April 22. Gone was the vim and venom, as he walked out amidst a small crowd comprising state BJP chief Vasundhararaje, VHP leader Acharya Giriraj Kishore and others who came late on the scene. Overtly defensive, and pensive, a subdued Togadia maintained that the campaign to distribute trishuls would continue; but he appealed to the Rajasthan government to 'redefine' the trishul so that a new design could be made. He appeared fairly chastened. "Our fight is not against the Congress," he said. "It is a fight for religious rights. We want a saffron Congress and a saffron BJP." But before his arrest two weeks ago, his line had been markedly different: "Either there will be trishuls or jehad in Rajasthan."

Earlier, after being arrested under the Arms Act, when Togadia approached the court for bail, he learnt the prosecution had slapped an additional case of sedition on him. He was refused bail and remanded to nine days' custody. Later, the sessions court, while releasing him on conditional bail, stated that he should refrain from committing the offences (for which he was booked) and the prosecution would take "appropriate action" against him if and when he was found indulging in similar activities. He was asked to personally appear for every hearing.

If the VHP had expected a "Hindu uprising" after Togadia's arrest, there was not even a whimper, either on the desolate streets of Ajmer, or in Delhi, or in any other part of the country. Hindus were not called upon to shed their blood; there were no war cries saying there was no jail strong enough to hold the VHP leader.

Surprisingly, even in Rajasthan, where the "trishul diksha" campaign had been intensified in the recent past, there were few to take up Togadia's cause. After his arrest, for two days no one from the VHP came to their leader's rescue. Nor did the local BJP leaders, including Vasundhararaje, meet him in solidarity or sympathy. "The arrest caught us by surprise," admits veteran BJP MP Rasa Singh Rawat from Rajasthan. The only ones who finally arrived were Togadia loyalists from Gujarat—his VHP and Bajrang Dal compatriots—and BJP MLA Haresh Bhatt from Godhra. And Gujarat alone is where Togadia has found his voice back.

Campaigning in MP's Indore district last week, chief minister Digvijay Singh could well have been gushing on how to tame wild horses in an election year. Referring to Rajasthan CM Ashok Gehlot, Digvijay said, "Hum Togadia ke naak mein nakel daalna chahte the, par yeh shrey inhone ley liya (We wanted to rein in Togadia, but he took the credit for this)." Not quite finished, he added, "Par hamne Dharmender ke nak me nakel daal di (but we tamed Dharmendra)." Henceforth, Digvijay says, both the Hindutva icons will learn to talk sense.

Acharya Dharmendra Dev, another VHP strongman, was delivering a vitriolic speech at Dewas on March 16, demanding among other things, an Ayodhya-like excavation in Mecca. The speech was delivered against the backdrop of threats issued by the state government that strict action would be taken against those inciting communal violence. The acharya was picked up by the MP police from the Ujjain railway station as he was about to leave for Jaipur.

After a night-long 'stay' at the government circuit house, Dharmendra was shifted to the central jail on court orders. He declined bail, with the VHP demanding that not only should he be released unconditionally but the MP government should also apologise for the inconvenience caused to him. He was remanded to police custody till March 28. The VHP then organised a bandh in Dewas and Bhopal against the arrest but it turned out to be a flop show. Digvijay said, "Either he applies for bail or stays where he is." Soon enough, his lawyer filed a bail application. After spending 11 days in jail, Dharmendra left quietly, without a sound or whimper.

Two days later, Togadia was in Bhopal saying that the VHP would launch a "vigorous agitation" against Digvijay's anti-Hindu government. A key component of this agitation included flooding the villages with audio tapes of Acharya Dharmendra's sectarian speeches. All it took was one night's work to undo the plan. Some key members of the VHP were picked up, their cassettes seized, and the agitation was punctured before it could even take off. Since the last one month, Dharmendra has not set foot on MP soil.

The VHP is aghast. "We will throw out Gehlot and Digvijay," threatened Acharya Giriraj Kishore. Warned BJP president Venkaiah Naidu: "The Congress will have to face the wrath of the Hindus," adding that Congress governments were not willing to invoke pota against those with AK-47s, but were willing to ban a harmless Hindu symbol like the trident.

Counters Congress's Jaipal Reddy: "We cannot allow anyone to become a non-stop propagator of communal hatred. We fully endorse steps taken by the Rajasthan and MP chief ministers." Concurs Nilotpal Basu of the CPI(M): "A danda is what is needed for these rabble-rousers. I only hope the Congress can keep up this campaign and pursue it to a logical end."

Clearly, the Congress is on the offensive. Chhattisgarh chief minister Ajit Jogi has warned the VHP against its trident distribution programme in the state. Last week, the Rajasthan government banned rss drills on any government land. "We are asking officials to ensure that the rss is not allowed to hold its shakhas in the premises of government schools and other public places," Rajasthan home minister Gulab Singh Shekhavat said.

The big challenge before the Congress, its leaders say, would be how to prevent a backlash. But if the mood within the Congress-ruled states—particularly those going to the polls—is anything to go by, the steamrolling Hindutva juggernaut may have finally found its biggest roadblock. Especially in Rajasthan and Madhya Pradesh where the Sangh parivar so desperately wants to repeat the "successful Gujarat experiment".

Too Convenient By Far