Jacques Of All Trades 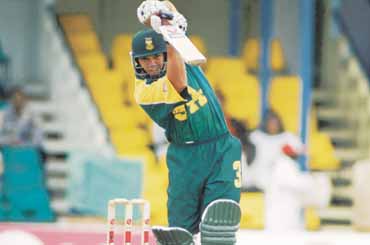 outlookindia.com
-0001-11-30T00:00:00+0553
All-rounders are actually artillery men in cricketing garb. They believe in steamrolling the opposition. Just running over them after cutting out all the escape flanks. If nothing works they will shoot point blank.

No cricketer better exhibits such qualities than Jacques Kallis. Which is why he is South Africa’s trumpcard in the World Cup being hosted there this year.

Kallis is not just another all-rounder, he also belongs to that increasingly vanishing type of cricketer called the match-winner. He is just the fella any captain would like to have in the gang. He is just the man who, after a flick of the captain’s finger summoning him from the deep, will nonchalantly take the ball and deliver the crucial wicket when the other team has 10 overs to play and only 50 runs to get.

The blondish hair gives him that aura of a ruthless bloke who will stop at nothing to achieve his aims. That is what Kallis normally does. He can score 50 in 24 balls, he can hit 100 in 113 ball with five fours and five sixes. Sometimes, if he is in the mood, he can also take five wickets in just 12 balls.

The 27-year-old Kallis is a pretty efficient bowler. He cuts the ball off the seam and can swing it as well and runs in with the right speed of a medium-pacer, never trying to overstretch himself and in the process getting hit.

Like pace bowlers, all-rounders too like to hunt in pairs. Along with Lance Klusener, Kallis has wrecked many an opposition. Klusener has been a bit out of form of late, but when they bowl in tandem, Kallis with his smooth flowing action and Klusener with his leaping delivery stride always look on the verge of beginning a demolition spree. If Kallis and Klusener are together at the crease with 10 overs to go and around a hundred to get, the captain, Shaun Pollock, sitting in the dressing room will not have to chew off many fingernails.

Among finishers in the game Kallis is not in the league of a say, Michael Bevan, but there is a murmur of approval when he walks out to bat with a clear target to get. Like all good finishers he can innovate as well. There are no strokes he will not play. He uses timing as well as brute force. His strong shoulders which make him a lethal medium-pacer come in handy here as well as when he thwacks the ball to the leg side.

He is a finisher who started out quite disastrously getting only 57 runs in his first five Tests at an average just managing to cross eight in a home series against England. As late as 2000, five years after his debut, South African cricket experts were saying that Kallis has to step up his level of play if he had to become the "finished article." Three years later, he has definitely reached that assigned spot. As a well-rounded personality and an all-rounder of great calibre.

It is difficult to categorise him as a bowling all-rounder or a batting all-rounder. He is both. To his credit Kallis has not ignored the craft of batsmanship, the trap into which many all-rounders fall. He does not depend on the occasional swashbuckling innings to prop up his batting stats, like many all-rounders are tempted to do.

In the first Test against Pakistan in December, he came to the crease when South Africa were 33 for two and by the end of the day he had reached 104 when bad light stopped play. It was an innings which the best of the middle-order batsmen would have been proud to play. He showed timing and caution, hitting every ball to the ground as a safety measure, an innings far away from the one-day pyrotechnic he displays.

With eight centuries and 5,902 runs at an average of 44.04 in 162 innings, he will be a force to reckon with for all sides in the World Cup. He was the fastest to cross the 4,000-run mark getting it in his 118th odi. It only goes to show that Kallis can traverse the entire spectrum of batsmanship.

To add to all this, Kallis is a great fielder both close-in and when patrolling the boundary. It makes sense to place him in the deep as well, for his throw-ins will come in like a wicket-seeking missile.

When he took the wicket of Manjural Islam last year, Kallis became the fastest man in odis to reach the 5,000 runs and 150-wicket mark. He thus joined the illustrious company of Sanath Jayasuriya, Carl Hooper and Steve Waugh, the only others to have got to that mark.

His best all-round performance came in the recent home series against minnows Bangladesh. He took five wickets giving away only 29 runs in the Bangladesh second innings in addition to the unbeaten 139 he made in the only innings that the home side played. Kallis’ performance helped his team win the Test, the second of the two-Test series.

It helps to play in a team like South Africa where each one complements the other and if one man collapses the other rises to the occasion.

So it is easy for him to cover his blemishes as well. But for a player like him who has had 19 man-of-the-match awards apart from five man-of-the-series awards in a 168-match career, what more can anyone ask from a player?

All that we can do is wait for the South African show to open to the crackling sound of leather being dispatched by timber if not of the ball crashing into the stumps.

(The writer is a contributor to www.HTcricket.com and is the author of the forthcoming title from Penguin India—Under a Cloud: Life in the Wettest Place on Earth)