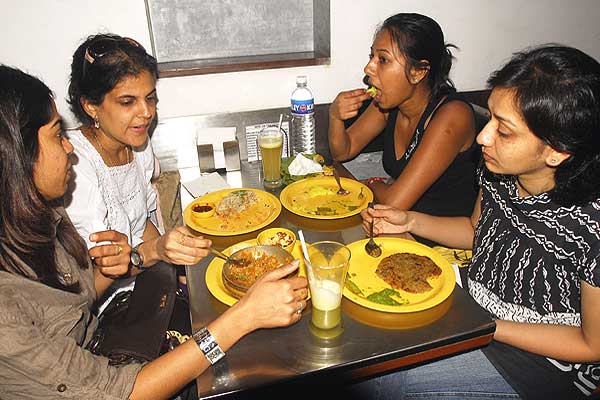 How To Eat Millets

Even in the world of grains, there is a caste system. Millets like jowar and bajra have always been stereotyped in the urban mind as lower down the scale from rice and wheat—feed strewn on streetcorners for birds to peck at; or the stuff of thick rotis to nibble at the occasional faux-rural event, but never at a fancy five-star lunch. But that’s changing. As urban Indians seek more nutrition off their plates, millets are acquiring a new respectability. And nowhere is it more evident than in the kitchens of Bangalore’s new ITC Royal Gardenia hotel, where executive chef Madhu Krishnan whips up millet and blueberry muffins, multigrain dosas, ragi sevaian and bajre ki khichri, all in the pursuit of “wellness”, the latest fad in the hospitality trade.

But some fads are actually good for us, and the millet revival is clearly one of them. If you were to draw a bar graph comparing the nutritional content of millets with that of rice and wheat, the millets’ bars would tower imposingly. Calcium content in finger millet (ragi) for instance, is nearly 350 mg for every 100 grams. For the same amount of rice and wheat, it is below 50 mg. Millets also contain far higher amounts of iron, fibre and essential minerals than either rice or wheat. Says Ishi Khosla, a Delhi-based clinical nutritionist, “I now advise my clients to switch to millets.” They are also showing up on menus in restaurants in Mumbai: the popular Swati Snacks has introduced khichri and uttapam made from bajra and the upmarket Moshe’s offers a range of breads made from millets.

Believed to be native to Africa and China, millets comprise various grains. The most important ones in India are pearl millet (bajra), sorghum (jowar), finger millet, foxtail millet (kakum), little millet and barnyard millet (sanwa). Some are eaten in their granular form but most are pounded into flour and then used to make a range of dishes. Apart from using millets in her hotel kitchen, chef Krishnan has, like other health-conscious urban Indians, taken to using them ingeniously in home cooking too. “For the last few years, I mix liberal quantities of ragi, jowar and bajra along with wheat for chappatis and in my batter for dosas,” she says.

Given the abundant goodness of millets, why aren’t more Indians eating these “wonder grains”? The simple answer is that not enough are being grown and marketed. The Millet Network of India (MINI), formed in 2007 to revive millets, estimates that 44 per cent of millet acreage in India was diverted for rice and wheat between 1966 and 2006, a lot of it during the ‘Green Revolution’. This happened mainly because state support for farmers moved to rice and wheat, forcing many to give up millets.

In hindsight, that seems to have been a foolish decision, not merely because of the high nutritional value of millets, but also because they are far hardier than rice and wheat, whose productivity is likely to be hit by weather imbalances caused by climate change. Moreover, since they require virtually no synthetic fertilisers or pesticides, most of the millets produced are effortlessly organic, something that appeals to us much more today than it did a few decades ago.

The good news, though, is that Indians are still the globe’s largest consumers of millets, eating 42 per cent of the world’s total production; and for this we have to thank traditional food habits rather than modern ones. For generations, millets have been part of the diet in rural homes. This is especially true of semi-arid regions like Rajasthan or Telangana, where millets grow extremely well, requiring little water, unlike rice and wheat. (To illustrate the case, Bejad ki roti, made from a mix of sorghum, wheat and chickpea flour, has always been widely eaten in Rajasthan.)

As health consciousness grows more entrenched in urban India, producers of organic foods are recording an encouraging spurt in the urban consumption of millets. In Bangalore, Pristine Organics has seen its sales of millet-based food products go up from Rs 3 crore in 2007-2008 to Rs 10 crore in 2008-2009. Points out managing director K.C. Raghu, “People are becoming wiser to one of the most important health benefits of millets—that they offer complex carbohydrates that sustain us longer.” He stresses, as Khosla does, that they are far better for us than refined carbohydrates, most of which come from products like polished rice. These seep into our blood more quickly because they are simpler to digest, making us hungry more often. And because we burn carbohydrates more slowly than we consume them, the leftovers pile on within us as fat.

Chhattisgarh Agricon, a company of ‘agropreneurs’, began sourcing millets in 2008 from 300 farmers and selling them to urban consumers. Buoyed by the response, they have added another 450 farmers this year. “Like oats, millets too have the potential to corner a big share of the health food market. Many of their properties are similar,” says Rajnish Awasthi, Agricon’s CEO.

In recent times, these nutritious grains have even caught the attention of Bill Gates who in 2008 donated over $23 million to develop the productivity of pearl millet and sorghum. “Agriculture so far has focused on quantity and our thrust on rice and wheat has led to malnutrition. Now the focus is on quality,” adds I.S. Khairwal, a scientist with the Indian Council of Agricultural Research’s pearl millet division.

The millets’ revival is also getting a boost because of the recent spate of health foods hitting the Indian market in response to high consumer demand. One of the constituents in Britannia’s recently launched 5 Grain biscuits is finger millet; and the trendy Fabindia has taken to stocking millets porridge. The multigrain breads that are now a regular feature on urban breakfast tables are generously showered with millets. Even multigrain flour and ready-to-eat chapatis, launched in the last few months, now come packed with millet flour. But there is a long way to go before a complete revival is in place. The caste system isn’t quite abolished yet.