'I've Been Given Assurances By BJP Leaders' 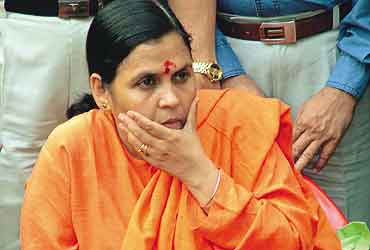 outlookindia.com
-0001-11-30T00:00:00+0553
Besides being one of the most colourful and controversial politicians on the Indian public stage, Uma Bharati packs a special punch as a backward caste leader. The former chief minister of Madhya Pradesh spoke on her recent troubles in the party and her expectations from the BJP's central leadership. Excerpts:

Have you really reached some sort of understanding with the BJP high command in Delhi? Is that why you are calling off your "show of strength" in Bhopal and proceeding to Bihar to join the election campaign?
There was dissatisfaction about the state government in Madhya Pradesh expressed to me by some MLAs and ministers. I brought this to the notice of the party high command through proper procedure and channels. After taking note of the problems, the central leadership has given me some assurances. I use the word assurance, not promise—because that's a meaningless word. Atalji, Advaniji and Jaswant Singhji have given me these assurances but I can't reveal any more details. After getting these assurances, I'm proceeding to Bihar.

During the latest episode, you were seen as having targeted the RSS because you attacked senior Sangh leader Suresh Soni. Are you really targeting the Sangh?
I truly believe that while my body may have been given to me by my parents, I have got my ideology from the RSS. That is why I don't want to comment on the RSS. I believe it is my misfortune that the letter was "talked" in the press. I use this word because it was not leaked but portions were read out to some media persons. That letter was an expression of the anguish of a daughter to her father. I don't want to say anything else.

Is it true that many of your party colleagues in Delhi are scared of you?
I'll do some introspection on this. I will think about where I am going wrong if my colleagues are actually scared of me.

What do you think of the perception that Advaniji is backing you?
I am a BJP worker. He is the BJP president. The president should back all the workers.

In the past, you've publicly targeted certain individuals like Venkaiah Naidu and Pramod Mahajan...
I've been told that such matters should remain confined to the internal party forum. I will not say much except that I will introspect on this.

Do you believe you were tricked out of the MP chief ministership by your own party leadership?
No. I offered to resign when criminal charges in the Hubli flag-hoisting case against me were suddenly revived. I appointed Babulal Gaur as the MP chief minister. After that unfortunately I was thrown out of the party. So, I did not expect to be made chief minister. But since it was I who led the election campaign for the BJP that ousted the Digvijay Singh government in MP, I consider it my duty to bring the MLAs' grievances before the BJP central leadership.

Do you believe the BJP does not have the capacity to treat its OBC leaders fairly? Were you and Kalyan Singh earlier cut to size because of the power you could wield within a party dominated by upper castes?
If the BJP appears to be like that, it is very damaging for it. In this age, the BJP cannot afford to appear like this. I will make some suggestions to the party leadership to correct this impression.