It's Where The Village Road Forks 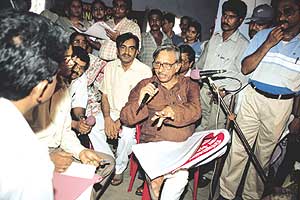 When Union minister for petroleum and panchayati raj, Mani Shankar Aiyar, decided to visit Shiyakhala, a gram panchayat, the residents were expecting a whirlwind tour. Instead, Aiyar spent almost a whole day trawling through the record books and accounts of this 30,000-populated gram panchayat. He spoke to individual residents through a translator and even sat through a longish gram sansad meeting. "He was very thorough," says pradhan Somnath Ghosh. His panchayat recently undertook an experiment to form a ‘gram unnayan samiti’ that would disburse local funds and take up projects itself rather than keep referring back to the zilla parishad; he said Aiyar "inspired" his team to push ahead with more people participation.

Exactly what Aiyar was hoping to hear. He’s currently on a road trip to every state in the country—he plans to visit one every month till 2007, and check out panchayat pockets—to see if the system is working. That reforms in this sector are not merely on paper, and the panchayats are truly empowering local people. At base, the ministry’s mandate is to build up a bank of the "best practices" in each state that others can draw from. "We’d like to offer a basket of good policies," says T.R. Raghunandan, joint secretary in the panchayati raj ministry. In April, the ministry instituted a committee of chief secretaries and state panchayati raj secretaries to keep state channels buzzing.

So how will this work? After recent visits to Karnataka and Bengal, Aiyar’s team has mapped a list of the most innovative, grassroots reforms. In Karnataka, for instance, the minister was impressed by the taxation campaign of the panchayats. The latter had—of their own volition—even started drawing up a bpl list and building up local citizens’ databases." Aiyar is now scouting for other such possibilities.