The US balances India and Pakistan, goading India in to recalling its envoy to Pakistan and snapping rail and bus links. 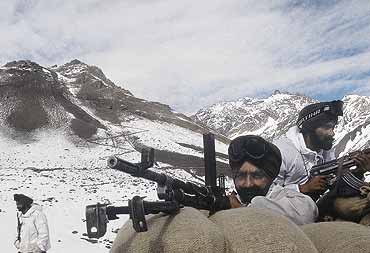 outlookindia.com
-0001-11-30T00:00:00+0553
When the news about the December 13 attack on Parliament raced across the information superhighway, most world leaders instinctively knew South Asia was facing yet another crisis of gargantuan proportions. Their logic was that post-September 11, when the US had demonstrated the effectiveness of military action to counter terrorism, India too would retaliate against the menace of trans-border terrorism that has plagued it for decades.

No wonder among the many heads of state to talk to Prime Minister A.B. Vajpayee was George W. Bush. The US president commiserated with Vajpayee and thought he ought to be pleased at Pakistan President Pervez Musharraf's prompt condemnation of the attack on Parliament. But the PM put aside his usual politeness and reticence to tell Bush that Musharraf had an obligation to go beyond mere expressions of condemnation and sorrow. In other words, Vajpayee was telling Bush that Musharraf had to act against those organisations which use Pakistani soil for terrorism.

Obviously, for Washington, the possibility of an Indian retaliation against the attack on Parliament, for which there was growing clamour in the media and the political class, held out dire possibilities of complicating its Operation Enduring Freedom. In the days following the attack, US secretary of state Colin Powell kept in touch with external affairs minister Jaswant Singh and the US ambassador to India, Robert Blackwill, met Jaswant Singh more than twice, hoping to prevent the acrimonious war of words from snowballing into some kind of armed conflict.

The December 13 attack put the government in a dilemma. Were it to not retaliate, then this could only bolster the impression that the Vajpayee government wasn't capable of managing the nation's security. (Remember, the Kandahar hijacking drama was forgotten only because of Kargil).

But military action was put on hold, pending the kind of responses India elicits from Pakistan. In other words, a diplomatic offensive was to be India's first response. A government source told Outlook: "What has a war ever solved between India and Pakistan? Will our taking over, let's say, Muzaffarabad, help?" Added another official, "If we get on the escalatory ladder, there's no guarantee we can get off after a couple of rungs."

India then decided to formally tell Pakistan what it expected from it. On December 14, Pakistani High Commissioner Ashraf Jehangir Qazi was summoned to South Block and told Pakistan should close the offices of the Jaish-e-Mohammad (JeM) and the Lashkar-e-Toiba (LeT), cut off their sources of funding, freeze their assets and place their leaders under detention. India also rejected Pakistan's offer of a joint probe to determine the identity of those responsible for organising the attack on Parliament.

Meanwhile, realising that other countries, most of all the US, could compel Musharraf to initiate action against terrorist organisations, the Indian government on December 20 formally called the envoys of the US, UK, Germany and France to brief them on the progress made in investigating the December 13 attack. The message was clear: they must pressure Musharraf into acting against the LeT and the JeM, whose leaders have been publicly issuing threats of assassinating Indian leaders. What New Delhi was also subtly suggesting was that it couldn't remain satisfied with the recent changes in the semantics and vocabulary of Washington and Islamabad's description of terrorism.

The results were quick to follow. On December 20, hours after the foreign envoys had been briefed about the investigation, Bush in his speech to mark the 100th day of the September 11 attacks added the LeT to the list of terrorist organisations whose assets had been earlier frozen through a presidential order. The only other organisation that Bush also targeted the same day was, coincidentally, also a Pakistan-based one, the Ummaat Tameer-e-Naw. Significantly, Bush declared, "I also look forward to working with the governments of both India and Pakistan in a common effort to shut it (LeT) down and to bring the killers to justice."

But much to India's chagrin, Bush also said: "Lashkar is an extremist group based in Kashmir. LeT is a stateless sponsor of terrorism, and it hopes to destroy relations between Pakistan and India and to undermine Pakistan's President Musharraf." This statement, essentially absolving Islamabad of all complicity in cross-border terrorism, angered New Delhi into retaliating against Pakistan on December 21. It decided to:


The recall of the ambassador has effectively downgraded India's mission there. Other steps the government could take include the scrapping of the Most Favoured Nation status to Pakistan, denial of overflights and a further reduction in the size of India's diplomatic presence in Islamabad.

The unfolding events underline the difficulties ahead. While New Delhi sees Musharraf mainly in black and white, and holds him directly responsible for terrorism, the American perception is greyer. Washington feels the Pakistani president is helpless, that he must be allowed space for manoeuvre and go beyond the shuffling of a few top posts in the ISI.

It is difficult to tell how the steps taken by New Delhi would compel Pakistan to act against terrorist groups but there's no denying such action is bound to lead to a sharp downturn in relations, rendering it more difficult for the two countries to deal bilaterally.

Also, with the elections in Uttar Pradesh looming ahead, and the BJP not expected to do well, the government is placed in the unenviable situation of having to distinguish policy from politics. The breathtaking quickness with which the government on the basis of "technical evidence" blamed the LeT first and then JeM led to calls for a joint investigation, FBI help as well as repeated requests from Washington for sharing the result of the ongoing investigation.

In fact, sources involved with the investigation told Outlook that substantial investigative work still remains to be done. Follow-up on the Jammu and Kashmir end of the conspiracy is still pending. The laptop computer that was recovered from the car of the suicide squad is still being examined. Investigators are proceeding cautiously so as not to trigger self-destruct softwares and obliterate evidence.

With the elections in Jammu and Kashmir also due in 10 months, the government will also be under some pressure to get a more effective handle on militancy and infiltration in order to stem terrorist traffic from Pakistan-occupied Kashmir. Given the current climate, sources say that if the infiltration doesn't go down, the government would have to examine various options in an attempt to put a stop to it.This process, it is understood, will involve identification of vulnerable points along the LoC and suitable follow-up action to deny physical access to these points. Sources told Outlook that the process of evacuating villages in the Rajouri sector had already begun. It is unclear if this is in anticipation of retaliation in case of increased shelling across the LoC or for other unspecified measures.

But all this is a task for months ahead. For the moment, though, the government has diplomatically embarked on the task of bringing other countries around to the view that "the epicenter (Pakistan) of terrorism is not getting the focus it deserves".

A Price-Tag On The Nation