Public sector banks trying to shed flab go for VRS, which is great news for employees, not so good for banks 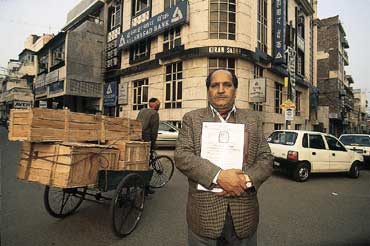 outlookindia.com
-0001-11-30T00:00:00+0553
Fortune's finally smiled on 55-year-old D.N. Gupta (name changed). After serving the United Bank of India (ubi) in Delhi for 30 years, he's been rewarded with a golden handshake. And, boy, does that glitter! A package comprising an equivalent of 60 months' current salary, pension, gratuity and all other benefits of a serving employee. The financial benefit would have been the same for him had he decided to toil for the rest of his working life of five years—by opting for the voluntary retirement scheme (vrs), he actually saves himself the transport cost and the daily grind! Does Gupta have the power to refuse? No way.

Jayanthrao Ullal, 46, is as happy with life's sudden turnaround. A senior manager with Punjab National Bank in Mumbai, he's set to gain Rs 9.5 lakh from his vrs deal. Even accounting for tax, he'd be taking home an amount close to his current monthly salary of Rs 11,000 for the rest of his life from his normal retirement benefits. Smirks Ullal: "I can now spend time at home even as my income remains the same, not to mention the tidy sum I now have to invest."

In Calcutta, 48-year-old Soma Dutta had a safe and secure job with the Indian Overseas Bank (iob). But the mother of two with 20 years of work behind her, has still opted for the vrs, along with two of her colleagues. "It's better to quit when the going is good," she explains. "The situation could become difficult later on, the money or the scheme may change." Right now, she might net a cool Rs 4-5 lakh.

Needless to say, the public sector bank vrs has been a rip-roaring success. Bank staff are so anxious to get out that most people talked to Outlook on conditions of anonymity, afraid that too much publicity may scupper their chances or the final package. The scheme opened last month with an idea to shed at least 10 per cent of the staff of 19 public sector banks. As applications poured in, it was clear that not only would the target be met but at the end of it, North Block would probably regret going in for such a high-cost slimming capsule.

For, the vrs is expected to lead to an outgo of Rs 4,000-5,000 crore, capable of wiping out the net profits of most banks. Most of them have very slim profit margins—while some make losses. ubi, Uco Bank and Indian Bank have already been declared as weak banks. With over 50,000 people already applying for vrs and the average compensation ranging from Rs 9 lakh to Rs 20 lakh, most banks are facing an outgo of Rs 250-300 crore. As a result, they have fixed a meeting this week to review the vrs plan, the compensation and the immediate impact of such a sudden reduction in staff strength.

Worse than the funds crunch is the sudden vacuum in policy- and decision-making in some banks. The vrs scheme is, by design, barred to employees with less than 20 years of service or under 40 years of age, and allows either two months' salary for every year of service, or full salary for the remaining months of service, whichever is less. As a result, the financial package has turned out most attractive for the senior management cadre in the age group of 45 to 55 years. In most cases, the resultant exodus has not only frustrated the bank's goal of getting rid of the unwanted but led to an unintended vacuum in several branches. In a few branches, notably a Dehradun branch of the State Bank of India (sbi), the entire staff has opted to bow out.

Officially, the banks maintain that the move to introduce vrs was part of the Indian Banks' Association's strategy to bring in "young blood and professionalism" and proper manpower planning in the banking sector, especially in some banks having an overwhelmingly aged workforce. But post-vrs, the unions are now complaining of their members letting them down. Says J.S. Bhattacharjee, secretary to the ubi union and also a deputy manager with the bank: "Employees feel the package is extremely lucrative. And the compensation amount is being paid in advance which allows proper planning for the future. Who knows if the policies change due to competition next year and we are left high and dry?" No wonder that Bhattacharjee, who has seven years of service still, is going in for the vrs. His expected compensation: a grand Rs 20 lakh.

Clearly, old-fashioned union loyalty has no chance against lumpsum compensation. Worried about the high turnout, one of the employees' trade unions, aibea, issued a strong note to its comrades: "It is most unfortunate that despite clarity of views on the issue, a large number of employees, showing scant respect for the union's advice, rushed in hundreds to opt for vrs... It is a matter of shock and dismay that some union leaders have also opted for vrs." Says general secretary Rama Nand: "vrs is a big step towards de-unionisation."

So, is it a great victory? Hardly. For the sbi for instance, the 22,000-plus applications against a total nationwide staff strength of 2.33 lakh (with 65,000 officers), mostly coming from the senior staff, have created a unique problem. It is now seriously thinking of using its discretion to keep back the worthy. A process of persuading younger and skilled officers to withdraw their application is also on. sbi is one of the few banks which is meeting its entire vrs liability in cash. Pressed with a shortage of funds, several other banks have decided to take an easier route: 50 per cent cash, the rest in government bonds.

Canara Bank and Bank of India have both received 7,000 applications—the former expects the final tally to cross 10,000. Punjab National Bank, the first to complete its vrs exercise, bid adieu to 6,000, while Uco Bank and Bank of Baroda clocked over 4,000 each. Most of these banks plan to make the vrs payments out of their gross profits for the fiscal ending March 31, 2001. Andhra Bank, for instance, will have to forego Rs 180-200 crore out of its estimated profit of Rs 300 crore for this year. In the case of ubi—which according to its unions, is expected to earn only Rs 51 crore—the vrs liability of Rs 200-220 crore may force it back into the red. In one ubi branch in Chennai, except for the top man, everybody else has applied. Punjab & Sind Bank (p&sb), which doesn't expect a good profit this year, has had over 17 per cent of its staff opting for the vrs, against a target of only 10 per cent.

Bankmen also find that in today's competitive environment, vrs is a respectable way out of staid old jobs. Banks are already under the hammer of privatisation, there is no job security as it used to be 10 years ago, and rampant transfers to hard-working posts in rural areas are a distinct possibility. An added fillip has been the move to cut the retirement age in banks to 58 years. Says a p&sb employee: "If the age is 58, I lose two years of service anyway. If I retire now, I get paid for service up to 60 years."

And nationalised banks haven't been famous for an incentive-based work culture. Says G.P. Singh (name changed), a p&sb officer who has opted for vrs: "You never get any credit for outstanding performance but if you mess up once, the discredit you get is difficult to get rid of in a lifetime." Says Dutta of iob, Calcutta: "Apart from a fear psychosis, the old warmth among employees is missing." Adds Singh: "It is better to retire now and gain a lot than to get thrown out after privatisation."

So will we have a huge number of jobless bankmen floating around? Not really. While the younger ones are getting snapped up by the private sector, the older ones plan to make a living from investment or advising other people on how to invest or consultancy, that wonderful one-word-fits-all profession. Says one: "I have a Master's in English. I'll start a coaching service in my native Patiala. But with the compensation package I expect, I don't need to do anything." Says Ullal: "A senior bank employee has several options—he can start consulting, or head the banking division of a corporate. He can even join a private bank."

Do we look forward to a happy ending then? Well, yes and no. The post-vrs scenario will be tough. To those who stay back, the government's already dangled the carrot of promotion. Most of them are poised to get double, even triple promotions, to run the show in desperate, short-term situations. Says Bhattacharjee: "What they don't realise is that the workload would be far more than the gains. The working of the banks will also suffer due to lack of quality and experience." At the Manipal-headquartered Syndicate Bank, for instance, 1,000-odd clerks are becoming officers by default.

And the scene is set for a drastic restructuring of banks. Post-vrs, several unprofitable branches are likely to be either closed down or merged into other branches. Calcutta's Allahabad Bank has already declared that its zonal offices would be dismantled and staff moved to branches. Indian Bank, too, has decided to remove the zonal tier and redeployed staff in branches. Says Bhattacharjee: "Soon, there'll be only four to five strong banks with all others merged into them." A bitter medicine, but unavoidable if India wants to strengthen and globalise its banking standards.

"The temple is another VHP stunt"