Everyone knew it was a done thing, but the 11 MPs caught on camera has exposed the rot in our legislatures. What can be done to clean up the system? Updates 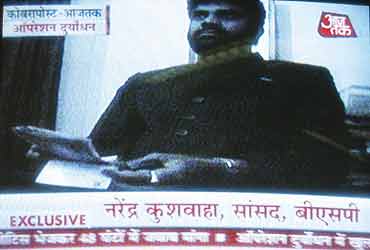 outlookindia.com
-0001-11-30T00:00:00+0553
Sometimes the simplest of images tell the starkest tale. The sight of honourable members of Parliament smiling, looking shifty-eyed and then calmly pocketing cash to ask questions in the august House, has stunned the entire political class in the national capital. A hidden lens has literally splashed mud on the face of the Indian MP. As Union parliamentary affairs minister Priyaranjan Das Munshi puts it, "We are in deep shock and trauma."

What makes it worse is that parliamentarians and journalists have known for years that questions are asked in Parliament for a price. As Congress MP in the Rajya Sabha Jairam Ramesh puts it, "Right through the '80s, it was known that petrochemical and pharma companies were using MPs to raise and counter questions in the House. Those were big corporate lobbies at work—and the problem is not unique to India." Almost to add insult to injury, the motley crew of MPs caught on tape (six from the BJP, three from the BSP and one each from the Congress and RJD) were being purchased cheap, the amount ranging from a measly Rs 15,000 to Rs 1 lakh.

Clearly, Indian democracy had been devalued and dragged through the mud. But the biggest blow was delivered to the party of the faithful, whose six MPs were trapped with hands in the till. Unlike the BJP's response during the Tehelka 'defence deal' expose, when they went after the messenger (the NDA was then in power) and tried to brazen it out, this time round the party quietly accepted the veracity of the blurred video image. It acted quickly, demanding an explanation from its MPs, asking them why they should not be expelled. BJP leaders like L.K. Advani gave stern sermons on the need for probity and morality in public life. The buzz was that by the end of the winter session of Parliament, concluding on December 23, all the 11 MPs, including the BJP's dirty half-a-dozen, would be asked to resign. 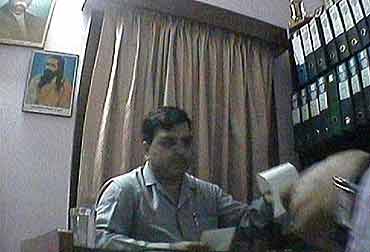 It is not the numbers alone that make this a huge embarrassment for the BJP. It is the nature of the party, which addresses a large constituency in the big metros, small towns and mofussil headquarters. True, BSP chief Mayawati is livid that three of her MPs were trapped. She's been charging the website that worked on the undercover operation with taking money from her Uttar Pradesh rival, Mulayam Singh Yadav's Samajwadi Party. Her immediate concern, though, would be the possible disqualification of three of her party MPs from the House. There won't be any long-term damage to her votebank. Similarly, one MP from Laloo Yadav's RJD is also in the net. But again, the RJD vote largely operates on the basis of caste and community. Corruption is never a big issue for its votebank. 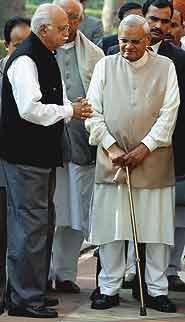 Their image, as projected in the media, is not a matter of grave concern for either the BSP or RJD. But the BJP—which used to stake claim rather pompously to the status of being a party with a difference—is deeply image-conscious. This has hit the party hard on the eve of its silver jubilee celebrations. Says a general secretary: "We are facing a leadership crisis, moreover there is an attack from outside by people like Uma Bharati, Shatrughan Sinha, Govindacharya and Yashwant Sinha. We had just recovered some ground in Bihar... and now comes this bombshell." This has only contributed to the deep identity crisis gripping the BJP. Is it an ideology-driven party? Or a party of coalitions? A party of leaders? Or of cadres? What is certain is that the BJP's self-image of being a party of character (chaal-charitra-chehra) has been irreparably damaged. The fact that one Congressman has also been caught is small consolation.

And it's not just the BJP, the shock extends to the entire Sangh parivar. Three of the party MPs trapped on camera were closely associated with frontal organisations of the Sangh. What's worse, some of them took the bribes right in front of portraits of Sangh stalwarts M.S. Golwalkar and K.B. Hedgewar. Says RSS spokesman Ram Madhav: "The television visuals that show Guruji and Dr Hedgewar have shamed us. The whole episode concerns us deeply as it shows the degeneration of the entire political class. It makes democracy redundant. The RSS will continue in its efforts to inculcate values but the burden of stemming the rot rests on political parties." 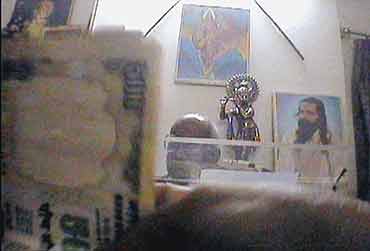 The only group of MPs that emerges squeaky-clean from the entire enterprise is the bloc of Left parties. Part of the reason is that Left MPs are such diligent parliamentarians that they are unlikely to fall for such a trap. Their preparation for every session is rigorous and, if one Left MP was to table an odd question, his colleagues would probably spot it. The CPI(M)'s Nilotpal Basu reveals that before every session of Parliament, the party office prepares several questions which may then be tabled through individual members. "Many members also raise questions independently. That freedom is there and should not be curtailed. But if the Left finds itself unscathed, the reason is probably the ideological commitment we have. I believe the result of this expose will be good. We all knew it was happening but now we can take steps to try and curtail it," he says.

Another reason why the Left emerges unscathed is the fact that they are not likely to be approached by corporate lobbies. Although this expose involved small change, the problem of lobbyists using MPs is not unique to India. Even as the Indian MPs were getting unmasked, Washington DC was being rocked by a scandal where several Republican Congressmen were being charged with accepting bribes from lobbyist Jack Abramoff. The amount involved, however, is millions of dollars. Similarly, five years ago, the British House of Commons faced a similar embarrassment when MPs were found asking questions for cash payoffs. Ever since, the issue of "standards in public life" is frequently dealt with by the British parliament. Paid advocacy—that is, speaking on behalf of or raising a question for which an MP is receiving payments—is not allowed. In India, both the Rajya Sabha and Lok Sabha have ethics committees, which are supposed to lay down standards. Clearly, some members pay no heed to such matters. 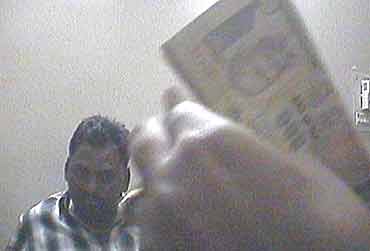 Many political commentators believe the problem lies in the nature of our electoral system. Jai Prakash Narayan, who founded 'Loksatta' that works for clean governance and political reform, believes the incentives in the Indian system are all wrong. A member of the National Advisory Council, he says: "Politics has become a business in India. Although spending money does not guarantee victory, not spending it guarantees political defeat in elections. Elected representatives try to earn that money back through transfers, contracts and tenders, influence-peddling for corporate lobbies, MP and MLA funds and parliamentary questions." He believes the answer lies in electoral reforms where the proportional representative model—in vogue in 90 countries—is applied instead of a system where a small margin makes the difference between victory and defeat.

It is certainly a point to ponder as we yet again come to terms with the reality that the greatest Indian achievement of the modern age, its successful democratic model, could be rotten from within.