Is the teaching in our schools actually educating our children? Not really, according to a few grim surveys... 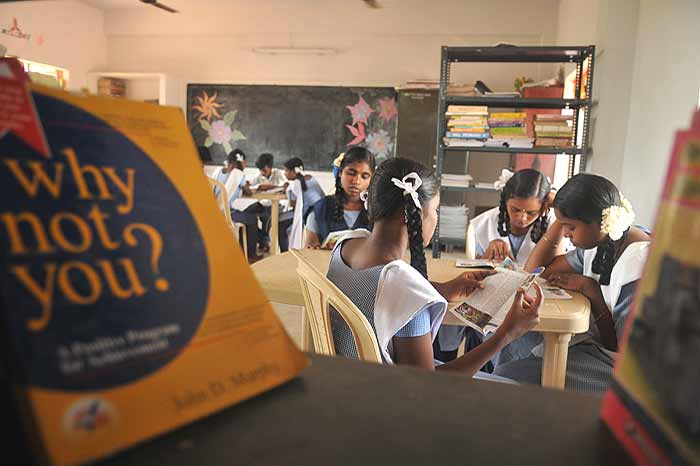 Which of the following is true: nearly 10 per cent of Class 4 students in top urban Indian schools believe that Mahatma Gandhi is alive. In Tamil Nadu, only 15 per cent students in the 15-year age group are skilled in maths. About three-fourths of Class 3 students in rural India can’t solve two-digit subtraction problems.

All true. How did you score?

Three recent reports—Pratham’s Annual Status of Education Report (ASER), the Programme For International Students Assessment (PISA) and the Quality Education Study (QES) by Wipro and Educational Initiatives—serve a gloomy, telling reality check, busting some long-held stereotypes about the strengths of Indian students. The smart Indian techie, the world-beating Indian students at spelling bee contests and math quizzes, the brainy, high-IQ geniuses at Ivy League colleges, are they all a thing of the past? The new breed seem to portend a horrifying tale: not only are our kids not getting any smarter, they actually seem to know less than their peers from a few years ago.

More than a third of Class 4 students think Rajiv and Indira Gandhi are still around.

Consider this: in the top 89 urban schools across the country, the QES report says, there has been a 5-10 per cent drop in learning levels in the last few years in math, science and reading literacy. The PISA report, which conducted an extensive study among 4,800 15-year-olds in the high-literacy states of Tamil Nadu and Himachal Pradesh, is even more grim. Among 74 countries—including the US, UK, Canada, China, Korea, South Africa—Indian students rank second to last, at 73rd position, just above Kyrgyzstan. This, despite a high enrolment rate of nearly 97 per cent, the Right to Education being in place since 2010, propped up by a wave of progressive schools and teaching tools. “I know a lot of people who’re up in arms saying these reports are not valid, but why can’t we just accept that there is something seriously wrong with the way we’re teaching?” wonders Maya Menon, director, The Teacher Foundation, an organisation that looks at enhancing teaching techniques. The system is dumbing down our children, undermining their capacity to learn, breeding a whole lot of boredom in classrooms, she feels. HRD minister Kapil Sibal admits as much. “What we need is a paradigm shift in the way we teach and the way children learn,” he says.

The issues are not new, but the paradox looms larger than ever. India has one of the world’s youngest populations, it is poised to become the knowledge engine of the world to China’s manufacturing mettle—this is what we are led to believe. But can the new generation fill those shoes? These findings impart a new urgency and depth to our understanding of India’s education crisis. “The average Indian kid has greater ambition, greater access to information, greater aspiration and is far more secure,” says Giri Balasubramanium, founder, Greycaps, a quizzing company. But our classrooms have failed to match up to that challenge, or channel that swelling ambition. “We don’t have a clear vision as far as education is concerned. Rote learning continues to thrive in our best schools, and even while we’re trying out new methods of teaching, it’s like tasting new flavours, not changing anything fundamentally,” says Maya Menon.

There have been a few tentative steps in the recent past. Apart from the Comprehensive Continuous Evaluation (CCE) that is already in place in many schools, last week the move for a single engineering entrance test was announced, to try and tweak the nature and frequency of exams. But are these changes radical enough to stem the rot that appears to have set in at the very core of education? “It’s our legacy of 60 years,” says Sibal, “and it can’t change overnight. It’s a very complex issue.” There’s also the challenge of age-inappropriate textbooks, unimaginative teaching and a 1.2 million shortfall of teachers. “The impact of the rte will be felt only after 5-7 years. The state of education is essentially at the doorstep of state governments, they haven’t invested enough in it over the years,” adds Sibal. “We must ensure the quality of government schools matches that of private schools.”

That may not seem like such a good idea anymore. After all, top private schools tested by the QES have revealed a serious lack of basic skills in students, pointing towards a sociological shift in attitudes towards learning. “The real culprit for the decline in learning are changes in lifestyle, where entertainment has taken the space of education,” says IIT computer science professor Sanjiva Prasad. India’s traditional urban middle-class ethos of a single-minded approach to academics is under threat with the post-liberalisation generation of parents and their growing children, say some sociologists. “Schooling is not at the centre of their lives. They have so many distractions—social gaming, social networking, hanging out with friends—and it all takes away from learning,” says sociologist Meenakshi Thapan. But all the networking with the outside world has not helped in changing some deep-seated prejudices. According to the QES findings, the societal biases of children in private schools in the metros are rather glaring. For example, nearly half of Class 8 students in top private schools in the cities feel that girls needn’t go to school. Says Vyjayanthi Sankar of the Ahmedabad-based Educational Initiatives, who conducted the QES with Wipro, “Unless we inspire our kids to think on their own, they won’t think around these biases, and society is not going to get better.” 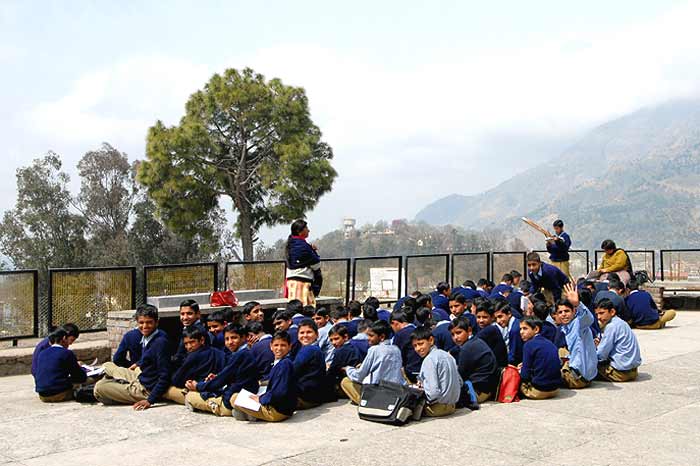 Illusional summits A class in the open at a government school in Mandi district, Himachal Pradesh. (Photograph by Narendra Bisht)

That can come only with a complete overhaul in how we teach. For instance, the PISA research finds that the Indian curriculum covers more topics, compared to, say, the UK or Australian syllabus, which provides students with a broad learning base, so they are able to respond well to questions where they need to retrieve information. But where they have to interpret and integrate, most Indian students find it a challenge. “This has an impact on the quality of human resource. Students may get employed easily, but what about the quality?” asks Ratna Dhamija, manager, Australian Council for Educational Research in India, which conducts the PISA test. That’s a serious concern, particularly for the future of maths and science. Is the land of C.V. Raman and Srinivas Ramanujan drying up? “The power of education has increased,” says Anand Kumar of the well-known IIT coaching centre Super 30 in Patna, “but knowledge levels have dropped,” he says. So much so that he has had to double the number of classes at his institute in the last year, from three days a week to six. “Today’s students have to work twice as hard, as their basics in subjects like mathematics aren’t strong enough.”

How many legs on an ettukapoochi (eight-leg insect i.e. spider)? Nearly half of Class 4 TN students said 6.

Recently, Prime Minister Manmohan Singh declared 2012 as the National Mathematical Year. The subject could well do with all the attention it can get, says S.R. Srinivasa Varadhan, a mathematician at the New York University. “The IT and MBA boom has taken the best students away from mathematics and science,” he says. Agrees D.V. Prabhu, professor of chemistry at Mumbai’s Wilson College: “The number of students opting for a degree in science and mathematics has reduced by about 50 per cent. This is paradoxical, as the avenues for science graduates have increased due to jobs created by the nuclear energy and space programmes.” Gaurav Tekriwal, president of the Vedic Math Forum, sees a crisis looming. “Even though parents and kids are warming up to Vedic Maths and Abacus classes, the maths scene in India is mostly driven by competitive exams like the IIT-JEE and CAT. No student wants to take up maths as a profession. I see a serious shortfall of maths teachers very soon,” he predicts.

One in ten students of Class 4 from 89 India's top schools thinks Mahatma Gandhi is still alive.

There is a mismatch between the mathematical needs of modern society and the curriculum, feels Sanjiva Prasad. “At the moment, the CBSE curriculum is seeing a dumbing down. What we’re hit by is students not internalising math but just learning formulas and falling into the question-solving mould.” Over the years, a certain grade inflation has taken place, with ever-increasing percentages of toppers in board exams and larger pass percentages, leading to an illusion that standards are improving. A ripple effect is already being felt beyond the classroom. At the Indian Statistical Institute in Delhi, for example, mathematician and professor Rajendra Bhatia worries about the quality of research candidates. “There is a general decline in school education, and by the end of college, the standard of learning becomes quite poor. The quality of research, therefore, is by and large not on a par with international standards. Finally, this also impacts the quality of manpower in the industry,” he says. 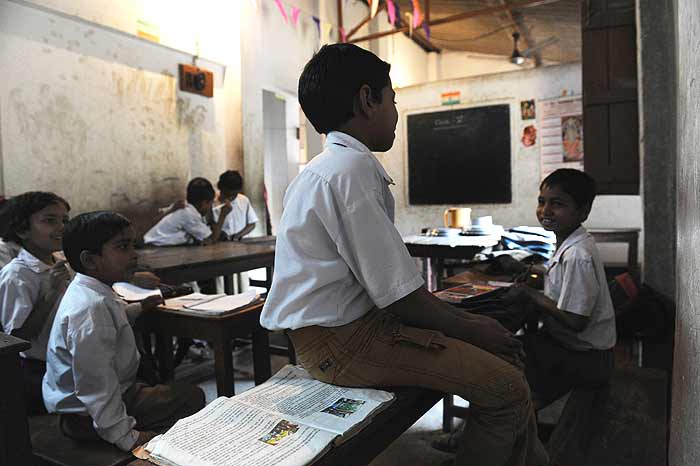 Education in half measure Children at a primary government school on the outskirts of Calcutta. (Photograph by Sandipan Chatterjee)

So, yes, we are losing the edge in pure sciences and mathematics, and academicians also see a decline in cutting-edge research in India. In 2010, China published about 10 lakh scientific papers whereas India could muster up only about two lakh. “Schools are pushing a large number of students to take entrance exams for professional schools. As a result, students are not motivated to pursue academic work in mathematics and the sciences. They enter these fields as an alternative when they fail to get into the professional schools,” says Varadhan. Even at professional schools, however, the levels of learning are slipping. At IIT, for instance, there is a lot of variability in the top 150-200 ranking candidates. “A small number is outstanding, but others struggle to pass the basic math and computing courses, and there is a general decline in language, writing and proof skills over the last 10 years,” says Prasad.

Nearly half of Class 8 students in top private schools feel that girls needn't go to school.

It’s not that there are no changemakers. They are too few. “There has been a revolution in mindsets of a sizeable number of parents and children, which itself is a great thing. Now, teachers are realising that the old methodologies of teaching have to give way to collaborative learning. That mindset has to translate to the reality on ground,” says Sibal. Viewing this changing climate closely is Teach For India CEO Shaheen Mistri, who is overwhelmed at the number of youngsters who are willing to put their lucrative careers on hold to contribute to teaching. “Thousands apply to our fellowship each year, young people from consulting firms, media firms, but only 7-10 per cent get selected,” she says. Even more optimistic is Educomp founder Shantanu Prakash, who’s working with popularising technology in classrooms, among other things. “There is so much exciting work happening on the ground, especially at the non-governmental level. Using technology in teaching, I feel, is promising for the future of education. When you look at the input into education versus the output ratio, the scenario isn’t so bad.” Sibal is ready to wager that future PISA or Pratham reports will paint a drastically different picture. We hope his optimism is well-founded.