It's Peaceful, Or Is It?

If infiltration has dwindled, why can't we withdraw counter-insurgency ops? 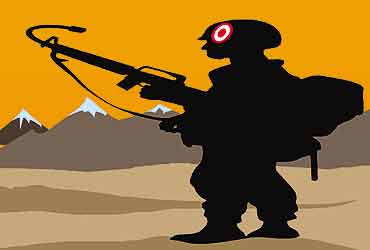 outlookindia.com
-0001-11-30T00:00:00+0553
Barely a day after the London police killed a 27-year-old Brazilian electrician on the mere suspicion that he might have been a suicide bomber, the Rashtriya Rifles counter-insurgency force in Kashmir gunned down three Kashmiri boys, aged between 11 and 15, who were returning from a marriage on the suspicion, which turned out to be equally unfounded, that they were militants. What both killings had in common was the denial to the victims of a chance to surrender before they were killed. But the resemblance ended there. The whole of Britain reacted to the mistake with shock and forced the London police on to the defensive. The police commissioner not only apologised profusely to the family of the victim, but explained at length why the police had adopted the shoot-to-kill policy in the first place.

In Kashmir, the corps commander, Gen S.S. Dhillon, was equally forthright in his acceptance of blame and expression of regret. But neither the home minister nor the prime minister publicly expressed regret for the terrible loss that the families had suffered. This difference in reactions may be rooted in the greater strength of the UK's democratic tradition, but it could also reflect the fact that the country is at the very beginning of a possible spiral of terrorism, while in Kashmir, we have been in the middle of one for 16 years. We have therefore been numbed by tragedy.

Despite that, it is imperative that we learn to feel again, for such tragic, unnecessary deaths do not merely devastate the families of the deceased but endanger the effort to restore peace. To appreciate why Kashmiris have reacted so strongly to the incident, one needs to understand the profound change of mood in the Valley since the opening of the road to Muzaffarabad. This was reflected in the small change in Kashmiri customs that, alas, got the three youths killed.

The boys were killed when they were returning from a wedding. But they were killed at night. This means that the wedding took place in the evening. Those familiar with the changes that have occurred in Kashmir during the past 15 years know that for some time weddings have been taking place during the day because no one wants to take the risk of going home at night. This became a near-universal practice after the killing of a prominent Kashmiri businessman, Baqqal, about six years ago in similar circumstances. In recent years, even on Mehndirata, the traditional groom's farewell to bachelorhood, on the night before the wedding, the host would ask the suppliers of tents and cushions to supply quilts too, so that his guests could sleep over and go home the next morning. The fact that the wedding from which these boys were returning took place at night therefore meant that Kashmiris were reverting to their traditional ways. And that meant that in the ordinary people's consciousness, peace had at last returned to the Valley.

The killing of the three youths has shown them that they were wrong. They cannot therefore be blamed if they conclude that, as in Iraq, the presence of the Indian army in Kashmir is part of the problem and not the solution.

This is a grave setback not only for the army but for the Manmohan Singh government. In the past two years, the army has bent over backwards to fulfil then deputy prime minister L.K. Advani's promise to the Hurriyat to reduce counter-insurgency offensives, and to humanise its operations. As part of this initiative, Gen Dhillon's predecessor, Gen N. Sharma, had suspended 'cordon and search' operations and deployed the RR only upon receipt of specific information about militants' whereabouts. In addition, the army had given up a whole range of search practices which tended to put people's lives and property at risk, such as returning the fire of militants holed up in heavily built-up portions of a village. In the past, the army had not hesitated to shell houses in which militants had taken shelter even though this frequently caused entire sections of the village to catch fire. In several cases, the army even set fire to houses to flush them out. In the last two years, both practices had been given up almost completely and jawans had begun to go into such houses 'cold', across open fields of fire. This had raised the rate of casualties among them from one for nine militants to one for three, but had reduced the losses of the villagers.

The army has also built scores of schools, roads, bridges, and provided drinking water systems and medical facilities to hundreds of remote villages. All this has earned it a great deal of goodwill that the recent episode has jeopardised.

There is a lesson to be learned here. In the past, when Pakistan was bent upon unleashing jehadis on to Kashmir and peace seemed a distant dream, there was no alternative to engaging in extensive counter-insurgency operations. Human rights violations were near-inevitable and all one could do was to keep them down to a minimum. Today, when infiltration from Pakistan has dwindled for three years running and is only a fraction of what it used to be; when Gen Musharraf has all but withdrawn support from the jehadi organisations in Pakistan and peace is only a short way over the horizon, the risks involved in withdrawing the RR from active counter-insurgency, and handing this task over to the J&K police are fewer than those that arise from continuing to involve it in active counter-insurgency operations. When the summer wanes, that is what the central government should do.