'It's Good That No One Gives Me A Gun'

'If I had a gun, I would still put it to Modi's head. He's a butcher. But everyone has conveniently forgotten that ... Same goes for Thackeray.' 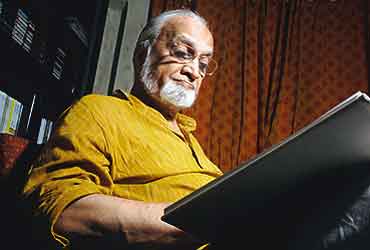 It's rare in these days of publicity-driven marketing for a celebrated playwright and author to discourage the idea of a retrospective in his honour, and decline to attend it when it happens. But that's Vijay Tendulkar. "I don't want to revisit the past," he says. The acclaimed week-long retrospective at Pune earlier this month was a benchmark of what Tendulkar means to Marathi theatre and literature, if one was necessary. And the forthcoming Prithvi theatre festival has dedicated an entire day to him. Tendulkar's snow-white beard and hair and gentle demeanour mask the tumult and anguish inside him. Words are his outlet, trenchant and razor-sharp.

At 77, with over 30 plays—half a dozen of them forming the core of contemporary Marathi theatre—dozens of short stories, two novels, translations including of A Streetcar Named Desire, several Marathi screenplays, literary and political essays, and innumerable awards, Tendulkar continues to alternately charm and shake up his readers. His world of words is not a happy one; it nurtures anti-heroes, speaking a language of latent violence. It's an intensely personal world of individuals with their small triumphs and big trials but always makes a scathing comment on the social order. He has legions of followers and a fair share of critics. Neither is important to him as he begins his third novel, after many decades, slightly amused that his most celebrated plays, Ghashiram Kotwal and Sakharam Binder, are now available on dvd almost 40 years after he wrote them. Excerpts from an interview with Smruti Koppikar:

Why are you against retrospectives?
There's no need for a festival of my work. It's happened, it's in the past. I'm much more interested in the present. That said, I was surprised by the response of the younger generation to my past work.

The broad themes in your writing have been consistent—violence in society, violence and power in human relationships. Has the creative process changed for you over the past 50 years?
What interests and concerns me the most even now is the human mind, its complexities and contradictions. The search and exploration has remained the same, but certain things have changed. My writing has become more personal. I used to move around a lot, meet people and speak to them at length, try to decipher their minds. Now, for more than one reason, the mobility isn't there. Now I move in an area that's internal, within myself, but as unknown to me as the exterior world.

So how do you now interact with the exterior world?
Mainly through the media and my network of friends. The media operates on its own fundamentals. I have no option but to read and see events and issues as you tell them...but when I do I am seized by an overwhelming feeling of helplessness.

Is this helplessness at the way things happen in our society/ country, or is it helplessness that come from personal limitations?
I find increasingly that the media is out to deceive me, me as in the ordinary reader or viewer. There is an organised effort towards that, all raw material is turned into a thriller of some kind, there's a sense of breathlessness. That's misplaced because the genuinely important issues do not induce such urgency. News has to be reached to people with facts and in its right proportion. A news event happens once but the impression I get from television is that it happens some 10 or 20 or 100 times. They have to repeat, I understand that, but the repetition often distorts the original. When this happens with issues like rape, we lose our sensitivity to it, it doesn't enrage any longer.

There's criticism that your writing carries an unmistakable stamp of journalism, is limited by journalism. ...
What is journalism? It's a genre of understanding human conditions and writing, isn't it? Finally, all those people who create fiction from their imaginations are forced to peep outside into the exterior world, indulge in a bit of journalistic exploration to enrich their writing. I have seen even highly acclaimed fiction writers feel at one stage: I have entertained my readers but, other than that, what have I said? Why else do you think a Nobel winner like V.S. Naipaul feels the urge to move around, be among human beings unlike himself, meet criminals etc. A writer, any writer, feels the urge to know and beyond a point he has to look outside of himself to satisfy that urge.

Do you have someone else too in mind?
You know Naipaul's Wounded Civilisation...I saw and read what he saw and read, but what we took from those explorations were different. For him, that journalistic-like endeavour was a take-off point to create fiction, good fiction but fiction. Such fiction creates an illusion of reality, but it has nothing to do with reality. The writer is only using journalism to fire his imagination. But if you do it when you are already a celebrity, you can't do it well. To know people, you have to observe, be part of the backdrop and that's something journalism teaches you. Not TV journalism with celebrity newspersons but good ol' traditional journalism. There's this book I recently read on Mumbai...smartly written account of the city but nothing new to say.

Suketu Mehta's 'Maximum City'?
That's the name. It purports to be reality because he appears to have done journalistic exploration but it's a misleading book, full of half-truths and perceptions that don't hold ground. It's a very dangerous one to my mind because it gives the impression of Mumbai as if it was a realistic one; it's not. He wants to run away from the realities in Mumbai, he wants to feel safe; yet he wants to write about this city. And that chapter where he talks of (Bal) Thackeray...I was very sorry to read that chapter. He makes Thackeray out to be some clown, makes a laughing stock of him when the reality is that Thackeray is a terror. It's a creation to entertain readers.

Speaking of Thackeray and your unsparing criticism of his ideology and methods reminds me of your statement on Narendra Modi. Do you still stand by it?
Oh absolutely. It's good that I don't have weapons and no one gives me any but yes, if I had a gun, I would still put it to Modi's head. He's a butcher. But everyone has conveniently forgotten that; he has become the poster boy and is considered the future president of his party. Same goes for Thackeray. People give them respect, national importance, touch their feet. It makes my blood boil. Are we totally without a conscience? See the Srikrishna Commission report on the Mumbai riots. Everyone's forgotten the carnage, forgotten Thackeray's role, even his political opponents do not invoke the report to fight him. This is also how I am seized by helplessness.

You are writing a new novel, after decades...
I think it's going to be a novel. I never really know what form anything will take until it happens. I have put down about 150 pages of something but I would hesitate to call it a novel. And, I don't have a name for it. In the sense that I don't name my novels, they are simply called Kadambari Ek and Kadambari Don (Story 1 and Story 2).

You often spoke of your Nehru Memorial Fellowship years with fondness...
Yes, they enriched me considerably. The fellowship took me to Bihar, often with JP. I would get him to talk endlessly, I met people of all kinds, criminals, politicians.... Saw the harshness of life, the bitter realities, the power play. ..all that seeped into my writing. But I learned an important lesson—not to generalise.... I keep recalling JP's words to one of my questions on India: "I don't know about this country. Ask me about Bihar and I may just be able to tell you something. Ask me anything about Gaya and I will tell you." I am not an expert, so I stay away from generalisations.

But do you see the human situation becoming better?
(Thinks long) No, I don't. We'll all do our work, write or whatever, but the human species has a great capacity to deceive itself. For years, we Indians deceived ourselves that our bright future is just round the corner. My generation was a generation of dreamers and idealists, we sort of remained in that mode. Even the most intelligent minds believed in dreams, ideologies, knowing they were useless. But some of us need illusions, some fiction. I am happier in the real world.