It's Fine, The Mezzanine

Even while analysts differ over Q2's vitality, big investors are looking at the next fiscal 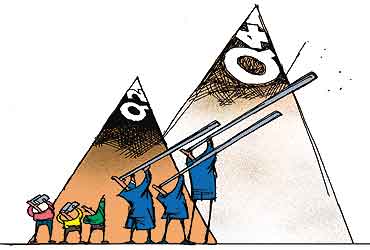 All eyes are on the Q2 results. Almost everyone is expecting the second quarter (July-Sep) figures this fiscal to further trigger the bullish Sensex. Even Union finance minister P. Chidambaram said recently that the quarterly corporate performance is expected to be good and, hence, the stockmarket would continue to boom. The initial announcements by firms like Infosys and TCS last week seemed to be in sync with such expectations. Both the tech majors posted topline and bottomline growths that were way above the analysts’ estimates. Investors are now eagerly awaiting other firms to announce their results over the next few weeks.

So, does that mean that the Sensex is in for another upwardly spin and will cross the 10,000-point mark?

Not really. In fact, one’s not too sure. The reason: analysts contend that the Q2 figures have already been factored in in the current valuations. And the existing stock prices reflect what institutional investors are forecasting for the quarters in the next fiscal (2006-07). It’s only the small investors who are focused on the immediate results. Explains Jayprakash Sinha, associate VP (research), Kotak Securities: "We are categorically saying that the current valuations are stretched, and these (Q2) numbers have been taken into account in the existing prices. Therefore, despite the (initial) good results, there’s been no great movement in market response. Hence, this quarter results will not improve market sentiments."

Most of the big investors are looking at what the companies will do in Q3 and Q4 this fiscal. Many are even worried about the next year. One, the US economy is expected to post a slower growth in the near future—and that is likely to impact the prospects of all the emerging economies, including India. In addition, a recent Crisil report suggests that "going forward, growth rates could slow down from the highs witnessed in the recent past". That explains why several analysts are basing their forecasts about stock prices on the 2006-07 corporate results. As one of them says, "We think future valuations will depend upon how firms are likely to perform in the next fiscal, or over the next several quarters."

If that’s true, does it mean that the Q2 results are not important? Not really. For, they will prove whether the economy and, hence, corporate performance, is on the right track. It will tell the institutional investors that there are no great surprises, and affirm that the India story is as solid as ever. And the fundamentals are still strong. Says a Delhi-based analyst: "The Q2 results this fiscal will just be a confirmation of what the FIIs think they know. It will tell them that there are no shocks, reiterate that India is still a lucrative investment destination."

It will also help investors differentiate between sectors that are likely to do well and those that are not. However, there is no consensus on this issue and analysts still have their favourites. "As a whole, Q2 corporate earnings are going to be good. Some sectors like IT and those related to infrastructure, construction, FMCG and cement will see an upward movement. Others like metals, automobiles and energy may see a decline in earnings," explains P.N. Vijay, investment analyst. But Shaheena Mukadam, head (research), IDBI Securites, says: "We might see some disappointment with regard to the FMCG sector and the effect of good monsoons will only be reflected in the subsequent quarters."

Sinha of Kotak Securities feels that while banking, capital goods, large IT firms, cement and auto ancilliaries are likely to grow at a faster pace in the near future, other sectors like pharma, oil & gas, and metals may face pressure. But then others think that cement might be a disappointment. And senior managers in the auto sector—especially passenger cars—are sure that growth is likely to be lower this fiscal compared to the previous year. "There could be some surprises this quarter (Q2)," says Nandan Chakraborty, head (research), Enam Securities. Adds Sanjay Sachdev, CEO, Principal PNB Asset Management: "The results are relatively mixed. Some pockets of the economy are doing pretty well. However, the areas of concern are the consumer sectors like auto, which are slowing down."

A few analysts are concerned about the growth in the infrastructure sector. "If the growth is as per the estimates made by government committees, we should be fine. But the problem has been with implementation that’s lagged behind expectations. If we want good overall growth, we need connectivity, be it in telecom or roads," says one of them. Others indicate that the real problems lie on the macro side. Vijay feels that the high current account deficit is putting undue pressure on the rupee. "Also, inflation and the exchange rate, mostly forgotten in the Indian context, are coming back into focus. Both are issues that fiis look at quite keenly."

In the final analysis, everything will depend on the overall India story when it comes to huge FII inflows into its bourses. That may come from the economy’s three pillars of strength. One is the strong GDP growth that is led by manufacturing and services. As the monsoons have been normal, agriculture will pitch in. Two, the benign interest rate regime attracts more foreign money, which adds to stockmarket liquidity. Finally, a near-stable rupee helps, as the FIIs are cagey about losses due to the weakening of the local currency.

So, it’s not about immediate quarterly corporate earnings. It is all about the near future—both in macro and micro terms. For instance, the real investors are looking at corporate earnings over the next few quarters, they are analysing the macro indicators over the next few years, they are scouting around for obstacles that might derail the current bull run. Q2 happens to be just another not-so-important peak on that graph.