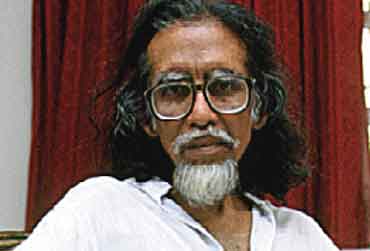 outlookindia.com
-0001-11-30T00:00:00+0553
O.V. Vijayan wrote fiction in Malayalam, but drew cartoons mostly in English. I asked him once if he was ever tempted to write in English like some Marathi writers. Usually tentative, Vijayan was firm in his reply: "For me, fiction can only be written in Malayalam, however underexposed the language is." This was at his house on Delhi's Satya Marg. Vijayan was sitting with Pooh on his lap. The Siamese cat, the only pet he is known to have kept, was looking more philosophical than her master. But secretly I felt that a tamed zebra would have been a more suitable companion for him. Ink on paper, whether to draw or write, Vijayan at his best choreographed mesmerising moments in black and white.

When did Vijayan first break into the Malayalee mind? My guess is it was with a cartoon and not one of his stories. In 1966 (he hadn't come out with a novel yet), India was experiencing a food shortage, and the historically cereal-deficient Kerala suffered most. Malayalees, overly dependent on ration shops for their daily diet, were numbed when they heard the government had reduced the fortnightly ration to six ounces of rice per adult. Meanwhile, in faraway Soviet Union and the US, they were competing to launch artificial satellites. A couple of days later, readers in Kerala woke up to a cartoon by Vijayan in Malayalam daily Mathrubhumi: a man perched on a satellite in outer space, peeping through a telescope at the earth, tells his friend: "On that planet, there exists a form of life that lives on six ounces of rice."

It was one of the earliest intimations of Vijayan's genius. He wasn't entirely unknown even then, being part of a group of very gifted Malayalam writers, all of whom happened to be living in Delhi in the sixties. Together, they fashioned what was later reckoned to be the Golden Age of Malayalam fiction. They used to meet at the Kerala Club in Connaught Place to read aloud from their work and listen to some probing criticism.

In 1968, Mathrubhumi Weekly began serialising Vijayan's first novel, Khasakinte Itihaasam. The novel challenged the reading habits of the day and it wasn't until the fourth or fifth instalment before its strangeness gave way to awe, and readers realised that they were witnessing a classic in the making. Around the same time, a not-so-successful Colombian novelist, with four novels to his name, was trying his luck for the fifth time. The Legends of Khasak impacted Malayalam fiction in the same way