It's Cold In Cyberia

The pen became an abstract blade. And as it slashed through the undergrowth, the vegetation kept changing. 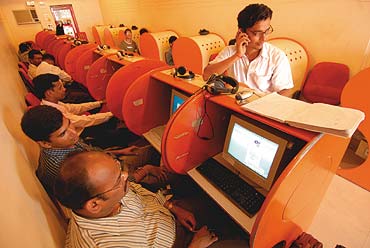 outlookindia.com
-0001-11-30T00:00:00+0553
Blogpost: October 2, 2006
Was cleaning out the cupboards and found stuff I had forgotten about—old diaries from 1995, letters written in 1997. It felt so strange, looking at my own handwriting. Can't remember the last time I handwrote anything beyond shopping lists. Just for fun, sat down and tried to write this blog post out by hand—but after a minute my fingers started aching. How on earth did we manage before keyboards?

In between the diary pages, there was this: a greetings telegram. WSHING YOU A VERRY HPPY DIWALI, HOPE YOU GT THE SARII AND THE CKES. Clearly, the post and telegraph office didn't use spellcheck back then.

God, the cell just buzzed again. Twelve Shubho Bijoya smses, seven Happy Dussehras, one "May the Goddess enter your soul in a cleansing way", which makes her sound like a packet of Surf.

Got to go see what the girls are up to on MySpace.com*—it's become such a default for networking online, can't remember the last time I logged onto my Friendster* account. We were supposed to meet for a concert, but Swati's page says she's still stuck in Gurgaon. Might blog some of the diary stuff, if I can read my own handwriting.

Deciphered the diary—and apparently I discovered Telnet exactly eleven years ago. Remember Telnet? It was a standard Windows blue screen split in half. If you were on an office network, you could message your colleagues in Bombay and ghost lines of type—there was a time lag—would come back. It was slower than a snail with fractured limbs, but we thought it was so cool. It beat the hell out of Mukherjeeda trying to connect us on that ancient phone system. Every so often the network would go down and the lines of ghost type would get stuck in mid-sente ...just like that. Pretty useful if you wanted to end a conversation fast, though, not like today when everyone's on chat, the mobile, tracking you on MySpace* or Orkut* or reading your blog to see if you updated that when you should have been finishing the project report. I miss the old days.

Oh, maybe not. Look at this, from the diary:

Happy New Year, I don't think! Spent most of it at the std booth trying to call Shahana and the gang for auld lang syne. Everyone in Delhi had the same idea, would've ducked but the greeting cards we posted haven't reached yet. Got through at 1.15 am to find Shahana was asleep. Too many people in line to try the rest. Back at party, someone suggested using a 'cellular mobile' phone. Maybe I should get one. Or maybe they're just a passing fad.

Read more of the diary—and found this!! To think I crib about how slow surfing the Net at broadband speeds is these days.

Sick of Netscape Navigator, but this Internet Explorer thing isn't much better. We spent hours trying to download a map today, listening to what some writer calls "the baby bleeps of the modem" as the connection refused to go through. Finally managed to log on—and the map we needed took only 20 minutes to download! You just have to be patient. The designers were trying to download a Sholay poster: one hour on a stable connection, and all you could see was the top of Viru's head. They'll be there all day.

Tried out this new Hotmail application everyone's raving about. It's fun, sending messages to friends that they can read instantly, but 'email' seems so informal. It won't do for serious business, we'll need proper letters.

Now that I'm on a nostalgia trip, here's some stuff I found in one of my first email account archives...

Guess where I'm sending this mail from! Knew you guys would be worried about the landslides in the hills, so fretted all through the drive on the Ladakh road and missed the most spectacular bits. We stopped at every std booth on the road up to Manali but something's wrong with the lines, I couldn't get through.

So we finally drive into Manali, and then I see it. Small, hole-in-the-wall that says 'Cyber-cafe'. One machine, privacy provided by a greasy plastic curtain, the owner's doing his puja when I walk in. The charges are lower than Delhi—only Rs 30 an hour! The connections looking dodgy, so I'm going to hit SEND And please tell Mesho to stop sending me mails that contain the Happy Birthday virus, can't have my home PC infected again.

The cybercafe chap was right, I was wrong. Not that I was happy about it....

Why am I working on a holiday in the back of beyond, you ask? Because my boss knows Almora and Pauri—and Leh, where we're headed next—better than I do, and gave me a small map of all the cybercafes I can reach...and WORK from. Aargh.

And here's another old email, from yet another Himalayan jaunt—the mood had clearly improved on this trip....

Here's the lowdown on momos on the road to Nepal, in one crisp line: Stop at the cybercafes. Seriously. The best chai, momos and thukpa we've had haven't been at the local stalls, where it all tastes of chilli and oil, but at the cybercafes—especially the one 2 km before the border on the Indian side. And, despite your barbaric tastebuds, try them steamed, not fried. There's one every few km at most of the small towns—very much like the roads down south, if you remember—so just ask if they provide food as well as net access.

The problem with reading diaries, and letters, and early email, is that it brings on instant nostalgia. So I decided to send off Shubho Bijoya/ Happy Dussehra telegrams for a change this year, instead of the smses. Here's how they reacted...

jst got ur t'gram wot happened 2 ur pc did it crsh r sum thng? luv M'nkshi

Wassup? Got a telegram from you—lost mobile, been mugged, house robbed, what? Really worried, call immediately or email. The neighbours came out to see who'd died where, we haven't seen one of them telegram things for years.

Sigh. That's the thing about nostalgia. In the post-www world, it isn't what it used to be.

* for those born b4 1970, MySpace, Orkut and Friendster are online social networks—Ed

(Nilanjana S. Roy is a writer and critic)

And The Winner Is...