Austerity be damned, it's Balenos for HC judges 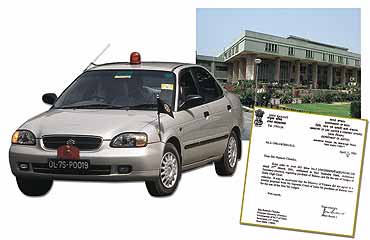 outlookindia.com
-0001-11-30T00:00:00+0553
What do Delhi High Court judges have that Supreme Court justices don't? Answer: Maruti Suzuki's top-end Baleno cars in which to zip around while the latter still trundle to court in their trusty Ambassadors.

The Delhi High Court's sleek new vehicles are a sore point with the state government, for several reasons. One being that state cabinet ministers who wanted Balenos were categorically told "no" on the grounds of (a) austerity measures; and (b) the luxury cars were not on the central or state government's list of approved vehicles. In fact, even when the Supreme Court wanted to buy Balenos for its judges, the ministry of finance refused permission.

The 27 new cars, at Rs 6.35 lakh a pop, were purchased without so much as a by-your-leave from the state government's finance department, raising the question of whether the high court's expenses were subject to the financial norms applicable to government agencies. The matter came to light when law ministry joint secretary P.K. Aggarwal wrote to the state government's finance department in September last year, asking whether the Balenos had been bought, and if so, how. The law ministry had reportedly received a demand from the Punjab and Haryana High Court for Balenos for its judges, citing Delhi as an example.

It was then that the state government took a fresh look at the court's revised budget estimates for office expenses for 1999-2000 and found that Rs 3.6 crore had been allocated but the expenditure was Rs 2.7 crore in excess of the previously sanctioned amount.

A junior functionary of the finance department had approved the purchase and released the payment [F.2/2000-fib(b)]. He has since been asked to explain his "lapse". The officer said he hadn't seen it fit to question the expenses of the court but admitted that since there was a doubt, he ought to have referred the matter to his superior. The fact that the payment was released should not be construed as approval, a senior law ministry official points out.

Delhi's finance department reviewed the case earlier this year and felt the purchase was irregular for two reasons. First, the approved models of staff cars purchased on rate contract (in effect, cost price) include the Ambassador, Premier Padmini, Maruti 800 and Maruti van. Second, a blanket ban on purchase of new staff cars has been in effect since December 15, 1999 [order no. F.14(9)/ 99-fin(b)], as a cost-cutting measure.

But the registrar of the high court took the view that since its budget is part of "charged expenditure", it didn't need sanction from the government's finance department. In effect, this means the high court chief justice enjoys delegated financial powers to incur expenditure which the state government has to pay. Curiously, the purchases were shown as being under the head of "office expenses" rather than establishment costs [letter no. 21678/C-6/cash/dhc].

The state government also wants to know what has happened to the replaced Ambassadors. State law secretary Bharat Bhushan was asked by the finance department to find out if the cars were declared condemned by a competent government agency or not. So far, the state government is still in the dark—and the very same law secretary has become registrar of the high court. He was not available for comment, despite repeated attempts.

The state government wrote to the law ministry, seeking a clarification. Principal secretary (finance) Ramesh Chandra, in his letter to the joint secretary concerned, observed: "A view needs to be taken whether the exercise of powers under Article 229 of the Constitution of India by the hon'ble chief justice for incurring contingent/ administrative expenses is subject to the laid down financial norms and canons of financial propriety. "

Before the law ministry could answer the query, the Delhi High Court asked for four more Balenos for new judges. Once again, the state government sought advice from the law ministry. It wrote back, saying: "The Baleno cars are not approved by the government of India and as per the latest economy instructions of the department of expenditure, no vehicle can be purchased, including replacement of vehicles."

There the matter rests for the present. Meanwhile, severely embarrassed by the discrepancy between Supreme Court and high court judges, the Centre has decided to provide Maruti Esteems for Supreme Court justices. Wonder what that says about the levels of esteem the judges are held in.