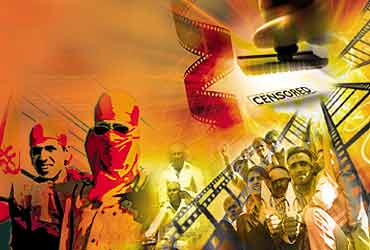 outlookindia.com
-0001-11-30T00:00:00+0553
With a friendly Congress-led government at the Centre and a liberal like Jaipal Reddy as information and broadcasting minister, documentary filmmakers did not anticipate trouble in entering their 'socio-political' films for the National Film Awards (NFA) to be announced next month and the panorama section of the International Film Festival of India (IFFI) scheduled for November. But surprisingly, the I&B ministry has refused to accept over 100 films entered by noted filmmakers like Sanjay Kak, Pankaj Butalia, Surabhi Sharma, Anand Patwardhan, Rakesh Sharma, Rahul Roy and Saba Dewan among others.

This is a rude shock for the filmmakers, some of whom had actively campaigned for the Congress in the last elections. A few of these banned films were even widely screened and are believed to have had an impact on the electoral outcome. In fact, in his post-election analysis, BJP president Venkaiah Naidu admitted that distribution of videos and CDs on the Gujarat riots did have an impact.

To be fair, Jaipal Reddy has been generous enough to allow the inclusion of video films for the first time in the panorama section. But he is still to remove the crucial clause which makes it mandatory for all films entered at the NFA and the international festival to have a certificate from the Central Board of Film Certification (CBFC). This clause was introduced by the nda government to keep out films on Gujarat and Ayodhya.

Although the I&B minister has assured filmmakers that the government would set up a committee to look into all aspects of censorship, pressure is mounting on him to offer immediate relief or face the embarrassment of a public protest from filmmakers. Already, the likes of Shyam Benegal, Jabbar Patel, Ratna Pathak Shah, Jahnu Baruah and Kumar Shahani have issued an appeal to the minister to withdraw the censorship clause. Points out actress Ratna Pathak Shah: "Censorship of this kind has to be debated. I'm not saying we do away with it altogether but there has to be a constructive dialogue. In this particular case, we're not talking about public screening. This is for assessing artistic merits. Why should the censor board be involved?"

On July 28, Reddy sent an emissary to some filmmakers assuring them that a decision to lift the censorship clause would soon be announced. However, the filmmakers say they will continue their protest till there is tangible relief.

According to filmmakers who have been kept out, the reason their films failed to get a CBFC certificate lies in the very composition of the board which was packed with RSS-VHP sympathisers by the previous government. As a result, all films which questioned the BJP's politics were kept out. Points out Saba Dewan, a member of Films for Freedom, a group of over 300 filmmakers that was formed to protest against censorship during the Mumbai International Film Festival (MIFF) earlier this year: "The BJP filled the CBFC with their own people. So any film that dealt with hate politics, Hindutva, Gujarat, Babri Masjid demolition or those exploring issues related to sexuality were not certified. Soon it was clear that the CBFC would allow only a certain kind of films to be certified."

A case in point is Rakesh Sharma's much-awarded film on the Gujarat riots, Final Solution. Despite having won top international awards including the Wolfgang Staudte award and Special Jury Award (Netpac) at the Berlin International Film Festival, it still awaits certification by the CBFC. Set in Gujarat during February 2002-July 2003, the film graphically documents the face of right-wing politics after the Gujarat riots.

"Forget about certifying, the CBFC has not even deemed it fit to watch my film. They've slapped me with notices asking me to state why I've screened my film in festivals elsewhere," Sharma told Outlook. Such an attitude, says actor Rahul Bose who joined the protest against censorship at MIFF, reflects the state's insecurity."During the Mumbai festival, the clause about censorship was applicable only to Indian films. Foreign films were exempt. I joined the protest because I thought that was completely unfair."

According to CBFC chairman Anupam Kher, an nda appointee, it has become "fashionable" for filmmakers to approach the media against perceived persecution by the board. Says he: "I may personally have a view on censorship but the fact of the matter is that there is a law of the land that has to be implemented. I'm not here to win a popularity contest. There has to be a certain code for what is acceptable for public viewing. If some films contain inflammatory portions and pose a danger to the law and order situation, the state has to intervene. I have a responsibility towards my position."

The argument about there being a law for censorship of films for public viewing too, says Rahul Bose, should be open to debate. "The law cannot be a static entity. It has to be dynamic enough to respond to the changing needs of society. If there are archaic laws that govern public viewing of films like those relating to alternative sexuality, there is a need to challenge them," he says.

This conflict between the CBFC and the filmmakers may lead to the kind of public protest that happened during the MIFF. At that time, Films for Freedom organised an alternative film festival, vikalp, and screened all the films that were banned at the official festival.

According to filmmaker Anand Patwardhan, the protest is not against this government alone but the issue of censorship as a whole. "It is not as if this government has introduced the censorship clause. It is time we debate and settle this issue. This is not about the BJP or Congress, but about freedom of expression," he says.

Following the I&B ministry's delay in revoking the censorship clause, the members of the Films for Freedom are discussing ways to voice their protest. Starting July 28, the Bangalore chapter of the Films for Freedom started screening their films in the face of protests from the Hindu Jagaran Manch which attacked the venue and tried to dirupt the screenings. But the filmmakers are not giving up. "The modalities of the protest are being worked out. But screening of films on alternative circuits will continue," says filmmaker Amar Kanwar.

Given that the Congress has been talking about cleansing the system and providing a platform for freedom of speech, the I&B ministry has very little choice but to revoke the censorship clause. Otherwise, the party will have to suffer the embarrassment of seeing its filmmaker friends taking to the streets in protest.