'It's Amitabh's Bid To Save His Skin' 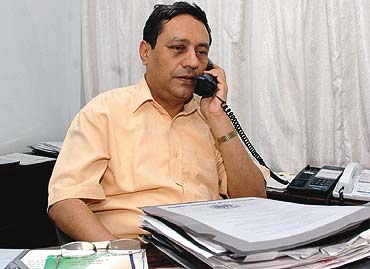 outlookindia.com
-0001-11-30T00:00:00+0553
Amitabh Bachchan says he has donated the Barabanki land to the gram sabha of Daulatpur village. What is the government's take?

No one is entitled to donate land that does not belong to him. Once Amitabh Bachchan's entry in the district land records was found to be forged, he ceased to be the legal or illegal occupant of that land. So how can he donate it?

But he claims that since the high court has stayed the Faizabad additional commissioner's order cancelling the allotment, it is in his right to donate the land....

Well, no sooner than the Faizabad additional commissioner cancelled the allotment, the land was once again reverted to the gram sabha on June 5, 2007. And that was well before the HC order came. After that it is status quo, as per the court order, so where is the question of altering the stay on the land?

What about this land donation move?

The letter he has sent to the chief minister in this regard states his intention to donate three plots of land. The government is concerned only with plot no. 702 which he claims was allotted to him in 1983. He cannot donate that plot. I fail to understand what is his real motive behind the move. Apparently, it seems the land donation is Bachchan's bid to save his skin. He is out to complicate issues and perhaps even try to misguide the court.

In his letter to the DM of Barabanki, Bachchan has sought to know the documentation he was required to produce to donate the three plots of land.

The government has nothing whatsoever to do with his two privately acquired plots. We are not paying any heed to his declaration about gifting those two plots.