It's A True Steal 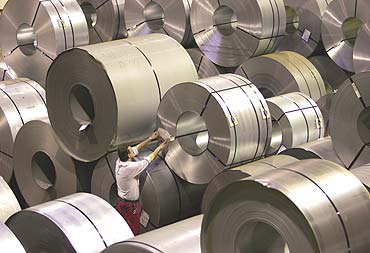 Question: Why did Ratan Tata bid so aggressively for Corus?

Answer: Because he desperately needed a major takeover to prevent Tata Steel from becoming a peripheral player.

Q: Why is takeover tycoon Laxmi N. Mittal setting up a greenfield unit in India?

A: Because he wants a presence in the sizeable Indian market.

Q: Why is Posco, with only two units outside South Korea, eyeing India?

A: Because India is a big raw materials source and a major steel consumer.

Like it or not, India will become the next battleground for global steel majors. It's here that they will lobby for radical policy changes, compete for marketshare, and invest billions of dollars to dominate the steel sector. India will be a base to source cheap raw materials—as also steel intermediates—for their global operations. More importantly, given the stagnant demand in the western countries, and a slowing down in China, India has emerged as one of the fastest-growing consumers.

Recently, China's Sinosteel announced its intention to invest $4 billion—the largest Chinese investment in India—to set up an integrated facility. Earlier, South Korea's Posco said it wishes to pump in a whopping $12 billion for a 12 million tonnes per annum (TPA) plant in Orissa, and Mittal, who is the leader of the global steel pack, unveiled his $9 billion India-specific vision. By 2020, India may witness an investment of $50 billion in the steel sector, and half of this will come from these three giants.

Not to be left behind in this race, Indian firms have begun to ramp up their operations. The state-owned Steel Authority of India Limited (SAIL) hopes to double its capacity to 24 million TPA in a few years. By 2009, Essar Steel aims to nearly double its annual production to 8.5 million tonnes. Along with Jindal Steel and Rashtriya Ispat Nigam Limited (RINL), the domestic players may invest Rs 55-60,000 crore—or $14-15 billion—over the next 4-5 years. And we haven't even talked about the Tata Steel-Corus combine!

For SAIL, the situation may be grimmer as it can be the first casualty in the no-holds-barred war between global giants. Not surprisingly, it has talked about a new initiative to form a joint venture with RINL and National Mineral Development Corporation (NMDC) to set up a 4 million TPA plant in Chhattisgarh. This, say experts, can become a trend, where competitors pool their resources to forge a new growth strategy.

While low costs—India is among the lowest-cost steel producer—is an attractive incentive, the new investors are also interested in India's rich iron ore resources which, at 24 billion tonnes, are the fifth largest in the world. What's important is the high quality of Indian ore with much of it having an iron content of 65 per cent or above. This puts India ahead of other ore-rich nations like Australia, Russia and Brazil. It explains why Posco and Sinosteel want to export ore, apart from making steel in India.

Argues an analyst with a steel firm, "The cost of setting up a new facility in India is 35-40 per cent cheaper than other locations. India's is a demand-pull situation. Domestic demand is being fed by the construction and automobile sectors." Until recently, India's per capita consumption of steel was a low 38 kg, against 400 kg in the US and the world average of 140 kg. But that is changing fast and India's consumption is estimated to jump from 50 million tonnes to 110 million tonnes by 2020. Agrees J. Mehra, director, Essar Steel, "The beeline is because India is a big steel consumption market." Considering the current growth rates, the projections may be higher. While the 2020 estimates are based on an 8 per cent annual growth, the rate today is 11-12 per cent. In February 2007, India's production rose by 13.4 per cent against an average of 8-9 per cent. Adds Mehra, "Therefore, a lot of investments have been promised and everyone is trying to put a foot in the door."

Possible dampeners: a short-term slowdown due to government's measures to immediately control inflation, and a medium-term impact due to rising interest rates which has made housing loans dearer and, in turn, adversely affected construction activities. Explains Chetan Bijesur, who heads manufacturing division research at FICCI, "The 13 per cent growth rate may not be sustainable because the credit squeeze is likely to hit all sectors. As steel firms are using external commercial borrowings (ECBs), the move to control ECBs to curb inflation may hit the companies."

At present, there's a tussle between the newcomers and old-timers in the policy arena as the proposed investments by global giants are yet to take off. One of them relates to access to ore. There are two aspects to this issue, the first being the demand of the foreign firms for exclusive mining rights. While the smaller steel producers claim that they are being edged out due to exclusivity granted to the big guys, the latter contend that their manufacturing operations cannot be viable without it.

The second debate is about the necessity of iron ore exports. There's a growing concern among the Indian Steel Alliance (ISA) that India's ore base may get exhausted in the next 20 years. Estimates indicate that the annual 100 million tonne export target envisaged for 2020 was reached this year itself. The ISA has suggested that exports should be controlled; in fact, it has asked for a gradual phase-out of exports by reducing them by 15 per cent every year and reach a zero export level by 2011-12.

However, the pro-exports camp says that it earns substantial foreign exchange for the country and, hence, shouldn't be curbed. Moreover, as Indian firms buy out major steel firms in Europe and the US, they will require quality ore to make value-added products that will be sold in the developed markets. This will only help the Indian cause by establishing the Indian brand and making global operations more competitive. In the end, it will lead to the making of stronger Indian steel MNCs.

Another policy-related worry is on the land acquisition front. With a raging debate on special economic zones, as also delays due to farmers' protests against large projects like Posco and Tata Motors, the steel projects may be in for a rough period. Even the progress on Mittal's 12 million tonne plant has been slow despite India's open support to him during his controversial-but-successful bid to buy out Arcelor. It seems that the future of the planned steel projects will be decided by politics too, not economics alone.

There's The Lord, And His Gopis