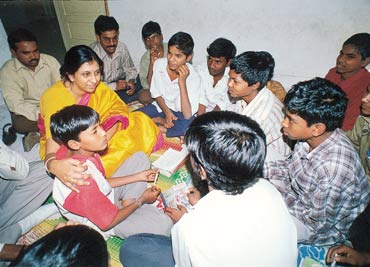 As its name implies, the Livelihood Advancement Business School isn't just another rehabilitation centre for deprived classes living in urban environs. For, the school does not stop at just promoting literacy among the children, rather, it aims to ensure them a choice of a profession and build their lives as self-sufficient citizens. The school's genesis lies in years of personal experience. After having worked for 13 years at some of the well-known child and community development initiatives in the national and international ngo sector, Nalini realised that mere funds and dedication weren't enough to make a real difference in the lives of poor children and their families. While some gains were made, the programmes often didn't address the question of long-term self-sustainability of these families.

Says Nalini, "If urban development was to really be reflected in terms of safer, healthier and friendlier cities, then what was required was more than mere physical and infrastructural inputs. Investments had to be made to ensure that the poor were not left behind in the process of economic transition and growth; in providing sustainable livelihood opportunities for the youth and adult members." This means creating programmes which are cognisant of current markets and economy. Also, there was a need to involve more citizens and generate an awareness of issues that collectively affected their lives. How could these people be enthused to get involved and contribute—at their own pace—and feel that they are participating in the creation of a new social order?