That's 'fare war' in SMSese, as the fourth operator kicks in. But the long-term winner will be determined by its service. 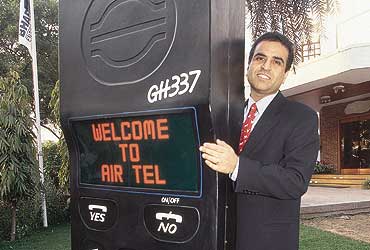 outlookindia.com
-0001-11-30T00:00:00+0553
Let the statistics start the talking while we ring in this telecom tale of aggressive competition and swashbuckling strategy in two cities. Out of the 7.33 million cellular customers in the country, a third are in the metros of Delhi and Mumbai. In this June alone, when the national market grew by 27 per cent with an addition of 350,000 users, 139,582 customers—or 40 per cent—came from the two metros. Clearly, the political and financial capitals of India are the most thriving cellular circles, with staggering potential.

If Anil Joseph, head of telecom practice at consultants Frost and Sullivan, is to be believed, Delhi can well have close to 5.9 million cellular subscribers, a nearly five-fold jump, in 10 years. And the Mumbai market could grow six times to touch 6.4 million.

Thus, even a 20 per cent share of the new additions in either city works out to a million subscribers within a decade for a new operator. And even if the entire lot runs up a paltry monthly bill of Rs 500, the operating break-even point is likely in the second year itself with full payback in nine years flat. Finally, if the subscriber base in Delhi and Mumbai doubles by the end of this fiscal, as expected, then cellular operators can earn Rs 480 crore a month!

With his finger on the magic numbers, no wonder Sunil Mittal, chairman, Bharti group, looked so composed in his greenish-blue suit as he launched his company's Airtel service in Mumbai on Wednesday. In effect, by entering one of the two most strategic markets in the country as the fourth operator (after Orange, BPL and MTNL), Mittal was unleashing a fierce cellular skirmish, and things can get only hotter.

Success in Delhi (6.7 lakh customers as of June 2002) has made Bharti move west to add Mumbai to its pan-Indian footprint while mega-combo BPL-Birla-Tata-AT&T is expected to launch their service—Idea Cellular—in the capital by September, once the spectrum is fully allocated. In both the metros, incumbents Hutch (known as Orange in Mumbai) with a combined 9.9 lakh subscribers and MTNL (with a little over two lakh subscribers) await the competition that's bound to trigger a windfall for all customers. And lest we forget, Rajeev Chandrasekhar of BPL Mobile (over 5 lakh subscribers) is also ready for the mother of all cell wars in Mumbai.

The era of cosy cartels will now move over for competitive one-upmanship. Exact strategies are difficult to gauge as everyone is hardselling only the macro blueprints. "The price battle will be significant only till a point," says Kobita Desai, telecom analyst, Gartner. "The real differentiators will be quality of service, portfolio of offerings and implementation of customer management and retention strategies."

Initially, the focus will be on expanding the market but new entrants like Idea (in Delhi) will also simultaneously aim at wooing existing customers from rivals. Such "churnings"—or moving across operators—can never be the key engine for growth but with 15 per cent customers generating 50 per cent of the total revenues, if a fourth operator churns even half of that lucrative lot, a quarter of the incumbent's revenues will evaporate. "Our comprehensive product superiority would inevitably attract heavy users and some churn is almost certain," says Sanjeev Aga, former CEO, Idea Cellular, who has only recently gone back to the Aditya Birla Group.

The fortification exercise is on in full swing with operators sprucing up their networks, offering attractive tariff packages and value-added schemes and services. Says Sudershan Banerjee, CEO, Hutchison Essar: "The stickiness of a customer is primarily a product of high-quality service, hand-holding and moving him away from the fence-sitting position." Thus, MTNL is busy expanding the capacity of its only switch in Delhi to 2.5 lakh from 1 lakh while BPL has already added 35 more base stations in Mumbai. Similarly, in the capital, Hutch is installing a fourth switch that would up its capacity by 2.5 lakh to 7.5 lakh.

By putting in over 20 per cent of its total Rs 2,000-crore expenditure—that's over and above the fresh licence fees—in the last few months alone, Bharti is clearly going for broke. "The main idea is to stay ahead of competition for at least six months," points out Hemant Sachdev, director (marketing), Bharti Enterprise. Thus the 350 and 300 base stations in Delhi and Mumbai respectively will never be a static number. Even Idea is willing to pump in Rs 750 crore over the next two years in Delhi alone. "With the radio frequency (RF) plan for total coverage from day one, we will provide Delhi subscribers an alternative to older networks with patchwork RF designs," says Aga. The company has also installed a switch with the highest busy hour call attempts or BHCA of over 0.6 million calls per hour with distributed processing, which rivals the existing traffic handling of the incumbents.

The focus will also be on offering varied but simpler services and better customer care. That explains the common billing facilities, the exclusive dial-ins, helplines, value-adds like multimedia messaging services and faster mobile Internet browsing via general package radio services (GPRS). The networks of Hutch, Bharti and BPL are GPRS-enabled, helping subscribers to download at speeds of up to 115 mbps against the prevalent speed of below 56 mbps. Bharti and Orange's new 32K SIM card also comes with a micro-browser on the mobile to get minute-by-minute feed on a whole spectrum of services without sending an SMS and waiting for its reply.

It may not be long when we see a full-blown tariff-centric guerrilla war although the industry still discounts its impact. But, for operators like MTNL, competitive price points drive business. "Affordability will continue to be our primary slogan but for survival we'll introduce the value additions," says J.M. Mishra, CGM(mobile service). Further rate cuts from MTNL are likely once the mobile investments get amortised by the end of this fiscal along with the year-end operational break-even.

Airtel's Mumbai launch has actually unleashed a tariff juggernaut: no roaming charges across India on its network; free incoming calls between Airtel consumers; 30-second pulse rate; free airtime for one international, national and local number sans any monthly charges. It's also offering free talk time worth Rs 50 upon activation with the corollary promise of returning the activation fee of Rs 225 after six months, and even the billing software will be modified within two weeks. According to Desai, this will be a key breakthrough for Bharti in the prepaid segment. "For six months, there'll be a set of captive customers who can be nurtured," she says, adding, "Leveraging on its geographical spread for across-the-board roaming facility may not be easily replicable by the others."

Hutch too is likely to follow suit with a similar pulse rate and attractive tariff packages. It has already consolidated its schemes under the Talk Flexi tariff plan which has a fixed monthly rental and flexible rates for different slabs of talk time. Hutch Share allows customers to get connection for friends and speak to them at just 25 paise per 30 seconds.

Under myriad brandnames like Orange's StraightTalk, BPL's Roamfree Local Dialling and Airtel's Subscriber Local Dialling, operators are also offering cheaper roaming calls at no additional costs. Only the network needs to selected. Such price differential of almost 80 per cent is possible as the call is routed directly instead of travelling via the home network of the roaming subscriber.

But in an environment of constant tariff cuts, price alone can't move mountains. "No battle can be fought only around tariffs. They can be repackaged but the whole game has to be on quality, branding and value-adds," says Anil Nayar, Bharti's president, mobility. Ergo, Airtel's marketing budget exceeds Rs 100 crore this fiscal while that for Idea is close to Rs 80 crore.

Despite the delay, team Idea is confident of breaking into Delhi. But as Hutch's Banerjee points out, the high penetration levels will be a dampener. Moreover, notwithstanding the flatter, compact landscape of the capital, the local authorities are disallowing rapid network rollouts. For Idea, though, while the prepaid segment will be the driver for growth, special post-paid products will be offered to the corporate or heavy user segment, apart from personal and the small and medium enterprises sector, hitherto untapped.

Their simple message: at a time of intense competition, let an idea change your life!