'It'll Be A Shock Treatment For The Left' 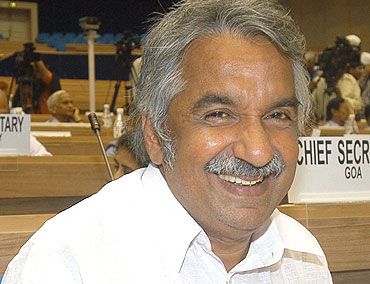 outlookindia.com
-0001-11-30T00:00:00+0553
Opposition leader from the Congress-led UDF Oommen Chandy has had 18-hour campaign days of late. The quintessential 24x7 politician, he spoke to Outlook. Excerpts:

What is your poll prediction?

I can’t predict. But I can tell you this...the outcome will come as a shock treatment for the LDF.

There was never a strong slogan which can be described as a leitmotif of the Congress campaign?

No, we accorded top priority to a stable government at the Centre under the leadership of Dr Manmohan Singh. Second, we asked people to vote against the corrupt government in Kerala and the antediluvian policies of the CPI(M) that derailed all major development work and scared off investors. Then there’s the UPA’s specific contribution to farmers, textile and plantation sectors in Kerala. The NREGA and the RTI were part of the Congress manifesto, which the Left tried to flaunt as its achievements. Remember, had it not been for the Congress’s astute management of political contradictions, the UPA government would have come down long ago.

What is your assessment of the Left campaign?

The Left’s slogans against corruption sounded hollow. Even CM V.S. Achuthanandan, the crusader for morality in public life, did not act promptly on the sanction to prosecute Pinarayi Vijayan. The CPI(M), which had blamed our previous government for being soft on lottery kings, had no qualms in taking Rs 2 crore from lotto king Santiago Martin.

Do you think the CPI(M) coming to a secret understanding with Madani will have a negative fallout?

Yes, the last nail on the Left coffin was the nexus with the PDP’s Madani. A rare convergence of unwholesome aspirations...Madani and Pinarayi joining hands to finish off the Muslim League, the sober Muslim voice which has kept the community calm during times of emotional upheavals. The CPI(M), by allying with a political entity still under a cloud (Madani’s terror connections), exposed its lack of concern for national interests in what are very trying times. Both will pay for this. Just wait a month for the verdict.