Italy Of The Orient

Bright colours, culture, adaptability. What is it about India? 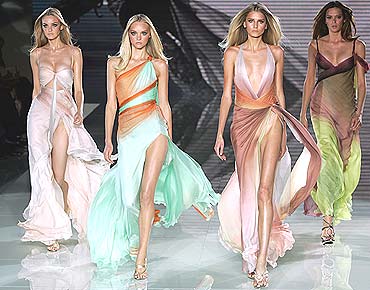 outlookindia.com
-0001-11-30T00:00:00+0553
Like many in the West, I think of India as an exotic place, full of colour and life. I think of the light, the way bright fabrics and embroidery are put on display and how the multi-coloured spices in the markets brighten up even a regular shopping trip. For me, India is full of bustle and positive energy, an exciting place which stimulates me creatively and spiritually.

India is dynamic, and where culture is concerned, India offers us in the West familiar art forms like music and movies but with a completely different interpretation—as in Bollywood films and popular music. This is very exciting for me. I love music and film, so I love to see a fresh and different approach to them.

I went to India for the first time last year. It was for a TV show called Lakme Fashion House in Mumbai, which was a kind of competition. I was invited to be a judge and to award the winner with an internship at Versace in Milan. What was extraordinary about the trip was that quite often when you visit new places you have a certain image of those places in your mind as to what they would be like, and most times the reality comes as a bit of a disappointment. In the case of India, it was the opposite—I had imagined a wonderful place of new sounds and smells and sights, and I got more than I bargained for! I am also a big fan of spicy food of all types so when I reached India, the first thing I asked for was a curry. However, spicy here and spicy there are two different things!


As a fashion designer, I work in a global industry, but the house of Versace is still a family-owned business, and this makes us different from the huge corporations which own many different fashion brands and have ambitious plans for global expansion. We believe in doing things the Versace way. We do this because we believe this is what our customers want—a fashion house full of personality which sees its customers as individuals, not just as a market to be exploited. 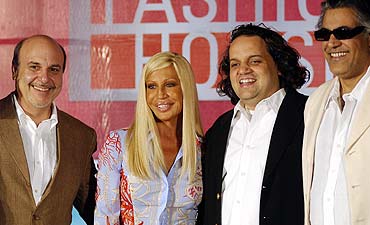 I have been inspired by India in my work. In its most obvious form, this inspiration manifests itself in my use of clear, bright colours and decorative embroidery. We source fabrics and embroidery from India, especially for our evening dresses and Atelier collection. But beyond that, I felt a sense of freedom in India which encouraged me to loosen up, and to embrace the idea of freedom of expression in the way I put the clothes together. Things no longer have to be only formal or casual or sporty. The modern way of styling your outfits enables you to combine elements from different genres.

I hope my designs will sell in India, as we recently opened our first boutique at the JW Marriott hotel in Mumbai. I think Indian women would look great in Versace as they have an innate sense of glamour and elegance. Obviously, it is very important to preserve one's culture and traditions but I firmly believe it is possible to integrate the two sensibilities as they do in many other countries.

India has an air of mystery about it, and some of this no doubt derives from the idea that it is a land of spiritual beliefs. In an increasingly globalising world, perhaps India can symbolise an alternative way of looking at the world. I have become a more spiritual person over the past few years. If you have to struggle with personal troubles, you can develop an ability to stand back from yourself and look at the bigger picture. This ability—to understand why you do the things you do, why you behave and think in a certain way—enables you to break destructive and negative patterns of thought and behaviour and shows you that you do have a choice as to the kind of person you are. I don't know if this can be called spirituality, but it is the closest I have come to such a thing.

When I was in India, I felt there was a great affinity between the Indian people and the Italian people. We are both very passionate, and both very concerned about maintaining family ties and heritage. We are also both peoples who are survivors—whatever history has thrown at us, we have come through, adapting, evolving, developing. On a personal level, I have had to do this over the past few years, and on a national level, Italy is always in a state of flux (politically or economically). India has that sense of flux too—an ebb and flow of ideas, trends, power, politics, culture. That is why it is such an exciting place.

(As told to Seema Sirohi)

No Escape From Southasia