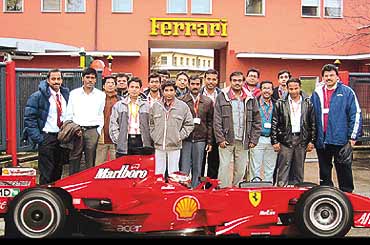 outlookindia.com
-0001-11-30T00:00:00+0553
They say Ferrari is not a car but a passion, red hot and racing. It is the ultimate accessory of the rich, the final word in style. Hollywood stars from Gregory Peck to Demi Moore have caressed it in over 70 films, adding to its iconic status and fuelling the uber fan following among car connoisseurs. Besides its passenger models—if you can call them that—Ferrari dominates the turbo-charged world of Formula One racing and holds nearly every record in the superfast lane.

But what's unknown is the influence of Indian hands, or rather brains, in this Italian domination of the track. A team of Indian engineers has been working for the past three years on the legendary car, helping hone the pace of the red racer, analysing and interpreting data and managing the vast array of computers hooked and linked to read every naughty nuance of the sexy machine. It may be glamorous on the outside, but inside the humming factory it is about the finer points of mechanical engineering, aerodynamics and electronics. No easy ride this one. The pressure can be artery-bursting because of the time factor—it is a race, after all.

Thirty bright and eager engineers from Tata Consultancy Services are now an integral part of the Ferrari team at Maranello, the headquarters of Ferrari's state-of-the-art factory. The Ferrari feather is a big one in the TCS cap, for it makes India's software giant also the first to enter the privileged world of F1, that too with the champ. It is a quantum leap, establishing TCS on the frontiers of technological innovation. Who would have thought that Indian engineers would one day be a part of the dream of Enzo Ferrari, the rustic Italian who went on to create a racing legend? When Ferrari won the Melbourne Grand Prix last month as the F1 racing season got under way, the TCS guys woke up at 4 am to celebrate, and with good reason.

"It is an opportunity of a lifetime," says Pitchiah Ramaswamy, the team leader, who moved to Maranello soon after the deal was announced in December 2004. "It is a dream of any mechanical engineer to work in Ferrari because of the challenges involved." Pitchiah was overjoyed the morning the call came with the offer. Sitting with teammates Rajiv Vemuri and Kannan Natrajan in a conference room next to Ferrari's nerve centre with hundreds of computers humming in the background, he describes the tough environment. "You have to be accurate the first time and only on-time delivery is accepted. You should be passionate and do your homework."

Obviously, TCS has tested well in this exam. Ferrari president Luca di Montezemolo told Outlook that Ferrari needs to work with the best suppliers world-wide to achieve excellence in all areas. "India has reached a high level of competence in information technology; this is why we started our cooperation with TCS almost three years ago for F1. Today our partnership with TCS is important in the development of both types of cars," he said. Antonio Calabrese, head of information systems of Ferrari F1, says working for "the most important brand" in racing requires special skills. "We've to fight with giants everyday," he says with a smile. The TCS team helps in simulation, computer-aided design, computer-aided engineering and software. "They are helping Ferrari design a better car."

The F1 car is not your average commuter vehicle where sophistication means air bags and tinted windows. It is said to be the most advanced car platform in the market, often compared to a jet engine in its complexity. Everything moves constantly under extreme stress and goalposts shift dramatically, testing not only the driver—Michael Schumacher just retired as Ferrari's ace last year—but all systems. Safety must go hand-in-hand with speed, with mechanical and electronic systems performing flawlessly. When head-hunting around the world, Calabrese heard about TCS from a satisfied client. "We were looking for a company which would deliver very specialised services, which had a huge knowledge of these domains," he said. He met TCS executives in Mumbai and was impressed by their proactive attitude, professionalism and the flow of information within the company. "They exchange and share information with other teams, which gives a boost to their knowledge," Calabrese said. 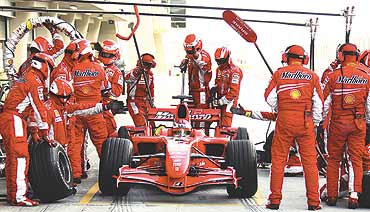 For TCS the challenge of associating with Ferrari was hugely attractive. Executive VP N. Chandrasekharan, who led the negotiations, told Outlook: "It was not about revenues, but about doing things at a very advanced stage. Our guys would get to work on new engine designs." Since building the engine and getting it to the market is based on the race cycle, deadlines are "extremely stringent". They've to be innovative as well as rigorous. After every race, the car spits out tonnes of data, which has to be interpreted accurately.

There was "a very good connect" from day one as the two sides met. Once the agreement was signed, Pitchiah and others headed to Italy. Calabrese was impressed when TCS hired Italian instructors on its own to give language training to the team. It's not easy for Indian companies to break into the European market, which is more "relationship-oriented" than the American market. But once in, the European experience can be more friendly and accommodating.

The relationship is blooming, it seems. "They are not an appendix of Ferrari, but a part of our team," says Calabrese. The motto at Ferrari is teamwork, because if one fails, another player can support you. "We don't want cowboys," the chief says emphatically. For its part, the Ferrari management has accepted TCS like family—their photos are featured in the glossy company report for 2006, and the cafeteria sometimes includes Indian dishes. As for TCS, the team has blended well in Maranello, where anything and everything is about Ferrari. Their families have adapted to the Italian way of life, even learning how to ski in the winter. As we sit down to lunch at a nice restaurant—bathed in red and decorated with helmets and car engines—Pitchiah, Rajiv and Kannan dig into tagliatelli in cream sauce and rice with balsamic vinegar with ease. And yes, a glass of vino rosso completes the gastronomical experience. You can say cheers to that.

Whispers Of The West Wind