It Were Six Men Of Hindostan... 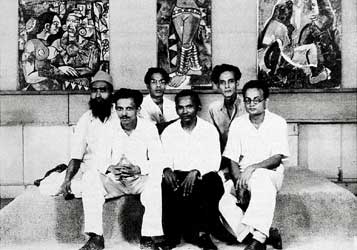 The Making of Modern Indian Art: The Progressives
By Yashodhara Dalmia
Oxford University Press Rs 3,750, Pages: 339
Was it a major movement in art? Or just a conflagration of the talents of lean and hungry men with fire in their bellies who came together briefly in Bombay on the eve of independence, stayed on in its afterglow, sparked fires in other artists and then went their own ways? The debate, at times cantankerous and petty, is still on about the place in Indian contemporary art history of the Progressive Artists Group—comprised of F.N. Souza, M.F.Husain, K.H. Ara, S.H. Raza, H.A. Gade and S.K. Bakre.

The group as such lasted barely three years: from 1947 through 1949. Yet as this painstakingly-researched and cogently-written book reveals, pag was no one-off, a mere flash in the pan. These painters were a product of their times—antsy to reject academic realism (introduced by the art schools established by the British) or the revivalist art of the Bengal School in their pursuit of the freedom of self-expression. The group attempted to, as Dalmia writes, "mark the passage of the age of nationalism and a disengagement of art from historical exigencies". Souza, whose brainchild pag was, put it in his inimitable way: "Our art has evolved over the years of its own volition; out of our own balls and brains." He, of course, had the most claims on the former—both on canvas and off it.

This lavishly-illustrated book is a scholar's delight. Dalmia, who has spent eight long years researching and writing the book, has placed the Progressives and the younger artists associated with them—such as Tyeb Mehta, Krishen Khanna, Akbar Padamsee and Bal Chhabda—in a historical context. She looks at the contribution—good or otherwise—of the old art schools in India to the formative years of modern Indian art. She also keeps what is happening in European art at that time and how it impinged on the imagination of the Progressives—and those around them—on her radar screen. Nor does the book stop with the unevenly Magnificent Six: Dalmia also finds artistic correlations in the works of artists who came much later.

The piece de resistance of the book, and a major find, is in its appendix: the selected writings of Rudi Von Leyden that were in the possession of painter Gulam Mohammed Sheikh. A World War II emigré, Von Leyden was a cartoonist who wrote perceptively on modern Indian art for three decades. He also encouraged many young painters, especially Ara, whom he supported financially. (Ara used to wash cars before Von Leyden became his patron. One of the surprises in the book is his fabulous portrait of Greta Garbo.) In fact, what is fascinating about these heady banquet days in Bombay was the Jewish interface with young Indian artists.

Von Leyden apart, there was Walter Langhammer, an art teacher who came to Bombay in 1938 as a director in the art department of The Times of India and who with his wife Kathe (she was Jewish) ran a salon on Sundays. Painters discussed their work and the couple showed them prints of Picasso. There was also Emmanuel Schlesinger, another patron of the artists who, as Dalmia writes, "introduced a European sensibility that was radically different from the Royal Academy of Art style taught in art colleges". Interestingly, the Prince of Wales Museum refused to accept Schlesinger's collection, which included works of Italian prisoners of war; they found it too "imitative".

Dalmia also seeks to take stock of what is modern Indian art: its emergence, underpinnings and the myriad factors which went into its making.Especially interesting is her exploration of the growing internationalism of modern Indian art. Her close examination of the work of her gang of six too is fairly exhaustive. But clearly what's most enjoyable about this book is the spirit of the time captured so palpably. We don't get just a picture of struggling artists; Dalmia extends her canvas to filmmakers, writers, theatre-wallahs and dreamers of the time.

It was indeed a heady cauldron of talent. And they fed on each other. Dalmia makes an astute comparison between Kala Godha (in the Fort area of Bombay which housed the Bombay Art Society and the Jehangir Art Gallery) with St Germain des Pres—and cafe society—in the between-two-wars-Paris when artists and writers spent hours talking about their lives and worked over endless cups of coffee, and wine. In fact, there was a symbiotic relationship between artists and other creatives. Take the Bhulabhai Desai Insitute: you could watch Ebrahim Alkazi's plays, see Ravi Shankar practicing, Waheeda Rahman taking dance lessons, Sakina Mehta running a book shop. It was here, Dalmia writes, that Husain painted the sets for Alkazi's Murder in the Cathedral. And Alkazi placed Husain's seminal work Zameen on the sets while Von Leyden commented on it. Bakre and Husain did the sets for Chhabda's film, Do Raha, with Nalini Jaywant. They even had Roberto Rossellini comment on the film: "Go live in a brothel for six months."

A must-read for art lovers. There's only one fly in the ointment: all the colour plates should have had titles and could have been organised a little more logically.

Erroneous Zones Of The Citadel